That in Catholic monasteries, not all are humble lifestyle did not hear only deaf. But there are places from which God is far. The nuns of one of the convents located in India, told reporters about his unenviable life and helplessness in front of lust priests. 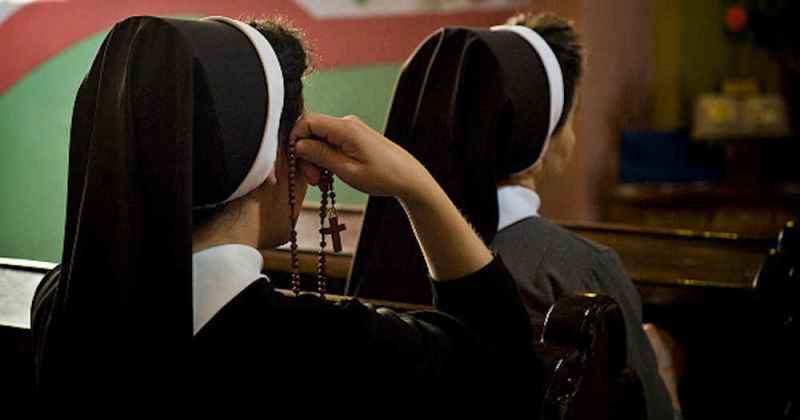 Indian Catholic nuns of the monasteries were subjected to systematic sexual violence. It lasts not a year or two, but women prefer to keep quiet about it. India provides a particularly fertile ground for rogues in cassocks. Traditionally, women in most States of the country the infringement of rights and in the case of violence against them, the shame falls not on the perpetrators and the victim. 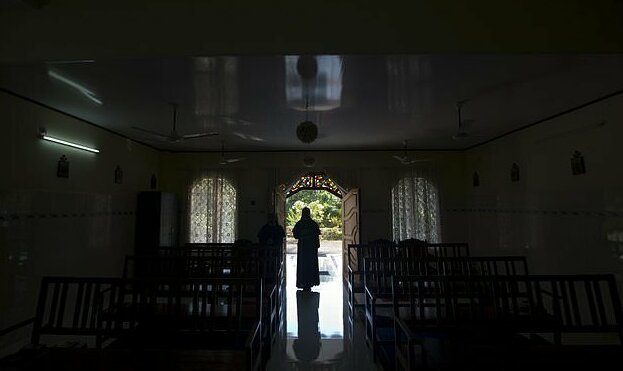 In the case of Catholic nuns still sadder — in a country with a population of 1.3 billion people, only 18 million citizens are Roman Catholic. Loud sex scandals negatively affect the image of Christians in the region and sisters prefer to remain silent about their troubles. In addition, complaints of sexual exploitation do not affect the funding of monasteries.

Many rapists have a high San and is free to dispose of meager budgets of the offices of the order, in accordance with their special rules. 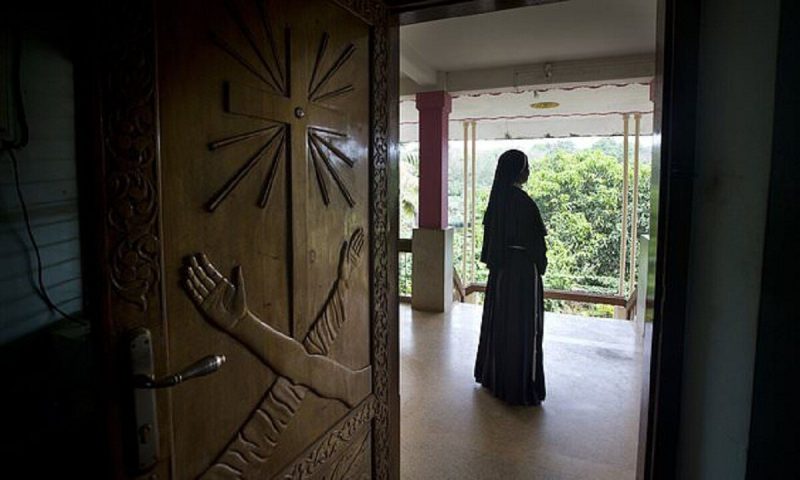 How to relate to the nuns, who spoke openly about the violence? Sister Shalini was Malakal, a theologian from new Delhi, describes the situation:

“Sisters, it is difficult to resist the sexual advances of the priest and it is impossible to accept them — both goes against centuries of tradition. Celibacy is the basis of religious life of Catholic nuns. Sexual experience, even obtained as a result of violence, can lead to isolation for women inside of the order and even the exception. You don’t know whether I’ll stay in the monastery, if he violated the vow of chastity, so young sisters are afraid to say about what happened.”

The nuns, who decided at a meeting with reporters, repeatedly appealed to the Church hierarchy with complaints of violence, but never received a response. The most serious criticism was a statement to the police says 44-year-old sister at the priest, who for two years, raped her at least 13 times. 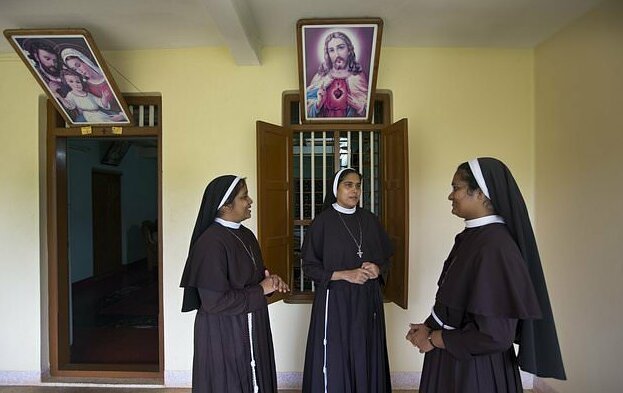 A woman supported by a group of nuns who had the courage to hold a demonstration demanding the arrest and trial of the rapist in the cassock. It would seem that the sisters have done a good thing and defended not only their rights, but also honor all who for years have suffered from actions of criminals. But suddenly most of the nuns and novices of the monastery were in hard opposition to demonstrandum, accusing them that they discredit their faith’s dirty linen in public.

But the biggest challenge was the attitude of the common people, who not only did not sympathize with defenseless women, but started to slack off. It was in Kerala, where the predominant rural population and many Catholics. After applying and demonstrating that women have been in their own area outcasts. 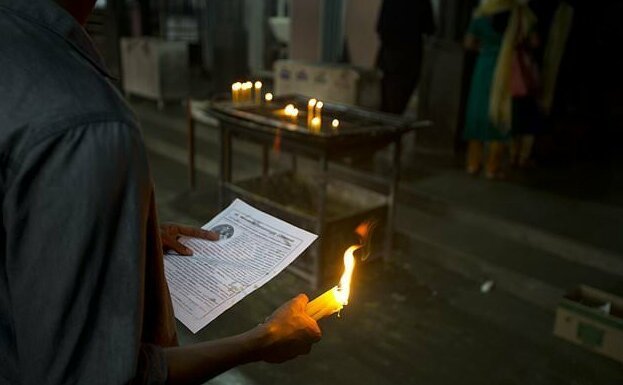 Moreover, they were accused of aiding the Devil and the desire to destroy the foundations of the Catholic Church in the region. Many of the nuns even began to receive threats by phone and emails. In the villages of Kerala, where a censure of the Christian community can get behind to show under clothes, the bra strap or too bold look, a nun, to talk openly about the rape by the priest, becomes the common enemy.

Sister Josephine was Vellanickal is one of the few nuns who do not conceal their name when communicating with journalists. The woman said that he had taken a vow 23 years ago, when I was a teenager. More than two decades, Josephine gave the cause of helping the poor and disadvantaged. Over the idea that his participation in demonstrations against the rapist it is a threat to the Church, a woman laughs and says: “We just have a cross to bear and I want to die with the sisters”. 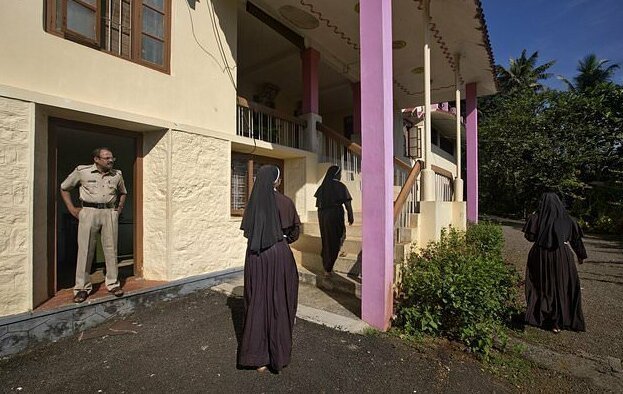 For the first time she faced violence in the early 1990s, when I arrived in the direction of Catholic schools in a large convent in new Delhi. Young Josephine was to take the vows, which, according to the rules, preceded by a week of solitary prayer. At the time of training the young novices appoint a supervisor who monitors the performance of all the rites necessary helps and guidance.

The girl was appointed mentors 60-year-old priest. Josephine remembers that felt immediately next to the Minister of the Church uncomfortable. Instinct did not fail her — just a couple of days after arriving in the monastery, got drunk to a bestial state, the pastor began the night burst into her room, demanding to let him in. 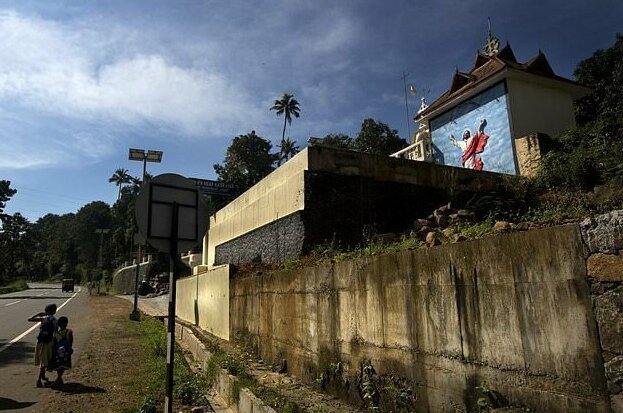 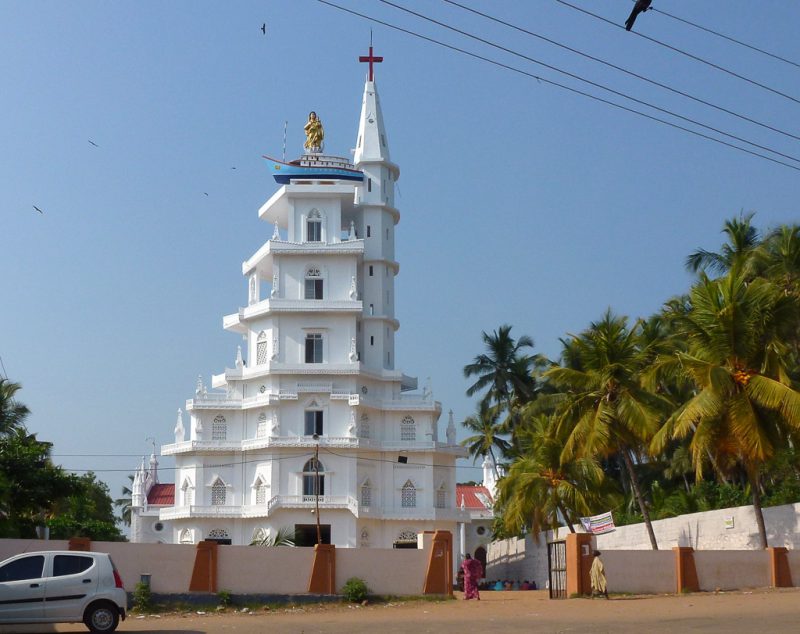 During an interview with the abbess, Vellanickal told about the incident last night and the girl was allowed not to see her abuser. In addition, the then naive Josephine, who believed that faced with a special rare case, wrote an anonymous complaint to official Church authority. Very soon the priest who attacked her, disappeared from the monastery. Then the girl believed that he was punished, but later realized that her mentor just moved to another place in order not to provoke scandal.

About its history nobody the monastery did not say all behaved as if nothing had happened. Josephine thought her story could be a warning to other girls, but it was hushed up, and she was too scared to to do something on their own. For many years after that sister Josephine never told anyone about this case. 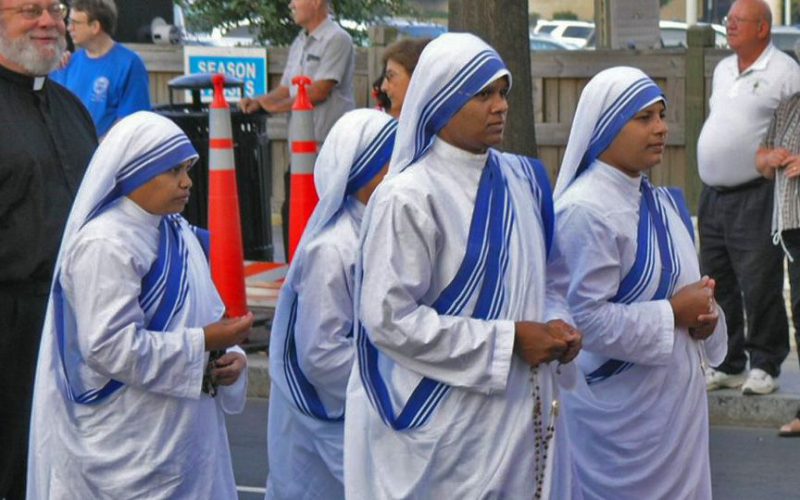 Meanwhile, the sexual abuse of nuns — it’s not nonsense, but quite normal for the Catholic monasteries. Sister Josephine was just lucky that she escaped with a fright. The most disgusting that such action is not considered a serious offence and the rapist often gets off with disciplinary action.

One of the infrequent occasions when the priest brought to justice is the rape of a nun by Bishop Franco Mulakkal in one of the monasteries of Kerala. For his crime he was sentenced by Indian court to… 3 weeks in prison. After this period, Franco was released on bail. Of course, his guilt, the villain is not recognized, and continued to perform his duties, though in a different state of India.

In one of the most idyllic places in the state of Kerala, near the town of Korabelna, the isolated monastery of St. Francis. In this quiet of the monastery there is a room No. 20, which all sisters of the monastery know as a place of historical violence. It is here that Franco Mulakkal, which had the highest in these parts of the San, repeatedly forced to have sex with one of the sisters. 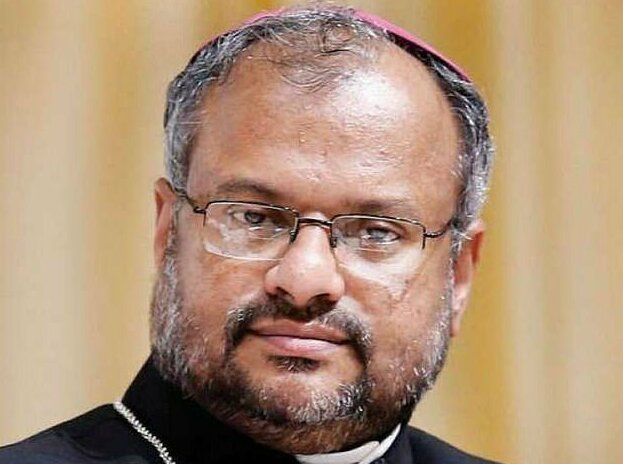 In the monastery of St. Francis, the Bishop patronised 81 sister sometimes, she visited the monastery. In each of his visits to the monastery, Bishop Mulakkal were assaulted the same sister in her room. It lasted from may 2014 to September 2016. After the publicity and ridiculous punishment Mulakkal not only did not feel covered with shame, but on the contrary — tried on the Martyr’s crown and the image of offended virtue.

“I’m going through suffering and ask all to join me to pray to the Lord that the truth triumphed.”

This is the only review that managed to get media representatives from the rapist after his release from prison on bail. In Kerala most of the parishioners believe that the Bishop was the victim of a woman who has learned to harm the Church by Satan himself. 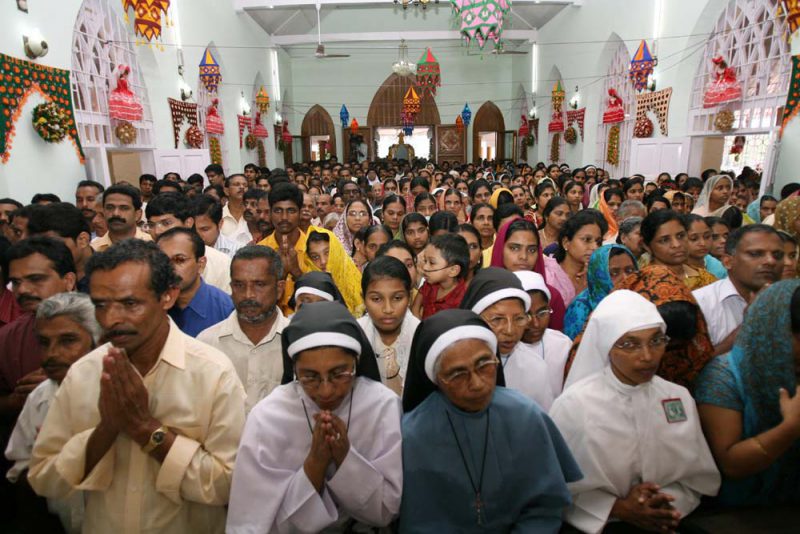 In prison Mulakkal was bored — he had the crowd of faithful who wanted to support the pastor in difficult times. Upon release from custody, the Bishop was welcomed by the crowd of enthusiastic parishioners. The sister who was the victim of a rapist, supported only 6 inmates of the monastery. They talk to reporters on her behalf — the victim can’t talk about his misfortune.

The nun that was raped by the Bishop, a native of Kerala. Her path to the monastery is quite common for these places: she was one of the older sisters in the family with five children. Her mother died at a time when she was still a schoolgirl. Because father was while in the army, children have distributed to relatives and the girl went to his cousin, a Catholic priest. Under his influence, the girl decided to leave the monastery, which he did in 1994. 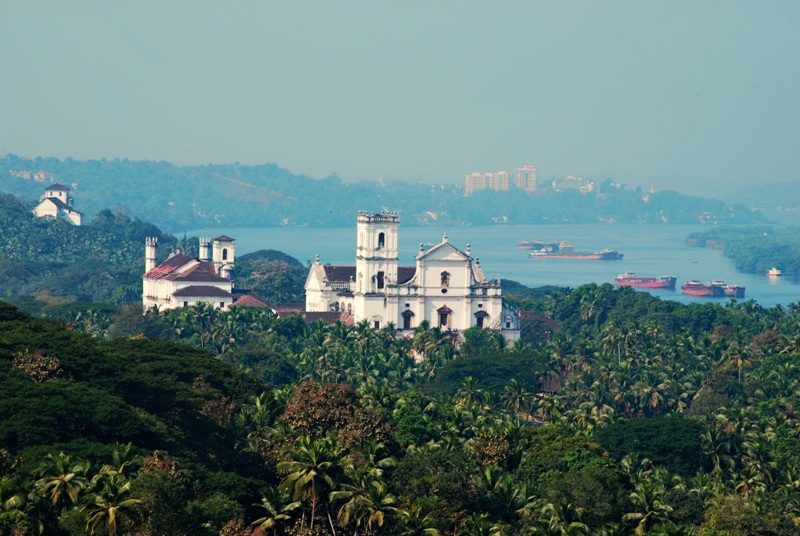 Before the first case of violence no communication between a nun and a Bishop, nor was there any informal meetings alone did not occur. Myself sister, telling this story to add:

“He’s a powerful man, what could she do? says one of the nuns. And whatever became of her, if she ran away home? We asked him many times to stop, but he still continued”.

After repeated complaints to higher Church court, unanswered, the sister filed a police report. The result of the investigation and trial of high-ranking villain we have already mentioned above. Sisters do not lose hope, as someone with high spiritual dignity, encouraged them, promising to investigate. But, women are immediately warned that the trial could take years and end in nothing — examples in India and in other countries where there are Catholic monasteries. 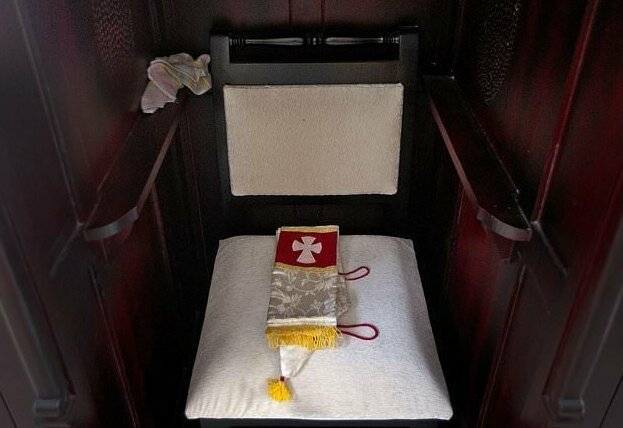 Cases such as that described, lead to the fact that nurses are leaving the monasteries, returning to secular life. After the violence within the walls of the monastery, their lives are broken — they can’t stay in the monastery, where their lot was fear and shame, but in ordinary life they are not welcome. In the end, the former nuns had to leave their homes and go where nobody knows them. 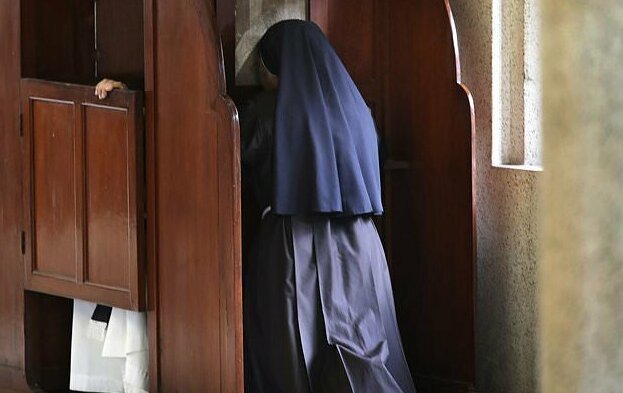 In ecclesiastical centres, which receives information from different monasteries in India, no one knows exactly how frequent incidents of violence in the monasteries. Archbishop Kyriakos Bharanikulangara from new Delhi, asked by reporters about such statistics, answers very evasively. Major Church leader calls out from sporadic and occur infrequently and haphazardly here and there. No response from the Archbishop no one was expecting a wall of silence surrounds most of such crimes and only a few of them are known.