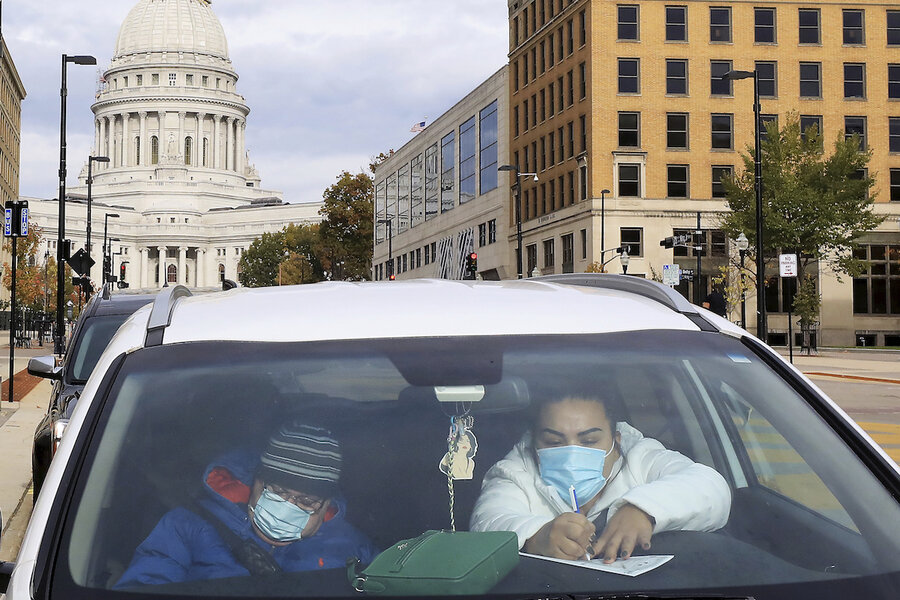 Democrats and Republicans in the battleground state of Wisconsin were pushing Tuesday to get 320,000 outstanding absentee ballots returned by the close of polls on Election Day, after the United States Supreme Court refused to extend the deadline to receive and count ballots as Democrats had wanted.

“This is an all-hands-on-deck final push,” said Ben Wikler, who chairs the Wisconsin Democratic Party, which has been advocating absentee voting more aggressively than Republicans.

But the message is the same for Republicans who decided to mail in their ballots amid a surge in coronavirus cases in Wisconsin.

“If you do it absentee, do it now, do it quickly,” said Andrew Hitt, chairman of the Wisconsin Republican Party.

Democrats argued in a federal lawsuit that more time should be allotted for ballots to arrive by mail and be counted because of the challenges posed by the coronavirus pandemic. Republicans countered that voters had plenty of options to vote on time and that the rules shouldn’t be changed so close to the election. The Supreme Court, in a 5-3 decision Monday along ideological lines, affirmed an appellate court ruling that had blocked the extended count.

It’s not clear if the ruling will benefit one side or the other in Wisconsin, which President Donald Trump won by fewer than 23,000 votes in 2016, said Barry Burden, a University of Wisconsin-Madison political science professor and the director of the Elections Research Project.

Mr. Trump was campaigning in Wisconsin on Tuesday and his Democratic challenger Joe Biden was scheduled to visit the state on Friday.

“The fact that Democrats are using mail voting more than Republicans are suggests that the Biden campaign would be hurt more by ballots that come in late,” Mr. Burden said.

However, since the appellate ruling nearly three weeks ago, Democrats have been working under the assumption that the deadline for returning ballots would be 8 p.m. on Election Day and have helped shatter the state record for returning absentee ballots, Mr. Burden said.

Still, there were 320,000 outstanding ballots as of Tuesday, which amounts to 18% of the nearly 1.7 million absentee ballots requested. In the April presidential primary election, 9% of all requested absentee ballots were not returned. In that election, 1.7% of all ballots returned were rejected due to missing signatures or other deficiencies that were not fixed in time by the voters.

The ruling setting the 8 p.m. Election Day deadline for returning ballots means there will “definitely” be some that aren’t counted, Mr. Burden said. In Wisconsin’s April primary, some 80,000 ballots arrived after Election Day.

The U.S. Postal Service district that covers most of Wisconsin has not met the agency’s goal of having at least 95% of first-class mail delivered within five days during the month of October, according to postal data. The most recently available delivery data showed on-time delivery rates at 84.6% in the week that ended Oct. 16, right as ballots were moving through the system.

Republicans and Democrats are urging their voters to get their ballots in immediately.

“The rules haven’t changed,” Mr. Wikler said. “What changes is that there is now a certainty that ballots need to arrive by the time polls close. There is now a wave of public attention on that fact.”

Republicans, who opposed extending the counting deadline, were also urging voters to return ballots, or follow through on their plans to vote in person.

“We continue to monitor who has outstanding ballots and we will push them hard this last week though text messages, robocalls,” Mr. Hitt said.

Some of the 320,000 outstanding ballots could have been sent to people who requested them in the spring but have now decided to vote in person, Mr. Hitt said.

“I suspect there will be quite a bit of that, especially on the conservative side,” he said.

The Wisconsin Elections Commission said that Tuesday was the practical deadline for voters to return their absentee ballots by mail, which would allow one week for it to be delivered. Voters have until Thursday to request a ballot by mail, but that does not likely leave them enough time to receive it on time.

Voters have numerous options for returning the ballots, other than by mail, including at secure drop boxes, their municipal clerk’s office, or dropping it off at their polling place on Election Day unless it is a city, like Milwaukee, where ballots are counted at a central location.

Voters can also always cast their ballots in person on Election Day, even if they requested and received an absentee ballot.

The Supreme Court’s ruling also means that poll workers can’t come from outside the county where they live. The Wisconsin Elections Commission has been operating on the assumption that poll workers must come from the county where they live, said spokesman Reid Magney. He noted that there are other jobs at the polls which do not require county residency, including greeting voters, managing lines, and sanitizing surfaces and voting equipment.

Mr. Hitt and Mr. Wikler said they were not concerned about a shortage of poll workers. Gov. Tony Evers, a Democrat, has promised to call out the Wisconsin National Guard to fill any vacancies, as was done during two previous elections this year.