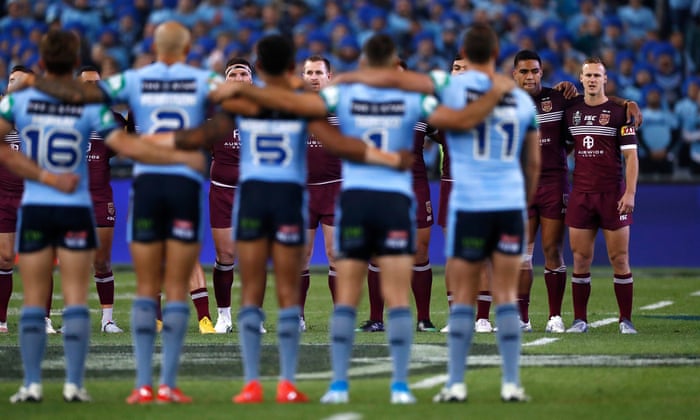 Australia’s ill-defined culture is built on compromises between notions of public good and the personal, political and financial ambitions of the rich and powerful.

In the gulf between these varying points of view – moreover in the shadows of the rich and powerful and lightyears away from the greater good – the blueprint for Australia’s status quo is found.

It was surprising that the NRL, a code that has been tarnished by incidents of sexual assault, domestic violence and drug abuse, was the first to make this moral arbitration and side with public good by omitting the national anthem from the upcoming State of Origin series.

The initial move suggested that over the last six months, the NRL has witnessed the destruction of the 46,000-year-old Juukan Caves and felt the loss of the 440-plus unnecessary deaths of Aboriginal people in police custody. It also pointed to an acknowledgement that Aboriginal people have the highest rates of incarceration and suicide on the planet, and are commercially locked out from freely using our own flag.

In line with previous statements and symbolic gestures, the NRL’s administrators momentarily refused to unsee all that they have seen and committed to doing what is right instead of what is easy.

This was before the heavy hands of the upper echelons – the same people who lambasted athletes for taking a knee in solidarity with the Black Lives Matter movement – weighed in.

Led by the highest political figure on the land, the same pundits and their sycophant media mouthpieces who previously screamed ‘politics should be left out of sports’ forcefully embodied everything that they had previously denounced.

Since the NRL’s initial announcement, the hypocritical cult of forgetfulness has joined forces as if the omission of the national anthem were a form of brutal oppression and pushed the NRL to quickly default back to the comfort of denialism.

Once again, the NRL has cold-heartedly ensured that the status quo of Australia’s ill-defined and frail culture remains.

The ARLC chairman, Peter V’landys, said the NRL’s initial decision to omit the anthem from the State of Origin series “was never about politics” but it now seems clear that – following a phone call with the prime minister – the reinstatement of the anthem is entirely political.

The commission’s backflip was also attributed to “the public response”, again reinforcing what Aboriginal people and much of the broader public already know – that Australia is perpetually racist and that power-holding institutions appear to take preference in catering to it; so-much so that racism reduces Aboriginal people’s life expectancy more than smoking does.

Scott Morrison, who has in recent times shown more passion for his beloved Cronulla Sharks than he has for public office, said in a statement that “it has never been more important to celebrate Australia and to be able to sing our national anthem at the game so many of us love”.

As Morrison eludes to, Advance Australia Fair continues to conveniently be romanticised with pride, passion and patriotism despite the song being first performed in 1878 when Aboriginal people, among many things, were being massacred, enslaved and dispossessed.

Objectively speaking, Advance Australia Fair is the anthem of terra nullius, genocide and denialism. Its origins are rooted in white power, not purity, solidarity or inclusivity as the prime minister pretends it is.

The song is a complete sham. “For we are young and free” erases the fact that this continent is home to the oldest continuous culture on the planet and absentmindedly ignores that the very same group of people are the most incarcerated in the world. The lyrics also omit that there are more Aboriginal children in out of home care than there were during the stolen generations and that First Nations people die much younger than our non-Indigenous counterparts.

“We’ve golden soil” that is being exploited by multinational mining companies at the expense of cultural heritage and supposedly “wealth for toil”, despite the festering gaps of inequality between the haves and the have-nots because of corporate greed and poor policy.

It also beggars belief that the prime minister, who has regressed Australia’s ranking to the worst of 57 countries on climate policy and is knowingly pushing the continent towards ecocide, will pretend everything is fine and bellow out that for a little bit longer “our home is girt (whatever that means) by sea” and that “our land abounds in nature’s gifts of beauty rich and rare”.

Although they momentarily tried, the unfortunate reality is that the satirical lunacy of this entire moment is on brand for the NRL.

In June, I wrote about sports’ uncanny ability to either anchor the status quo or shift the narrative. And I asked whether Australian sport can put morality before politics and implored athletes and sporting establishments to overcome the entrenched moral mediocrity.

Unfortunately the administrating institutions appear to be illuminatingly inept and politically compromised, highlighting the necessity for the most powerful stakeholders of them all, the players, to seize responsibility once for all.