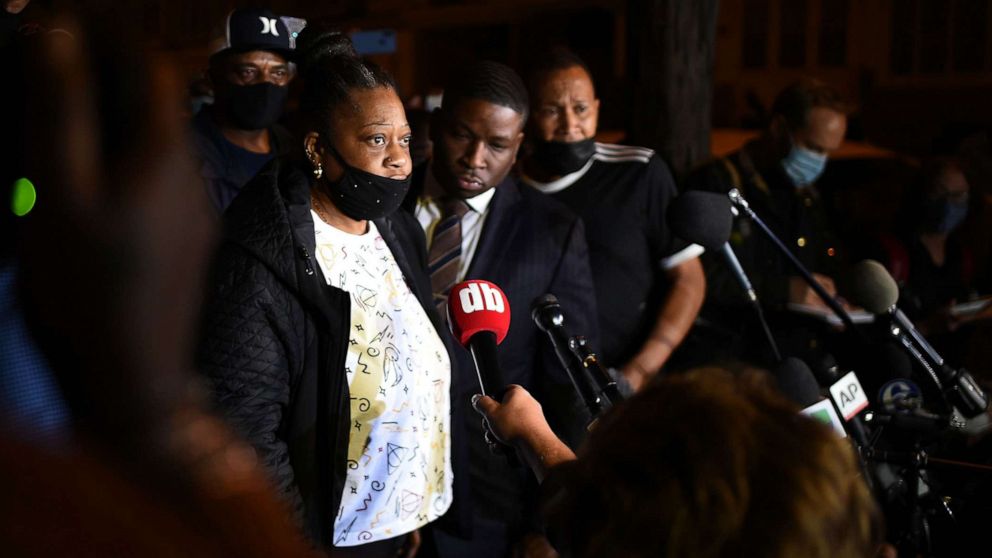 The mother of the 27-year-old Philadelphia man who was gunned down by officers Monday in front of his family’s home said police knew he was having a mental crisis because she told them and begged them not to shoot him.

The killing of Walter Wallace Jr. has sparked protests as well as rioting and looting in Philadelphia and beyond, and mirrors what experts say is an ongoing problem nationwide of law enforcement officers using deadly force on mentally ill people.

Wallace’s mother, Cathy Wallace, said police were called to her home three times on Monday but were not able to help her and her family deal with the mental-health emergency her son was experiencing. She said that when officers returned to her home the third time, they ended up shooting her son multiple times when he broke free of her and appeared to step toward two officers with a knife.

She said the first two times the police came to her home on Monday, they only irritated her son, the father of nine children, instead of helping him.

“They weren’t trying to help us, they didn’t give a damn about us,” Cathy Wallace alleged. “My son said, ‘Look at them, they standing there laughing at us.’ So I took my son and I and walked down the street and left the cops standing out there.”

The shooting erupted around 4 p.m. on Monday after Wallace’s brother called 911 and requested an ambulance and medical intervention for Wallace. The police showed up again, Cathy Wallace said, even though the family had only asked for an ambulance.

Regarding her son’s history of mental health issues, Cathy Wallace said “they already knew about it; it’s already on his record,” due to the dozens of times the police had been called to her home in the past.

Graphic cell phone video of the encounter showed Cathy Wallace trying desperately to separate her son, who was holding a knife, from the police, pleading with him to walk away as two officers drew their guns.

But Walter Wallace Jr. appeared to brush off his mother, circle around a parked car, and follow the officers as they backpedaled into the middle of the street while ordering him to put down the knife. When Wallace refused to comply and took several steps toward them, the officers unleashed a barrage of 14 shots, hitting him several times as his mother screamed.

“It was wrong, it was deadly wrong, but God is gonna serve and protect us,” Cathy Wallace said.

The family’s attorney, Shaka Johnson, said the episode is just the latest example of how police are ill-equipped to deal with mentally ill people.

“When you come to a scene where somebody is in a mental crisis [and] the only tool you have to deal with it is a gun, that’s a problem,” Johnson said. “I’ll tell you this as well, the police department should have a problem with that because they are setting their officers up for failure. If you ill-equip someone and ill-train someone, woe unto police officers.”

Johnson called the shooting “unjustified,” and said Wallace’s pregnant wife, Dominique Wallace, who is scheduled to have labor induced on Wednesday, told officers when they arrived at her family’s home for the third time on Monday that her husband had bipolar disorder.

“Officers who are properly trained should notice certain things when they arrive at a scene,” Johnson said. “Especially when his wife tells you, ‘Stand down officers, he’s manic bipolar.'”

Philadelphia Police Commissioner Danielle Outlaw said at a news conference on Tuesday that the two officers involved in the shooting did not have less-lethal tools, like stun guns, due to a department-wide lack of resources.

“We have to adapt our training,” said Outlaw, who was appointed Philadelphia’s police commissioner in February after serving as chief of the Portland, Oregon, Police Bureau.

In 2017, the U.S. Department of Justice recommended that all Philadelphia officers be issued stun guns to carry at all times. Outlaw said that while the department has equipped many officers with stun guns, it is still working to ensure all 6,300 officers have them.

She said they still need another 2,000 stun guns to equip the entire police force.

Outlaw said during a Zoom news conference on Wednesday afternoon that she has requested a review of the department’s training in handling mentally ill people and is exploring other models to address the problem.

“It’s a plethora of things; it’s not just how we respond to someone with a weapon, it’s how we respond to someone in crisis,” Outlaw said. “And that’s not just at the patrol level. We also need to look at what we’re dispatching, how we’re dispatching, the types of questions that we’re asking, what information is relayed to responding officers to help us determine response, and then shall we require a supervisor to be in route as well to assist with scene coordination?”

Outlaw also said she plans to release 911 calls and bodycamera footage of Monday’s shooting to the public in the near future. She said she hopes to arrange for Wallace’s family to review the footage within the next couple of days before it’s released.

A study published this year in The Journal of the American Academy of Psychiatry and the Law found that of the nearly 1,000 people shot by police officers in 2018, a quarter of them had a mental illness.

Some mental health experts warned in a report by ABC News earlier this year that sending officers to calls involving people who are experiencing severe suicidal thoughts or having a violent psychological episode can result in dire consequences.

Although officers are trained to handle tense situations, foiling a robbery or assault is not the same as someone who is in deep mental distress, Dr. Adwoa Akhu, a clinical psychologist and an adjunct professor at John Jay College of Criminal Justice, told ABC News in June.

“Police officers who are trained as paramilitary may not recognize a mental health crisis and treat it as something else,” Akhu said.

Outlaw declined to answer when asked how many times police had visited Wallace’s home on the day of the shooting or previously. She also did not answer questions about whether the officers who shot Wallace were aware of his mental health issues.

The commissioner said she was committing to a 48- to 72-hour timeline to announce if she would release the names of the officers and other pieces of evidence. The officers involved in the shooting have been placed on desk duty pending the outcome of the investigation.

“We not only remain dedicated to holding ourselves accountable but we are committed and dedicated to being a learning organization,” Outlaw said during a community meeting Tuesday night.

Cathy Wallace and her husband, Walter Wallace Sr., a retired Philadelphia city streets department employee, called for calm Tuesday evening after protests on Monday devolved into widespread looting, vandalism and violence that left 53 officers injured. At least 172 people were arrested Monday night and into Tuesday, most on charges of burglary and assaulting police, after officers had bricks, fireworks and other debris hurled at them, according to authorities.

“I don’t condone no violence,” the senior Wallace told reporters, asking people to “stop the chaos.”

Despite pleas from the parents, numerous businesses in Philadelphia were ransacked and looted Tuesday night, police said.

At least 81 people were arrested Tuesday night and into Wednesday, including eight charged with assault on police officers and 53 charged with burglary, city officials said on Wednesday afternoon. At least 23 officers suffered minor injuries on the second night of unrest, nine police vehicles were damaged, and nine ATM machines were blown up, officials said. They said there have been a total of 297 looting incidents and that more than 200 businesses have been damaged since Monday’s shooting.

Philadelphia Police Deputy Commissioner Melvin Singleton said at Wednesday afternoon’s news conference that some of the looting is being done by large groups of agitators and that they appear to coordinated, possibly through a mass group text.

“We know that we’re not seeing anything on social media about these pop-up locations. We believe they’re not using those platforms. We believe that they’re using their handheld cell phone devices and making decisions to join up at particular locations,” Singleton said.

Philadelphia Mayor Jim Kenney suggested that some of the looters and vandals are from out of town.

“Anecdotally, we’ve also gotten reports of a number of [cars with] New Jersey and New York plates in places that were hit that are close to bridges … to get into the city and out of the city quickly,” Kenney said.

At least 30 people were arrested Tuesday night in the Brooklyn borough of New York City when peaceful protests over Wallace’s killing gave way to rioting and looting of businesses, according to the New York City Police Department. Five officers were injured and nine NYPD vehicles were damaged, mostly with broken windows and graffiti, officials said.