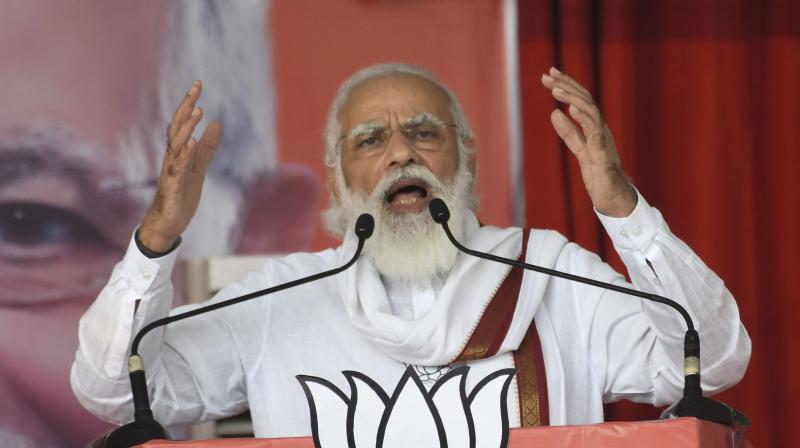 Patna/Darbhanga/Muzaffarpur: Prime Minister Narendra Modi on Wednesday tore into the Opposition RJD in Bihar, calling its chief ministerial candidate Tejashwi Yadav the “yuvraj” (crown prince) of “jungle raj” and targeting him over his party’s promise to provide 10 lakh government jobs if it came to power.

He warned people against the double whammy Bihar could face if those responsible for having turned the state “beemar” (sick) were voted to power amid the global Covid-19 pandemic.

Addressing back to back rallies in Darbhanga and Muzaffarpur in north Bihar, besides in Patna, the PM also set the tone for the day with a dash of Hindutva as he mentioned of Ayodhya at his first election meeting.

“Forget about government jobs. If they succeed (in winning), Bihar will lose jobs even in the private sector. The party has copyright over kidnappings and companies will be forced to shut shop and flee as they will be under duress because of extortion calls,” Mr Modi alleged.

Prime Minister Modi intensified his campaigning for the second and third phase of the Assembly elections while voting for the first phase got under way on Wednesday. He addressed rallies in Patna, Darbhanga and Muzaffarpur and urged people to vote for the NDA for the development of Bihar.

Listing a few key achievements of the NDA government, he reminded the people of the “jungle raj” during the 15-year rule of the RJD. He said the “NDA is focusing on infrastructure development, better facilities in villages which will also benefit people of Bihar. For this, the government has approved a special fund of Rs 1 lakh crore. I urge you to take decisions wisely as those who pushed Bihar towards jungle raj are looking for an opportunity to return”. In his public meetings, he also said 90 lakh Bihar women had benefited from the Centre’s Ujjawala scheme.

The PM reiterated that the Opposition coalition was being led by leaders who had no roadmap or experience to run the state. He added that the election in Bihar was being held as a coronavirus pandemic was raging and the state needed a stable government.

In an attack on Tejashwi Yadav, Mr Modi said that the “people do not have any expectations from the ‘yuvraj of jungle raj’. Everyone knows about his capabilities and track record”.

“They are the ones (Opposition) responsible for jungle raj and made money through projects which were allotted for the development of the state. They made job creation into (a) money-making industry for their development”, Mr Modi said during his rallies in Bihar. “He has been brought up on a value system where public money is looted to help one’s own family prosper. For such people, job creation becomes a tool to make crores of rupees.”

The PM also invoked the Ayodhya issue at his meetings in Darbhanga and Muzaffarpur. He said: “While standing in the land of Goddess Sita, I congratulate you as the construction work of a grand Ram temple at Ayodhya has started.” In a veiled attack on the Opposition, the PM said those who used to ask us about the date of Ram temple construction are now compelled to applaud.

The Prime Minister warmly praised chief minister Nitish Kumar for leading the state from misgovernance to good governance, from darkness to light, and from the phase where kidnappings had become an industry to the one full of opportunities.

Addressing Mr Kumar as the “vartamaan evam bhaavi mukhyamantri” (the present and future CM), Mr Modi said the progress made by Bihar in the past decade and a half has raised people’s aspirations and the state was poised to touch new milestones like becoming the next IT hub.

BJP leaders in Patna said besides Darbhanga, Muzaffarpur and Patna, the PM’s rallies were also broadcast live through at least 300 LED screens in other districts. He will address six more rallies in Bihar ahead of the second and third phases due to be held on November 3 and 7.

What you need to know about the 2020 election