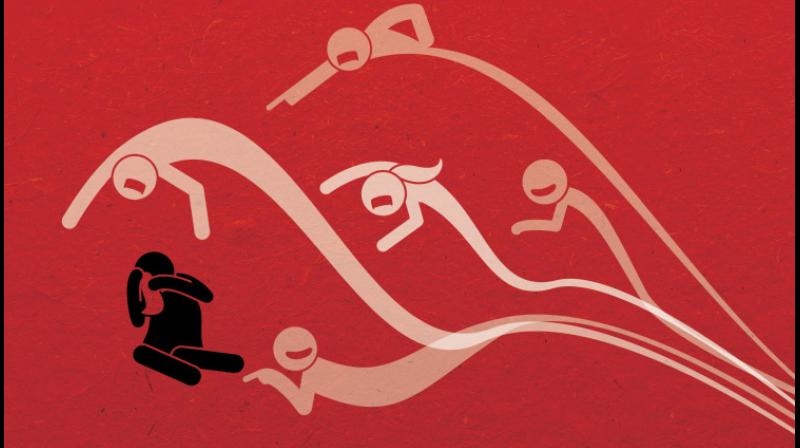 October is the National Bullying Prevention month, a campaign initiated by PACER’s centre, an over-30-year-old organisation in the US, established to make a difference in the lives of children with disabilities and their families. Bullying is the tendency of a tormentor to cause harm, intimidate or intend to harm an individual whom he/she considers weaker.

Unfortunately, despite eventually outgrowing childhood, some still retain their bullying tendencies well into adulthood, across professional and non-professional spheres. Trolls, frenemies and toxic acquaintances are all part of adulthood, with debilitating effects on one’s well-being.

Now with the World Wide Web inadvertently aiding in spreading negativity faster than wildfire, scores of adults, young and old, connected as they are to the external world through the digital domain, have reported being bullied/harassed online and off it.

Yashi Malviya, a 26-year-old entrepreneur, whose work revolves around building her profile digitally, sees social media as a huge part of his life as it offers the leeway to engage in different demographics and reach potential customers. “But it’s also a space where people can get really vile owing to the privilege on anonymity,” she says.

However, Yashi points out that while trolls can be a tormenting experience, they can be a good thing if you know how to deal with them. “Use criticism as an opportunity and respond to them by offering a solution to it. That makes you the mature one, and things will eventually work in your favour. Humour can also be used smartly to respond back to the troll. Bullying, on the other hand, can scar for life or it might compel you not to share your work online. I would suggest that one must confront the bully but keep calm while they are at it. But this should be the last resort as one must never give a bully/troll what they crave — attention. Often, when bullies fail to get the gratification they desire, they tend to simply lose interest and look elsewhere,” she adds.

While you can’t control what others say, you can control how you react. And that’s the key to resilience — your power. Dr Nalli Ramya, a medical professional and author, believes that it’s our choice to respond to how we feel.

“Practising positive reinforcements when we face criticism can change us for the better. Once you make a mental chart or boundary, trolls and criticism can actually spearhead you to your goals and keep you motivated than ever,” she adds.

Thinking along similar lines, entrepreneur Sagar Azad believes there’s a great deal of power in tweaking your perspective. “Whenever you venture out with something new, people often test you, and hurt you — largely out of fear and deep-seated insecurities. But tweak your perspective and you’ll get motivated to move forward and achieve your goals,” explains Sagar.

Working toward people-pleasing is futile, believes Dr Manisha Yadava. “I always remember one thing — I cannot please everyone. The important thing in the end was that my works were reaching the audience it was meant for and to an audience that cared about it and cherished it.”

On the other hand, Nitish Raj, an author, believes that braving the urge to react is the key. “Youngsters need to understand that whether it is a bully of their college or workplace, the bully’s only motive is to make them feel inferior. So it becomes essential that we bypass their inane comments and keep ourselves in high spirits at any cost. Our complacency towards their idiotic activities and words are the best weapon to tackle with them,” he states.

While you cannot always get even, remember that everyone gets their due, believes Atul Khekade, author of the book Me ki Gai, who is also a financier and an entrepreneur. “A few years ago, I was consulting for a very successful real-estate businessman. I was presenting in front of 15 senior members of their team. As I pointed out a few loopholes in their business practices, I started getting badly trolled and criticized for it, and was even told that my work ethics are fishy and wrong,” says Atul. “I’d be lying if I said it didn’t dampen my spirits.”

Narrating how the story ended, Atul tells us that he, however, always knew that healing begins when you let go and believe in a higher power. “A few years later, the man who had trolled me at the meeting was jailed for fraudulent practices in business. So no matter how bad people treat you, if you know from within that you are right, let it all go. Things will sort out by themselves,” adds Atul. “If you follow your heart, everything will start unfolding for you in your life, irrespective of bullying and criticism. Never lose your self-belief.”

Educators, elders have a role to play

IRS Officer, Neha V. Chakra-varthy believes that a lot has to do with parenting. “As positive behavioural tendencies are best developed when young, parents need to educate their children and warn them against misbehaving or hurting other children at school and around them. Education also needs to be more inclusive, so that teachers and mentors have a better understanding of different students. The more aware and proactive we are with our approaches in eradicating ‘mean behaviour’ the happier our generation will become!” he elucidates.

6 of the most endangered natural wonders in the world

Five of the best eco-friendly brands for winter coats