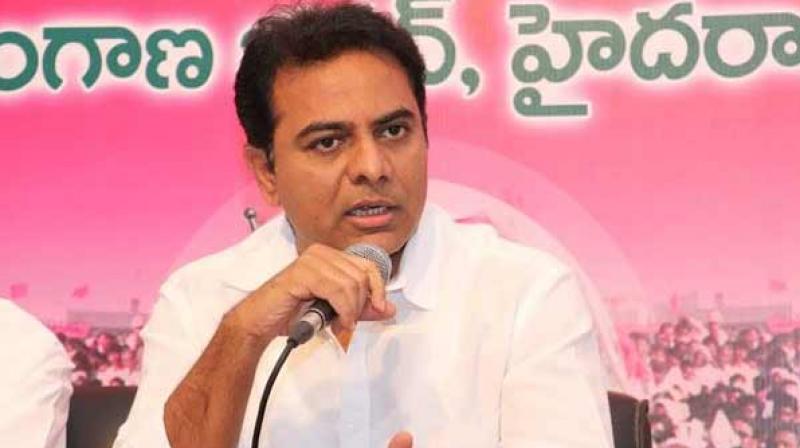 Hyderabad, Oct. 28 : TRS working president and IT and industries minister, K.T. Rama Rao, has accused the BJP at the centre of successfully bringing down the Indian economy from slowdown to lockdown mode.

Charging the BJP with the economic collapse, Rama Rao claimed that Telangana is emerging as a progressive state under the able leadership of Chief Minister K Chandrashekar Rao.

Praising his father, he said Telangana has become the only state to have waived crop loans amounting to Rs 27,718 crore, the largest waiver in the country since the formation of the state, he added.

Confident of the TRS winning in the Dubbaka byelection with a thumping majority and the BJP and Congress losing their deposits, Rama Rao said that the BJP’s failure in managing the economy has resulted in zero percent projected growth rate.

Much before the Covid-19 pandemic came into picture, the Indian economy saw the slowdown since the last eight quarters. “You have hit the growing economy of India with your inability and also let down the people of India,” said Rama Rao.

Ridiculing finance minister, Nirmala Seetharaman’s, statement on corona as an ‘act of God,’ Rama Rao said the BJP makes promises, mismanages and then shifts the blame onto others through their ‘WhatsApp’ university.

Asking where the two crore jobs promised by the Prime Minister, Narendra Modi, and the ₹15 lakhs to be deposited in each account and the assurance of houses to all by 2020, he took a side swipe the claims of Telangana BJP leaders of a huge contribution by the centre in various schemes implemented by the TRS government in the state. Rama Rao said “If Goebbels would have been alive, he would certainly learn from state BJP leaders how to mislead the people.”

Stating that the BJP leaders are seen more in social media than in society, Rama Rao challenged the BJP to release a white paper on the central government’s contribution to Telangana.

Taking serious exception to the BJP leaders’ allegation that police were caught while placing the cash in the Dubbaka BJP candidate’s relative’s residence, Rama Rao pointed said that the
“BJP believes in creating confusion when it cannot convince.”

Taking strong objection to the abusive language used by the BJP cadre against Rao, Rama Rao pointed out that they are also capable of using the same language and words against Modi or the union ministers, but “we respect institutions.”

Maintaining that despite the economic crisis with Covid-19 pandemic, the state government has ensured implementation of development and welfare programmes in the state, Rama Rao said the Reserve Bank of India (RBI) in its report clearly stated that the Telangana government had waived off the highest number of crop loans in the country. He said besides the crop loan waiver, the state government spent another Rs 28,000 crore under Rythu Bandhu benefiting farmers directly in the last six years.

The RBI has given a befitting reply with its report to the opposition parties which have been accusing the state government on loan waiver implementation for political mileage.

“The RBI report also stated that about 95 per cent of the beneficiaries of the crop loan waiver scheme were marginal and small farmers. Despite being the youngest state, Telangana has been progressive and has emerged as a frontrunner among top performing states in the country,” waxed Rama Rao.

Despite the Covid-19 pandemic, the state government had released Rs 7200 crore for Rythu Bandhu, Rs 1,142 crore for Rythu Bima and another Rs 14,000 crore towards loan waiver, among other schemes. A whopping total of Rs 56,000 crore was disbursed into the accounts of beneficiaries.