If Dracula decided to emigrate from his native Transylvania to England, then surely I would have chosen for yourself as a residence the Abbey of Whitby. The lovers of mysticism believe that the ruins of this ancient monastery are the most horrible place in the UK. Anyone who visits here will surely agree with this. 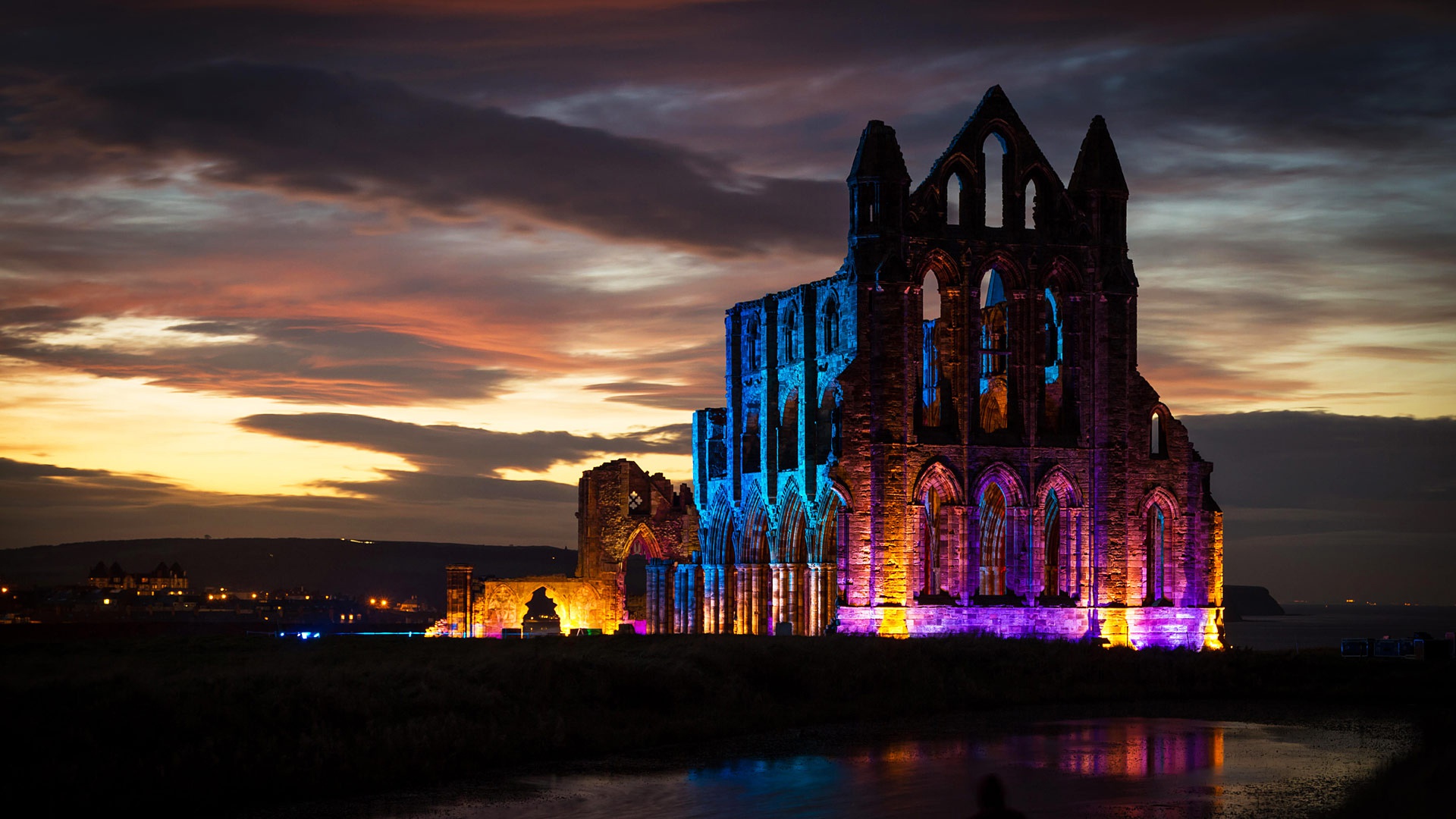 Whitby Abbey is located in the neighborhood of the same city, in the County of Yorkshire. The monastery was built in the VII century, more precisely in the year 657, as a monastery for monks of both sexes. Later, when monasteries began to be divided into male and female, Whitby became a man’s abode. 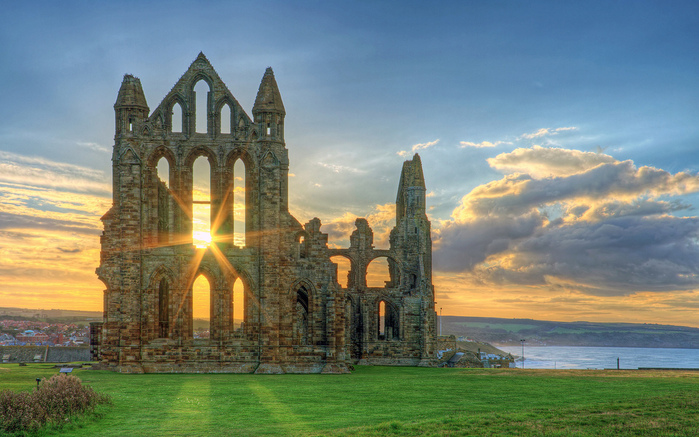 First abbess of the monastery was abbess Hilda, who later was canonized. In this woman’s veins flowed the Royal blood of the rulers of Northumbria and East Anglia, but she chose a different path, leading a remote monastery on the banks of the North sea. 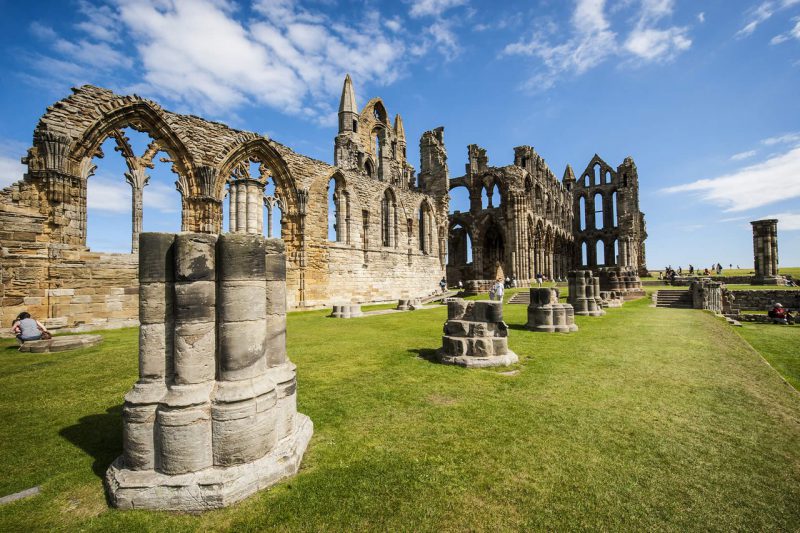 Day Abbey ruins not terrified, although one to stay here I still do not want

In North Yorkshire with Hilda involves a lot of different traditions. One of them says that a nun was rescued by local residents from the invasion of poisonous snakes, turning them to stone. In proof of this the show tour of the fossil spiral shape, which is actually vaguely reminiscent of a coiled reptile.

These stones are nothing more than shells of ancient mollusks, but here they are for many centuries known as the “stone snakes Hilda”. 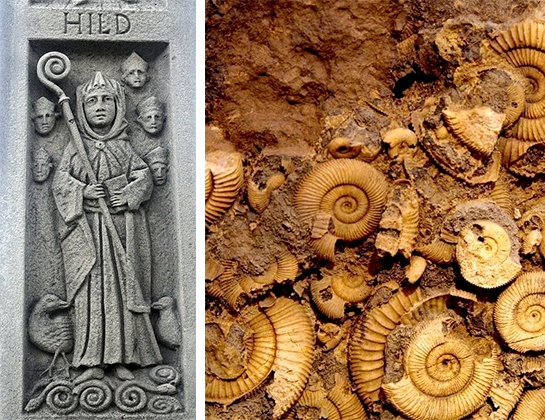 The secret of the stone serpent, which represent the feet of the Saint Hilda’s, today will solve any student

The monastery flourished for two centuries, but in 867 it was looted and destroyed by the Vikings. Scandinavian guests do not stand on ceremony with Christians and filled the courtyards and corridors of the Abbey’s monks blood. After that, the monastery two centuries stood in the ruins, until he noticed one of the companions of king William the Conqueror named Reinfrid. Knight fully restored buildings of the Abbey and has even expanded them. In the middle of the XI century under the arches of the Cathedral of Whitby began again held service, and in the cells settled, the monks and novices. 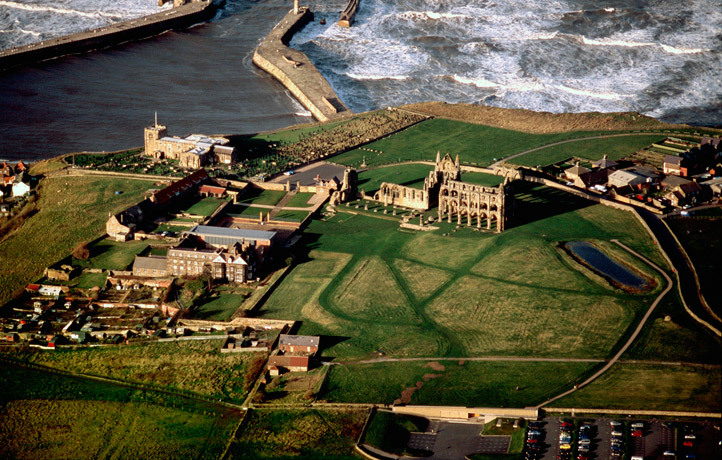 Ancient Abbey, Ufsbi is not on the outskirts as you would think, looking at a photo

Until the XVI century Whitby Abbey didn’t major upheavals and life went on as usual. The monks worked in the fields and herded cattle, fished in the North sea, the fish, and then found rest in the churchyard, the walls of the monastery. Idyll was broken by king Henry VIII, came into a tough confrontation with the Pope. The head of the Catholic Church denied him a divorce from Catherine of Aragon than mortally offended the proud monarch. 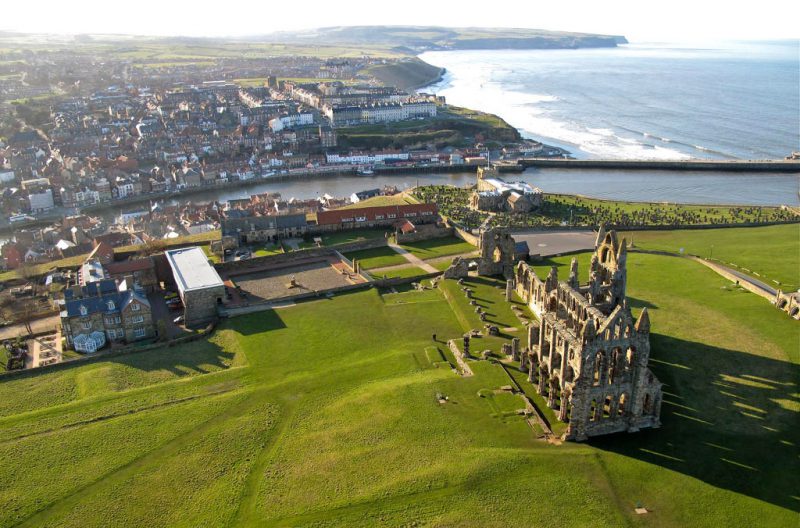 If you are a romantic, then this place will surely leave your heart with an indelible mark

Not being able openly to resist the Pontiff who at that time in Europe had a huge influence, Henry VIII started out on Catholic monasteries, closing them and giving them substantial land holdings. Trouble came in Whitby — the Royal soldiers dispersed the monks and the land of the monastery Henry was divided among the faithful vassals. 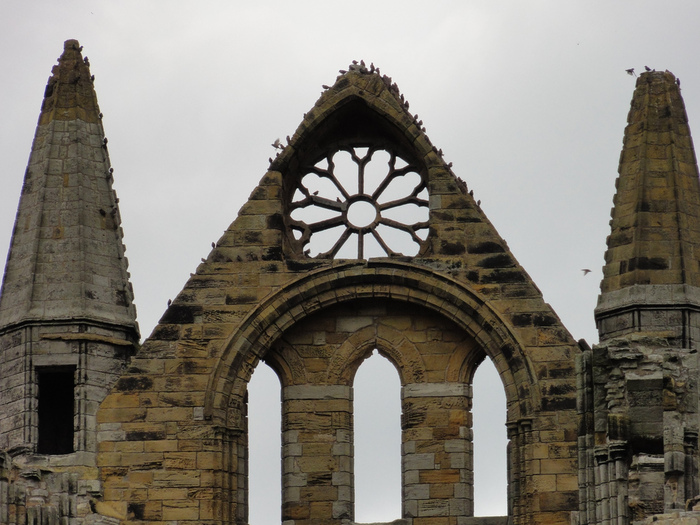 Even lying in ruins, the Abbey is striking in its architectural thoroughness

Since then and until today, for 5 centuries, Whitby Abbey stands in ruins. At first the local peasants went to the monastery in search of booty and took the stones for building. The spacious galleries and the courtyards of the monastery often travelers stayed, not getting too cozy, but free overnight. But then they began to talk, in the Windows of the monastery began to appear the figure of an elderly women in ancient robes. 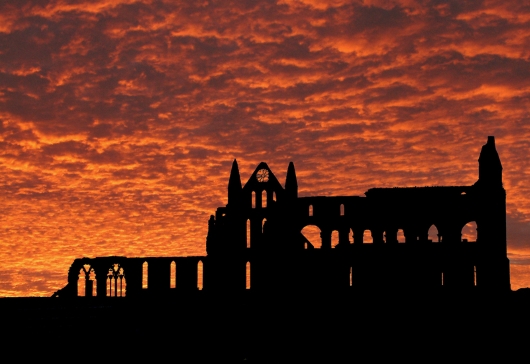 The Ghost was seen many and most of the witnesses were sure that the spirit of Hilda, who had lost the rest, seeing the decline of the Abbey and the contempt of the laity. Finally the local gone hunting naughty in the monastery, after the bell tower of the Abbey at night began to be heard faint but measured strokes of a bell. Perhaps it was a game of wind or someone’s joke, but after that, about Whitby Abbey, the infamous. 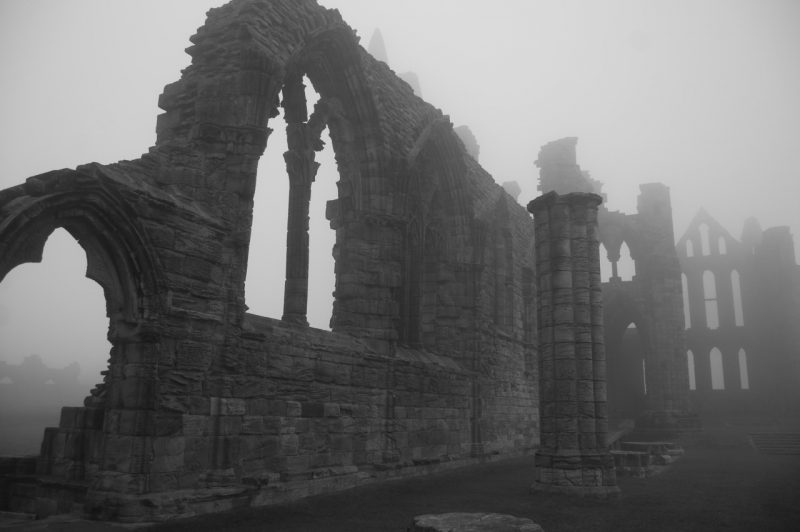 The monastery is mentioned all the greedy, lustful abbots, and the terrible bloodshed in the IX century and the cases of diseases and strange deaths in the area. Out of nowhere appeared and not too decent story about the first owner of the monastery. Some said that the woman was not so sacred and old age has broken the vow of celibacy, for which she was bricked up alive in one of the walls of the Abbey. The final touch was a strange story of a bell that was once stolen by some rock remove children, sailed to the Abbey by sea. 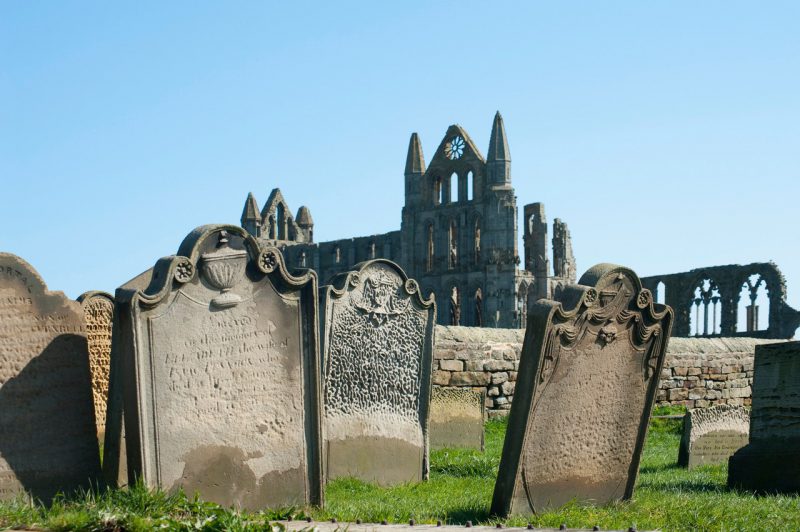 The bell, which was the cause of chilling fear, superstitious peasants, simply removed from the tower and dragged dragged to the ship. But to take away the last relic of the monastery far from going out to sea, the ship ran aground and then was defeated in chips to the sudden storm. The bell disappeared in the depths of the North sea, but not stopped. Fishermen say that during a particularly strong storm it alarm alarm audible under water. 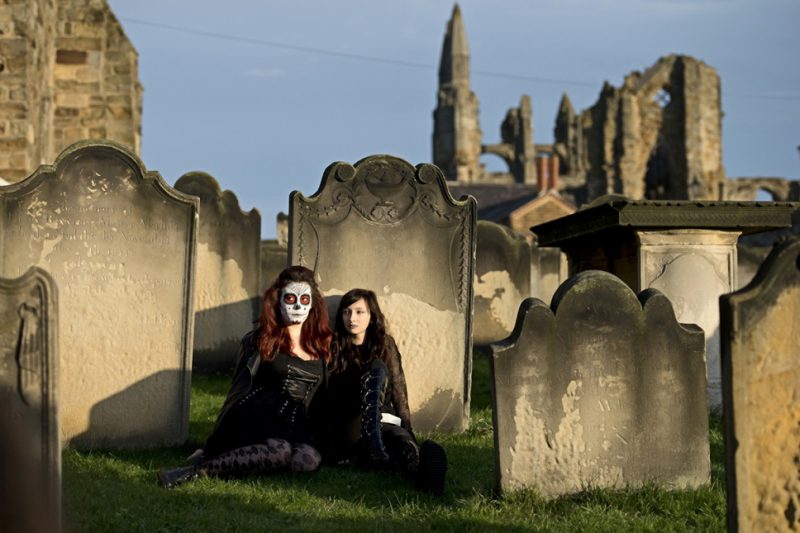 In 2014, the Whitby Abbey, a festival ready. And where else but here?

Sometimes the bell rings and in calm weather, it is a good sign, but if this day in the city or fishing village wedding, the newlyweds are predicting a long and happy life together.

The abbess Hilda also never leaves the ruins of his monastery. Even in the early twentieth century sailors, passing by the coast, peering into the dark gaps of Windows of the Abbey, hoping to see a Saint with a lantern. Many believed that in time of danger the Ghost of Hilda may submit fire alarm and help mariners avoid dangerous shoals and rocks. 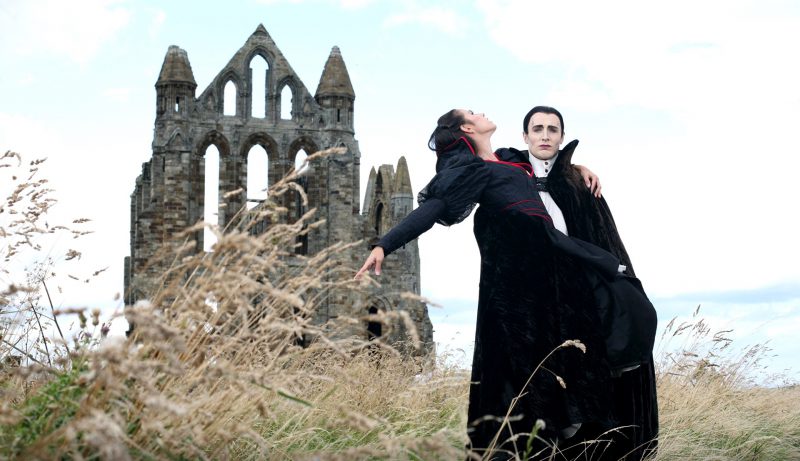 It’s hard to say how it was with the Stocker, but today the vampires around the Abbey wandering packs

In the XIX and XX century Whitby Abbey became a place of pilgrimage for poets, mystics and romantics. Seen here the famous author of “Dracula” by Bram Stoker. The writer often visited this place and always admiringly spoke of the cemetery of the monastery, imbued with the mystical spirit.

Researchers of creativity of the writer claim that this place is so impressed with Stoker that he described it in one of the chapters of the novel as a place where a vampire turns into a dog. The churchyard of the Abbey really worthy of attention — it has been preserved very well and among his mossy slabs you can see the tombs of the VIII-IX century. 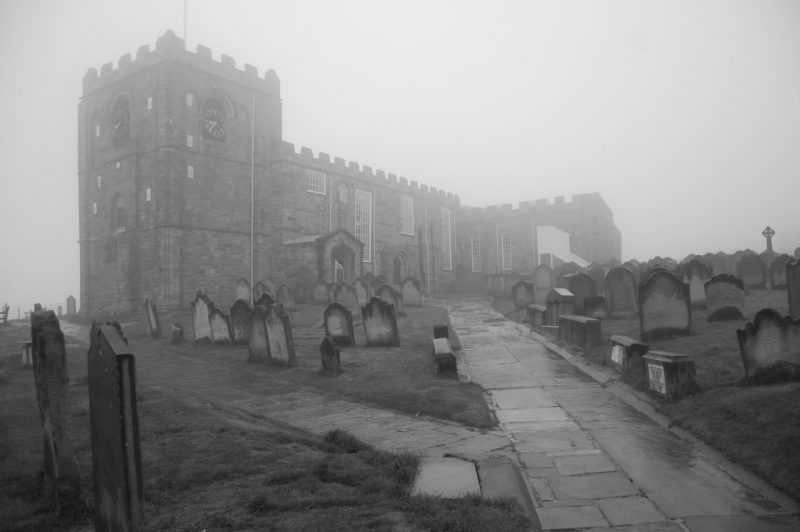 Today Whitby Abbey, which left only a few walls, attracts tourists, historians and, of course, informal youth. But to abuse the hospitality of the Prelate’s Ghost solved a few — known that a long walk among the ruins sometimes end up feeling heavy evil look and inexplicable panic. Even during the day among the jewels of the monastery alone to the guest at ease, and to visit the ruins of the night dare only the most risky.