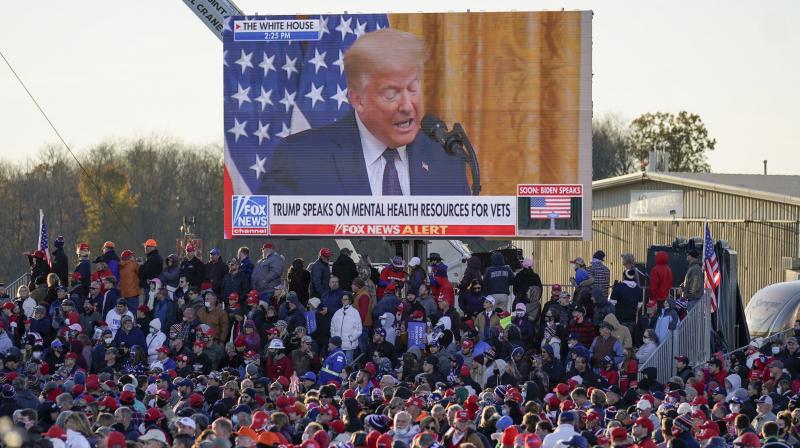 New York: About 18 election rallies by Donald Trump are estimated to have led to more than 30,000 confirmed cases of coronavirus and likely claimed over 700 lives, a new study by Stanford University researchers said, stressing that the communities where the US President's rallies took place "paid a high price in terms of disease and death."

In the study titled 'The Effects of Large Group Meetings on the Spread of COVID-19: The Case of Trump Rallies', researchers concluded 18 rallies by Trump held between June 20 and September 22 "ultimately resulted in more than 30,000 incremental confirmed cases of COVID-19" and "likely led to more than 700 deaths", which may not necessarily have been among attendees.

"Our analysis strongly supports the warnings and recommendations of public health officials concerning the risk of COVID-19 transmission at large group gatherings, particularly when the degree of compliance with guidelines concerning the use of masks and social distancing is low. The communities in which Trump rallies took place paid a high price in terms of disease and death," the researchers said.

Reacting to a Twitter post on the study, Democratic Presidential nominee Joe Biden said "President Trump doesn't care about you. He doesn't even care about his own supporters."

The study, released on Friday, noted that more than 8.7 million Americans have contracted COVID-19, resulting in more than 225,000 deaths.

The Centers for Disease Control and Prevention (CDC) has advised that large in-person events, particularly in settings where participants do not wear masks or practice social distancing, pose a substantial risk of further contagion.

"There is reason to fear that such gatherings can serve as 'superspreader events', severely undermining efforts to control the pandemic," it said.

Researchers said the purpose of the study was to shed light on these issues by studying the impact of election rallies held by Trump's campaign between June 20 and September 30.

The researchers said Trump rallies have several "distinguishing features" that lent themselves to this inquiry, adding that attendees at Trump rallies numbered in the thousands and sometimes in tens of thousands.

They noted that the rallies were not geographically ubiquitous and the degree of compliance with guidelines concerning the use of masks and social distancing was low in part because the Trump campaign downplayed the risk of infection.

This feature heightens the risk that a rally could become a 'superspreader event.'

The researchers said that to capture the effects of subsequent contagion within the pertinent communities, their analysis encompasses up to 10 post-rally weeks for each event.

"Our method is based on a collection of regression models, one for each event, that capture the relationships between post-event outcomes and pre-event characteristics, including demographics and the trajectory of COVID-19 cases, in similar counties," it said.

Why Black Americans say both parties are failing them (audio)

Is Trump the candidate of peace?

Year of extremes in politics? Not in Michigan Senate race.