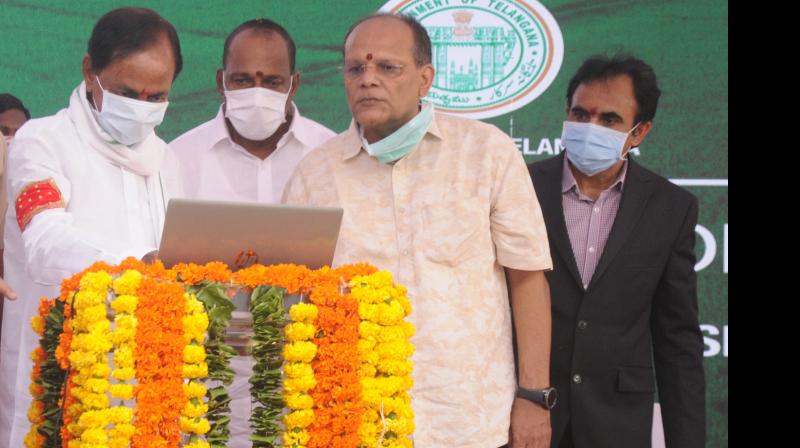 HYDERABAD: Chief Minister K. Chandrashekar Rao on Thursday said that the one-stop portal Dharani, which was designed to provide transparent and hassle-free land transactions, will emerge as a trend-setter in the country. With the launch of the portal, the way is cleared for registration and mutation of agriculture lands across the state, which was stalled for enacting the New Revenue Act about a month ago.

Chandrashekar Rao launched the portal at the tahsildar office in Mudu Chintalapalli village of Medchal-Malkajgiri district.
Addressing the gathering, he said that farmers can complete their land transactions including sale, transfer and mutation, without making the rounds of various offices. The process can be completed at one stroke.

Rao announced that stamp duty will be collected based on the existing land value and there will not be any increase in the land value, as of now. Apart from stamp duty, the farmers have to pay a minimum fee for the mutation.

“The process should not take more than 20 minutes and there would be no human interference and no discretion power at any level,” he added. He appealed to the people to make use of the opportunity to register sada binama (white paper agreements) transactions.

He said so far, the state has received 1. 64 lakh applications and since it is the last opportunity, the government is extending the last date by one week from Thursday.

Maintaining that the Dharani portal was an important step towards resolving issues pertaining to lands, he said that a lot of effort went into designing the portal.
He said “I and my officers have been working on this for the past three years. I have held more than 100 meetings to provide a fool-proof mechanism. I also convinced the revenue employees to abolish the village revenue ifficers system in view of the bad name to the department because of certain mischievousness in the system. They also agreed and Dharani became a reality.”

The Chief Minister said details pertaining to 1,45,48, 000 acres had been uploaded on the portal and people across the globe can check the details with just a click of the mouse. The revenue portal will impact the country since both the Centre and other state governments would be under pressure to introduce similar measures.

He said “it is obvious that every new system will have teething problems and we have to overcome them Sometimes systems may not work due to technical errors and often the portal will take some time to open.”
Asking people not to panic because of small errors, he said that during the trial run the portal had jammed several times in the last three to four days due to heavy traffic as thousands of people from all over were accessing Dharani to understand its features and uniqueness.

He said that with Dharani around 60 lakh farmers will be able to complete easy registration and mutation. Listing out the efforts undertaken by the state government in the past six years, Rao said Telangana state had achieved tremendous progress in all sectors, and the Dharani portal was an important step towards resolving issues pertaining to land.

Rao said he always disagreed with people who described Telangana state as a backward region. He said “no, it is not a backward region. It has the potential to lead the country on all fronts and we have been proving this quite abundantly and across sectors.”
He said that the per capita income in the state had more than doubled from
Rs 63,000 in 2011-12 to Rs 2.28 lakh now, which is a clear indication of its progress and prosperity.