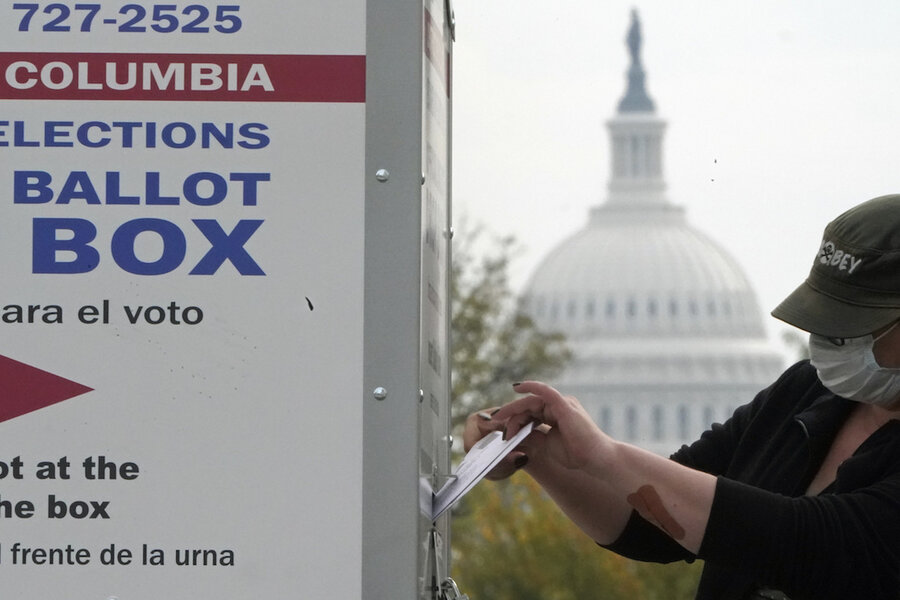 In the most litigious presidential election in memory, court fights are even happening over where poll watchers may stand as the votes are tallied.

Lawsuits by the hundreds already have been filed – with the prospect of many more before and after Tuesday’s voting – as both Democrats and Republicans try to settle in court a process that is usually determined by citizens simply casting ballots.

The legal action runs along a broad spectrum, from a dispute over whether guns are allowed near polling places to more complicated matters that already have reached the Supreme Court.

“The level of litigation has just been so unprecedented,” said Sophia Lin Lakin, deputy director of the American Civil Liberties Union’s Voting Rights Project. “It does feel like there’s a desire to elevate any possible thing. Possible misunderstandings or just disagreements with what the rules are is somehow ending up in court. It feels very different.”

Roughly 300 lawsuits have been filed over the election in dozens of states across the country, and still scores remain unsettled just days before Election Day. Many involve changes to normal procedures given the coronavirus pandemic, which has killed more than 227,000 people in the United States and sickened more than 8.8 million.

The campaigns of President Donald Trump and his Democratic rival, Joe Biden, have been quietly building armies of lawyers preparing for the possibility of a drawn-out legal fight that lands at the Supreme Court.

The latest focus for Republicans in some places is on poll watchers, who are volunteers for candidates or political parties long used in elections. They monitor voting places and local election offices and make note of potential problems as a way to challenge the voting or tabulating process.

The role of poll watchers or challengers has gained increased attention this year as Mr. Trump has pushed unfounded claims about the potential for voter fraud because of an increase in mailed-in ballots. Mr. Trump has been urging his supporters to go to the polls and “watch very carefully,” raising concerns about possible voter intimidation. He has also falsely stated that poll watchers were “thrown out” of a polling site in Philadelphia, where he has claimed without evidence that “bad things” are happening.

In Nevada, Mr. Trump’s campaign and state Republicans went to court to try to stop the counting of Las Vegas-area mail-in ballots. Republicans say observers aren’t allowed close enough to workers and machines at the busy vote-counting center in suburban Las Vegas to challenge signatures in the state’s biggest and most Democratic-leaning county.

Jesse Binnall, an attorney for the Republican Party and Trump campaign, told a judge Wednesday that the counting process observed in Las Vegas prevents what he called a “meaningful opportunity” to challenge the validity of mailed ballots.

Nevada Democrats have called the lawsuit a “plain and simple” effort to suppress votes in the state’s most diverse county.

“Clark County is a blue county,” Gregory Zunino, deputy Nevada state solicitor general, told the judge. “They quite frankly would like to exclude as many ballots or signatures in Clark County as they can.”

Nevada Republicans and the Trump campaign filed another lawsuit this week demanding the county’s registrar turn over names of Democrats, Republicans, and nonpartisan ballot workers, election monitors, and poll watchers along with details about their work instructions and shifts.

In Michigan, a candidate for the state House of Representatives sued this week, alleging coronavirus social distancing rules are preventing poll watchers from properly overseeing the election process. The lawsuit was quickly resolved with an agreement that poll watchers can look at election books and approach poll workers when necessary.

Meanwhile, New Mexico’s highest court this week rejected a lawsuit brought by the state Republican Party alleging partisan poll challengers have been unfairly denied oversight of the initial ballot verification process. The lawsuit from Republicans including several state legislators and county clerks alleged partisan challengers are being shut out of the initial verification process unnecessarily, based on privacy regulations.

In Philadelphia, Mr. Trump’s campaign filed a lawsuit this month demanding its campaign representatives be allowed to monitor people registering to vote or filling out mail-in ballots in election offices in the battleground state. A judge ruled Pennsylvania law doesn’t allow such representatives to observe in election offices, and that decision was upheld by an appeals court.

Other lawsuits across the country involve when to stop counting mail-in ballots if received after Tuesday, bans on curbside voting in the pandemic, issues over drop boxes for voters, and enforcing strict witness requirements.

A judge recently overturned a ban in Michigan that prevented open-carry guns at the polls. And new lawsuits keep cropping up: A man in Maryland has sued the board of elections in Harford County following his arrest last week as he tried to vote without a face mask.

Pennsylvania officials have ordered ballots received after Tuesday to be segregated after a challenge pending before the Supreme Court on whether ballots can be counted after Election Day. The court on Wednesday turned away Republicans’ plea to cut the deadline for receipt of absentee ballots in North Carolina, which means they can be received up until Nov. 12.

The lawsuits are adding to the confusion and uncertainty around the vote. And experts say legal challenges claiming the process was flawed will undoubtedly keep streaming in in the days after the election. But to have any chance of success, they’ll have to show evidence of real legal violations.

“You know you’re going to see those lawsuits in part because the president has been saying that the election has been fundamentally unfair since the last election,” said Loyola Law School professor Justin Levitt, a former Justice Department elections official. But “the fact that you could file a lawsuit saying the election was fundamentally unfair because ‘fraud, maybe?!’ is not a thing that the courts will pay any attention to.”