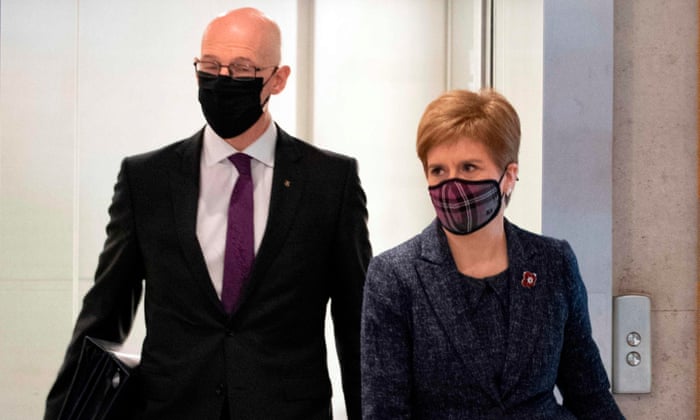 The Welsh and Scottish governments have hit back at the “unfair” extension of the furlough scheme during England’s second lockdown, weeks after the devolved nations called for the measure to support their own tightened restrictions.

Speaking on the BBC’s Sunday Politics Scotland, the Scottish deputy first minister, John Swinney, said that the UK government had disregarded the issues faced in Scotland, Wales and Northern Ireland when the devolved nations asked for a similar extension several weeks ago.

Echoing the Scottish government’s criticisms, the Welsh first minister, Mark Drakeford, said that extending furlough midway through his country’s “firebreak” measures was “not fair at all”. Drakeford told BBC Radio Cymru that the UK chancellor, Rishi Sunak, had rejected his requests to boost subsidies for wages when Wales went back into lockdown.

“I got an answer quickly to say that was not possible for a number of technical reasons and so, no. Now when things change in England, they change their minds about the furlough plan. And that’s not fair.”

The latest criticisms reflect ongoing tensions between Westminster and the devolved nations, with Welsh and Scottish first ministers earlier this autumn accusing Boris Johnson of failing to speak to them directly about the possibility of a new national lockdown in England.

Responding to the announcement on Saturday evening, Scotland’s first minister, Nicola Sturgeon, said: “A crucial point for us is whether support on the scale announced for English businesses is available for Scottish businesses now, or if we needed to impose further restrictions later – or if it is only available if Scotland has a full lockdown at the same time as a lockdown in England,” she said.

The Treasury confirmed that the furlough scheme extension was UK-wide, but that business grant policy is fully devolved, and devolved administrations will therefore receive Barnett consequentials (the method for allocating spending to the devolved nations) which they could use to establish similar schemes.

Sturgeon went on to ask people not to travel to England, or from England into Scotland unless absolutely essential.

Speaking on the BBC’s The Andrew Marr Show, the Labour leader, Keir Starmer, said that he would have preferred to see a four-nations approach to a second lockdown.

While Boris Johnson has faced heavy criticism for his delay in introducing a second lockdown, Scotland, Wales and Northern Ireland have tightened their own restrictions in recent weeks.

Wales introduced a two-week firebreak – under which schools, shops, pubs and hotels closed and citizens were told to stay at home – from 23 October, to last until 9 November.

Two weeks earlier, Scotland introduced a similar two-week “circuit breaker” coinciding with the school half-term. Sturgeon announced a nationwide ban on drinking indoors in pubs, bars and restaurants across Scotland, and a full shutdown of all licensed premises across the central belt, where infection rates are accelerating most rapidly. Schools and early-years childcare remain open and a new five-level system of Covid controls comes into force on Monday.

In Northern Ireland, pubs and restaurants were closed for four weeks starting on 16 October with the exception of takeaways and deliveries. Schools were closed for two weeksfrom 19 October.

Speaking to BBC Scotland, Swinney said that while he could not categorically rule out a national lockdown in the future, the Scottish government had confidence in its own level system, which will see the majority of Scots living under level 3, which bans indoor socialising and drinking in pubs and restaurants along with travel between local authorities.