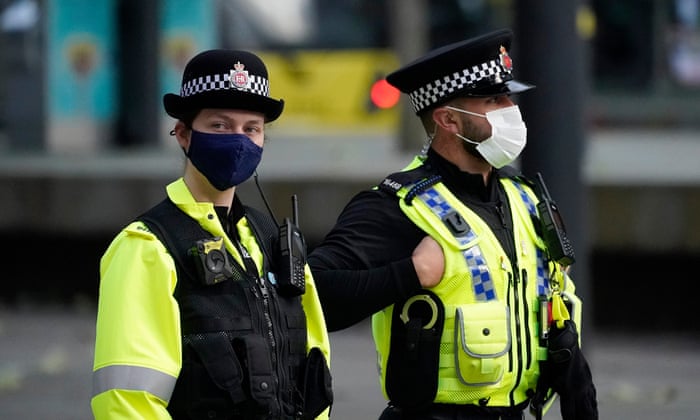 Police broke up a string of raves across England over the weekend, including one involving 1,000 people, raising fears that there may be numerous breaches of the country’s Covid-19 laws in the days before the second national lockdown begins.

The decision to impose the new restrictions has also led police leaders to voice concern that officers already under strain face enforcing the new lockdown on a weary public.

They also anticipate more officers may be absent with Covid than during the first national shutdown.

The Metropolitan police said it had broken up a rave in east London attended by 1,000 people. The force said seven people had been arrested under the coronavirus regulations for holding or being involved in the staging of the unlicensed event, and that they may face £10,000 fines.

The Met, which covers London, said it had dealt with 11 unlicensed music events and illegal large-scale gatherings on Saturday, including a christening in Tottenham, north London.

Commander Ade Adelekan said: “If you think the next few days are an excuse to break the rules, think again. You will get caught, we will take action and impose the maximum sanctions.

“As well as music events there were numerous gatherings which flout the rule of six. We are still in a pandemic and it is extremely selfish of the small minority of people to carry on without regard for the regulations.”

About 500 gathered for a rave at a warehouse in Yate near Bristol, where police said some of the crowd became violent when ordered to disperse and arrests were made. Some people were still present on Sunday afternoon.

Another 300 attended a rave at a farm in Wigan, and police turned more away. Police said the tyres on seven of their vehicles had been slashed and that a 26-year-old man was arrested on suspicion of not providing personal details for a fixed penalty notice under Covid laws. A 36-year-old was arrested for alleged possession of class A drugs.

Assistant chief constable Rob Potts of Greater Manchester police said: “A comprehensive investigation has been launched to bring the organisers to justice. Where there are blatant breaches there will be robust enforcement.”

During the last lockdown young people were most likely to come into conflict with police enforcing the coronavirus regulations.

One senior police source said it was not just the public but also officers who were weary after months of changing restrictions, particularly in areas with higher infection rates.

The source said they had been working hard to enforce regulations to contain the virus: “This comes in addition to the day-to-day stuff and is difficult. Officers have been working longer hours through overtime, with less days off.”

A return to national restrictions should be simpler to police than a patchwork of local and regional rules, but police chiefs are bracing themselves for potentially higher absences than during the first lockdown. The greater availability of testing may mean more officers have to stay at home than during the first lockdown, when absence rates were far lower than feared.

John Apter, the chair of the Police Federation, said: “Policing is already under enough pressure. My colleagues have been doing their best to police restrictions which have changed on a regular basis and have often been confusing.

“It is clear that the virus has not gone away and is spreading at an alarming rate. We must be clear in what we are asking of the public and what we are expecting of the police. The information from government must be clear and unambiguous. Anything less makes the policing of this pandemic even more challenging than it is already.”

‘Not fair’: Welsh and Scottish leaders hit out at furlough extension for England lockdown