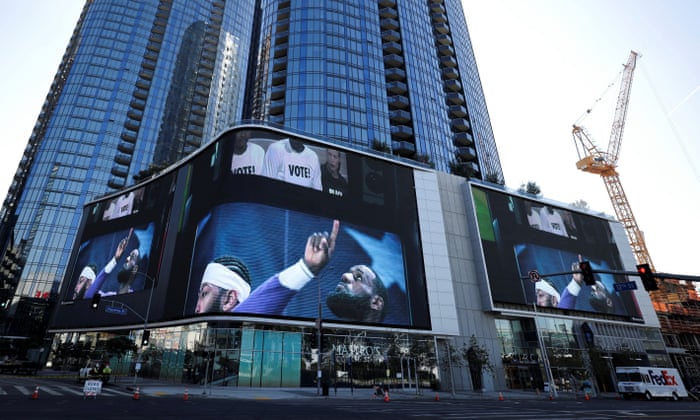 They put in the long hours, did all the heavy lifting, prepared like never before – and all in anticipation for the biggest contest of the year: The one on 3 November.

That day, election day, is now less than a week away. Already, votes have been cast by a record 66 million-plus Americans, an astonishing draw that once seemed unfathomable during a pandemic. And while much of that sense of urgency stems from the 2020 presidential race – truly a life or death vote, in light of the ravages of Covid – the sense of purpose was shaped in no small part by the activism in sports. “Because of everything that’s going on, people are finally starting to listen to us,” LeBron James told the New York Times in June. “We feel like we’re finally getting a foot in the door.”

The big push started in March, with people the world over breaking quarantine to protest systemic anti-black racism in the wake of George Floyd’s unlawful killing in May at the hands of Minneapolis police. Meanwhile, scores of idle dribblers wondered if an on-court comeback might steal focus. In the end they did return but with assurances that social justice would become more centered in the overall spectacle. Hence how Black Lives Matter landed on NBA and WNBA courts and jerseys, and voter registration became the focus of recurring league PSAs. And when protests erupted again after Kenosha police shot Jacob Blake within an inch of his life three months later and the Milwaukee Bucks walked off of a play-off game and triggered a two-day sports blackout, one of the biggest concessions they won from their NBA partners was a pledge to convert some 20-odd league arenas into polling places in response to Donald Trump’s attempts to suppress and undermine in-person and mail-in balloting.

Last Saturday, on the first ever day of early voting in New York state, thousands of masked Manhattanites wrapped the streets and avenues around Madison Square Garden, with some waiting as long as five hours to cast their ballots. The scene was similar, if a bit more brisk, at the Golden 1 Center in Sacramento and at the Spectrum Center in Charlotte. That a team owned by someone as famously apolitical as Michael Jordan could have a hand in this historic election turnout is a welcome twist.

The kicker: he’s also written $2.5m-worth of checks to fight black voter suppression as part of a 10-year, $100m pledge to beat systemic racism – the clearest indicator yet of his evolution away from the neutral pitchman who hawked so many sneakers and colors of Gatorade in the ‘90s. “We understand that one of the main ways we can change systemic racism is at the polls,” he said in a July statement. “We know it will take time for us to create the change we want to see, but we are working quickly to take action for the Black Community’s voice to be heard.”

Still, you wonder if Jordan would’ve ever had such courage in his newfound convictions if James wasn’t giving as good as he gets from his critic-in-chief in the Oval Office in between weighing in on social justice issues in real time. As he was leading the Lakers to an NBA championship, he was huddling with a group of prominent athletes and entertainers to launch More Than a Vote, an organization aimed at informing, protecting and turning out Black voters.

When it comes to more acute impact, however, James and co have nothing on his female counterparts. When one of its owners, Kelly Loeffler, the junior Republican US senator from Georgia who owns half of the WNBA’s Atlanta Dream, took to the airwaves this past summer to disparage Black Lives Matter and the league for dedicating its season to the movement, players from her team and the opposing Phoenix Mercury took to the court before a nationally televised game in black T-shirts endorsing her Democratic opponent Raphael Warnock, leader of the Atlanta Baptist church where Martin Luther King once pastored.

The shirts quickly came into vogue league-wide. Within two days, Warnock’s campaign announced a $183,000 fundraising windfall – which helped launch a TV ad onslaught. In the last month Warnock has gone from polling slightly ahead of Loeffler at 31% to above 50% – which is right where he would have to be to avoid a January runoff. “It was one of many turning points in the campaign,” Warnock told USA Today Sports of the WNBA players’ endorsement. Nneka Ogwumike, the Los Angeles Sparks MVP forward and Player Association president, called it something else: “My favorite moment of the summer.”

That a group of athletes could be as persuasive in the political arena as they are commercially shouldn’t come as a surprise. Researchers at Wake Forest University launched a study into this very phenomenon this year and have already found the impact on political views of local and national matters to be significant, citing Colin Kaepernick’s hard-fought success in moving the needle on police reform as one example. “They’re influencing people to watch them,” said Betina Wilkinson, an associate professor of political science on the study. “They’re influencing people to buy the products that they’re selling, but then also now they have the ability to influence people’s views on issues regarding race such as immigration and criminal justice reform.” Meanwhile, the majority of respondents to a recent Politico study said Kaepernick’s activism inspired them to vote in a local, state or national election – and that’s with Kaepernick saying he didn’t vote in the 2016 election.

Gone are the days when an athlete’s impact on the democratic process was mostly incidental. You remember those “studies”: the gubernatorial race that was actually decided by a college football upset. The presidential election that was foretold by the “Redskin Rule”. Or the Super Bowl result. Or the Bears-Colts game.

These days, you’d be hard-pressed to turn on an NFL game without the Texans’ Deshaun Watson, Saints’ Cam Jordan and Seahawks coach Pete Carroll belittling the fact that only 60% of Americans voted in the 2016 presidential election as they encourage you to register to vote. For a league that oozes conservatism and genuflected to the president, whose demented causes aren’t helped by high voter turnout, this may as well be the equivalent of dumping tea into Boston Harbor. Even college football plays against type. Just last month, the NCAA’s Division I Council called for a blackout on practices and games on election day. All the while, athletic departments from Cal State LA to Yale have held registration drives with the goal of signing up all of their eligible athletes.

Clearly, we are now well past the era of athletes voting their bank accounts. Turns out, the money only goes so far. It didn’t spare them the inconvenience of being black or gay in America or otherwise labeled as different. So it figures that when their backs were against the wall, they banded closer together and found a collective resolve. That their impact can already be felt this far away from election day goes to show the hold athletes had on us all along. What’s more, that handle can only get tighter with more practice and progress in the years ahead.