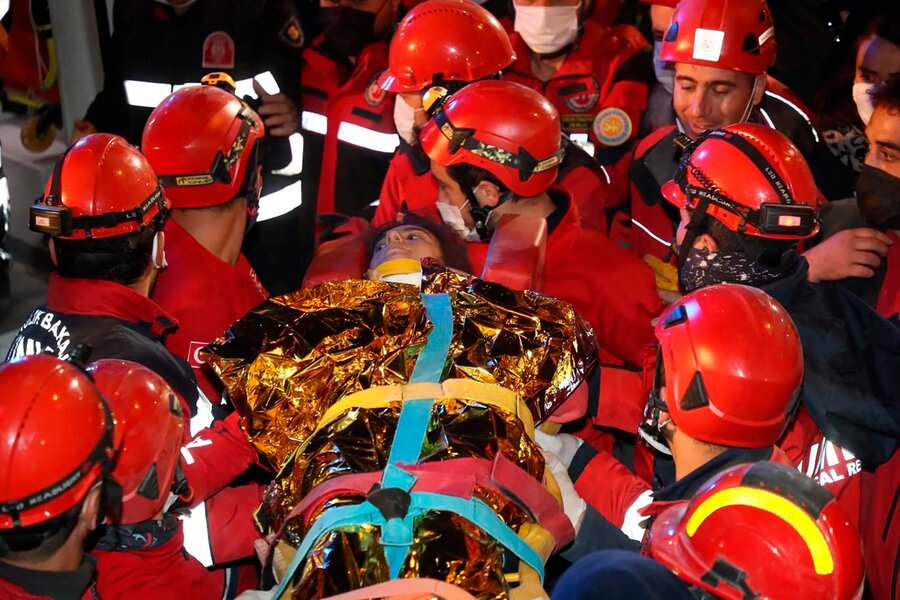 In what one rescue worker called “a miracle,” extraction teams brought two girls out alive Monday from the wreckage of their collapsed apartment buildings in the Turkish city of Izmir, three days after a strong earthquake hit Turkey and Greece.

Onlookers applauded in joy and wept with relief as ambulances carrying the girls rushed to hospitals immediately after their rescues.

Close to 1,000 people were injured, mostly in Turkey, by the quake that was centered in the Aegean Sea northeast of the Greek island of Samos. It killed two teenagers on Samos and injured at least 19 other people on the island.

There was some debate over the quake’s magnitude. The U.S. Geological Survey rated it 7.0, while Istanbul’s Kandilli Institute put it at 6.9 and Turkey’s emergency management agency said it measured 6.6.

Rescue workers clapped in unison Monday as 14-year-old Idil Sirin was removed from the rubble, after being trapped for 58 hours. Her 8-year-old sister, Ipek, did not survive, NTV television reported.

Seven hours later, rescuers working on another toppled building extricated 3-year-old Elif Perincek, whose mother and two sisters had been rescued two days earlier. The child spent 65 hours in the wreckage of her apartment and became the 106th person to be rescued alive, the state-run Anadolu Agency reported.

Muammer Celik of the Istanbul fire department’s search-and-rescue team told NTV television that he thought Elif was dead when he reached her inside the wreckage.

“There was dust on her face, her face was white,” he said. “When I cleaned the dust from her face, she opened her eyes. I was astonished.”

Celik said: “it was a miracle, it was a true miracle.”

The girl would not let go of his hand throughout the rescue operation, Celik said, adding: “I am now her big brother.”

The girl was pictured holding Celik’s thumb while being carried on a stretcher into a tent where she was treated before being taken to the hospital. Rescuers were seen shedding tears of joy and hugging each other.

“Can anyone hear me?” a team leader shouted, asking possible survivors to bang against surfaces three times if they could.

Officials said 220 quake survivors were still being treated in hospitals and four of them were in serious condition.

Rescue workers extricated a 70-year-old man from a collapsed building Sunday, some 34 hours after the quake struck. The man was pulled out of the rubble overnight and doing well at a hospital, according to the Turkish health minister. The minister tweeted that the survivor, Ahmet Citim, told him, “I never lost hope.”

The quake triggered a small tsunami that hit Samos and the Seferihisar district of Izmir, drowning one elderly woman. The tremors were felt across western Turkey, including in Istanbul as well as in the Greek capital of Athens. Hundreds of aftershocks followed.

“It’s not the earthquake that kills but buildings,” he added, repeating a common slogan.

Turkey has a mix of older buildings and cheap or illegal construction, which can lead to serious damage and deaths when earthquakes hit. Regulations have been tightened in light of earthquakes to strengthen or demolish buildings and urban renewal is underway in Turkish cities but it is not happening fast enough.

Two destroyed apartment buildings in Izmir where much of the rescues are taking place had received reports of “decay” in 2012 and 2018, according to the municipal agency in charge of such certificates. Turkish media including the Hurriyet newspaper said one of the apartments, which was built in 1993, was at risk of earthquake damage because of its low quality concrete and the lack of reinforcements. However, the building continued to be occupied.

Turkey sits on top of fault lines and is prone to earthquakes. In 1999, two powerful quakes killed some 18,000 people in northwestern Turkey. Earthquakes are frequent in Greece as well.