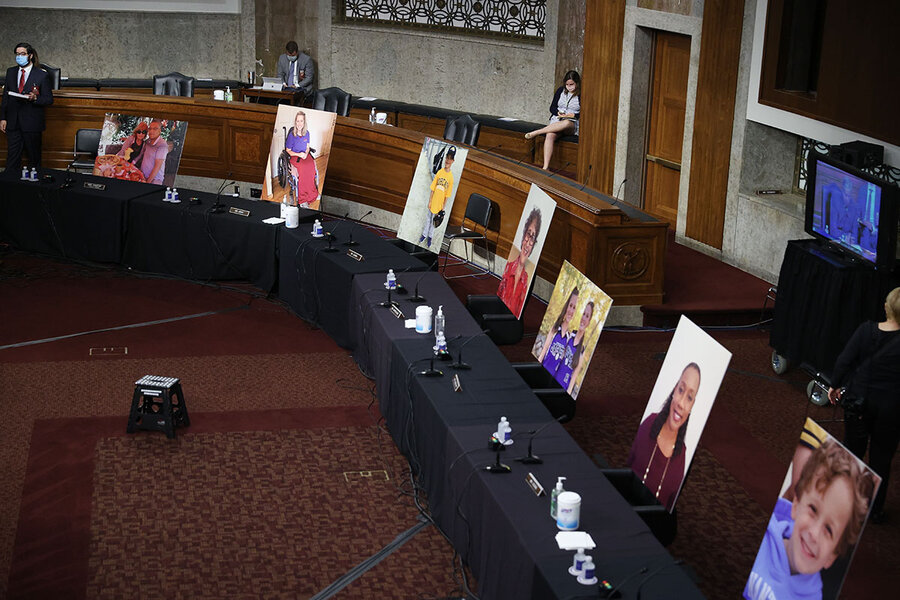 Which conservative justices she aligns with, though, will be an open question in some cases. Even in terms of general judicial philosophies – like originalism, which interprets the Constitution as the framers originally intended, and textualism, which interprets statutes based on a strict reading of the text – the justices differ over how to apply them. On more specific legal doctrines and questions, there have been further differences of opinion.

One of the first cases Justice Barrett will hear argued – on Nov. 10 – is a challenge from several Republican-led states to the constitutionality of the Affordable Care Act (ACA), known as “Obamacare.”

The case, which dominated Justice Barrett’s confirmation hearing, is one of the most high-profile cases of the term. If the law is struck down, roughly 20 million Americans would be at risk of losing health insurance. And the case importantly will be a first signal for how the court’s new conservative majority may approach politicized cases.

The case poses potentially complex questions for the conservative wing of the court, from arcane doctrines on standing and severability to broader philosophies around the role of the Supreme Court itself. And it will offer an early example of how U.S. law will largely be shaped in the coming years: by debates, and disagreements, between those conservative justices.

That wing isn’t “a coherent or uniformly predictable voting bloc,” says Roman Martinez, a partner at Latham & Watkins and a former clerk for Chief Justice John Roberts and, when he was on the D.C. Circuit Court of Appeals, Justice Brett Kavanaugh.

“You’ll see some heated debates within that group of six justices,” he adds, potentially including in this ACA case. “That internal debate on that side will be very interesting to continue to watch.”

Without mandate, can Obamacare stand?

The case to be argued at the Supreme Court on Nov. 10 is the third challenge to the ACA the court will have heard since its passage in 2010 and concerns the law’s “individual mandate” – the requirement that Americans have health insurance or pay a monetary penalty.

In the first challenge to the ACA’s constitutionality in 2012, the court – led by Chief Justice Roberts – controversially upheld the law by interpreting the individual mandate as permissible under Congress’ taxation powers. This year’s challenge stems from Congress reducing that penalty to zero in its 2017 tax cut bill.

The case poses three questions to the justices, including whether the mandate is still constitutional and whether the states should be able to bring the case at all – a threshold question known as “standing.”

If a majority of justices agree with Texas on those two questions, it’s the next question, on “severability” – whether, if the mandate is unconstitutional, the entire ACA falls – that could potentially doom the law.

“If there’s one issue on which the case could turn, it’s severability,” says Ilya Somin, a professor at George Mason University’s Antonin Scalia Law School.

Severability is not a glamorous doctrine, nor is it one that has produced sharp ideological divides between justices, but there are some disagreements. Some statutes include explicit clauses instructing courts on whether provisions are severable or not. But when there isn’t such a clause, what should courts do?

Last July – notably, with the ACA case already looming – slight disagreements on that question surfaced on the court. In opinions from two conservatives, Chief Justice Roberts and Justice Kavanaugh, a majority of the court made clear that, absent explicit instructions to the contrary, courts should favor preserving a statute while severing its unconstitutional section.

“We think it clear that Congress would prefer that we use a scalpel rather than a bulldozer in curing the constitutional defect we identify today,” wrote Chief Justice Roberts in a ruling related to the Consumer Financial Protection Bureau.

In a different opinion a week later, Justice Kavanaugh reached a similar conclusion regarding a law regulating robocalls. “The Court’s precedents reflect a decisive preference for surgical severance rather than wholesale destruction,” he wrote.

The surgery metaphor used by both justices isn’t a coincidence, thinks Abbe Gluck, a professor at Yale Law School.

Severability “has generally been uncontroversial at the court,” she says. So it’s significant that both decisions – by a 7-2 margin, no less – “reaffirmed the court’s long-standing rule that there’s a strong presumption in favor of severability.”

The two justices who dissented from those opinions – fellow conservative Justices Clarence Thomas and Neil Gorsuch – seemed to argue for a narrower view of severability than the majority. Justice Thomas, specifically, criticized the court’s severability doctrine for including “nebulous” inquiries into “hypothetical congressional intent.”

As for the newest justice, in an exchange with Republican Sen. Lindsey Graham of South Carolina during her confirmation hearing this month, Justice Barrett said that “the presumption is always in favor of severability.”

An important caveat here is that the presumption of severability is just that, a presumption.

“Presumptions can change depending on the facts of the case,” says Jennifer Nou, a professor at the University of Chicago Law School. “The outcomes of previous cases aren’t necessarily telling since severability analyses are statute-specific.”

Texas and the U.S. Department of Justice argue that the whole ACA must be struck down with the mandate because the 2010 Congress – which passed the law and intended them to be inseverable – is “the only valid and relevant expression of congressional intent.”

Those critics include Professor Somin and Professor Gluck, who joined an amicus brief with other professors who, while having disagreed on ACA litigation in the past, all agree that the rest of the law should be upheld if the mandate is struck down.

“That’s why you’ve got all of these strange bedfellows coming together on this case,” says Professor Gluck. “It’s unconstitutional to entrench the views of an earlier Congress over the views of a later Congress.”

“This challenge is trying to play a clever game with millions of people’s lives,” she adds. “It really shows the danger of politics in the law.”

ACA litigation might be as political as it gets – the law has survived seven challenges in the Supreme Court and more than 1,000 in the lower courts, largely from Republican officials, since 2010. And while the case will come after Election Day, it will test the strength of the court’s insulation from national politics.

How the justices interpret severability in the case, if they even reach that question after considering standing and the constitutionality of the mandate, will determine the fate of the ACA, and be an early marker of what to expect from the court’s new conservative majority.

For Chief Justice Roberts and Justice Kavanaugh, at least, severability “is grounded in judicial restraint, and thinking the court’s role is not to overturn what Congress does unless there is a clear justification,” says Mr. Martinez, who has argued nine cases at the Supreme Court. They both “see severability as one doctrine to help keep judges within their proper role.”

Justice Barrett has, in a few ways, made her views on the case, and the court’s ACA rulings, clear. In a 2017 law review article she criticized Chief Justice Roberts’ opinion upholding the law in 2012. And in September she participated in a mock court hearing on the case at William & Mary Law School. The mock court voted unanimously to keep the law in place – three judges ruled that the states lacked standing to bring the case, and five ruled that while the individual mandate is unconstitutional it could be “severed” from the rest of the law – but it’s unclear how she voted.