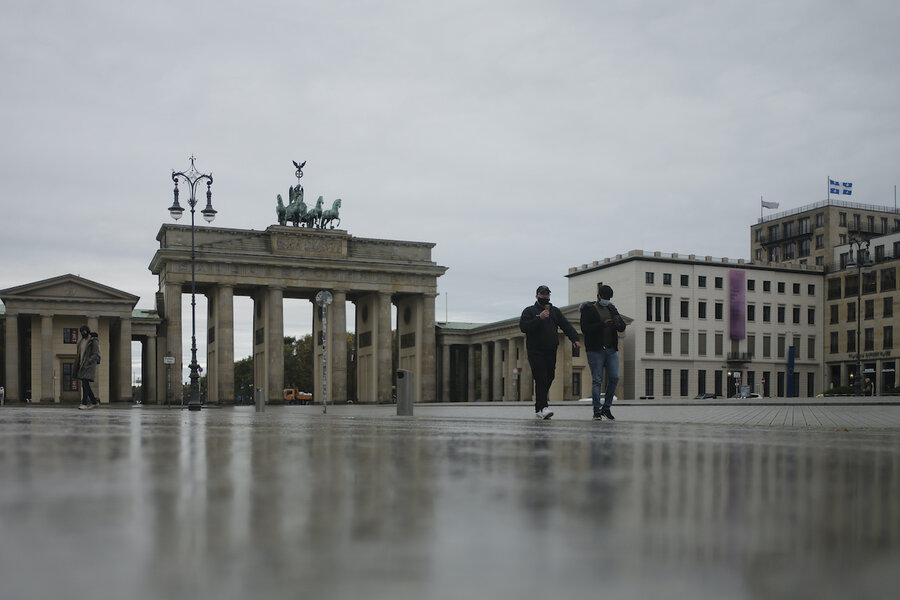 Several European countries are tightening restrictions this week, starting with a partial shutdown Monday in Germany, as authorities across the continent scramble to slow a rapid rise in coronavirus infections that threatens to overwhelm their health care systems.

Britain and Austria will follow suit later in the week, closing restaurants, bars, and many leisure activities. Italy, Greece, and Kosovo also announced new measures. In some places, the new rules – which vary in strictness – are prompting violent protests by people frustrated at once again having to forgo freedoms.

But in many countries, experts are saying the controls should have come weeks ago – a reflection of the increasingly difficult balance many countries are struggling to strike between controlling the virus and boosting already damaged economies.

“We are aware of the frustration, the sense of loss, the tiredness of citizens, also of the anger which is being manifested in these days, by citizens who find themselves living with new limits to their personal freedom,’’ said Italian Premier Giuseppe Conte, as he defended his government’s decision to order new measures.

Restrictions have been slowly ramping up for weeks in many European countries, but virus cases have continued to rise. There was a sign of hope from hard-hit Belgium, however, where a leading virologist said that “the high-speed train is somewhat easing up.”

Overall, Europe has seen more than 270,000 confirmed virus-related deaths, according to a tally by Johns Hopkins University. Experts say case and death figures understate the true toll of the pandemic due to missed cases, limited testing, and other reasons.

In Germany, restaurants, bars, theaters, cinemas, gyms, and other leisure facilities closed in a four-week “wave-breaker” shutdown that seeks to force daily new infections back down to manageable levels. Germans have been asked not to travel, and hotels are barred from accommodating tourists.

In a worrying sign for a country long praised for its testing and tracing abilities, German officials say they can’t track the source of three-quarters of new coronavirus cases. Health Minister Jens Spahn, who himself caught the virus, says he doesn’t know where he was infected.

Chancellor Angela Merkel said the number of COVID-19 patients in intensive care has doubled in 10 days, and the government couldn’t stand by and watch.

“The virus punishes half-heartedness,” she said of the new restrictions, telling Germans that “everyone has it in their own hands” to make them a success.

“We will do try to do everything politically so that this is limited to November,” Ms. Merkel told reporters in Berlin. But she stressed that “we are very much dependent on the majority of people simply being sensible and playing along, and so saving others’ lives.”

The new restrictions are still milder than the ones Germany imposed in the first phase of the pandemic in March and April. This time, schools, nonessential shops, and hairdressers are staying open. Officials will review the situation after two weeks.

England is headed for a tougher lockdown starting Thursday, with nonessential shops and hairdressers closing for a month and people allowed to leave home for only a short list of reasons including exercise. Travel is also discouraged.

The lockdown is supposed to end on Dec. 2, but minister Michael Gove told Sky News on Sunday that couldn’t be guaranteed “with a virus this malignant, and with its capacity to move so quickly.”

The plan, which needs lawmakers’ approval, is facing resistance from parts of Prime Minister Boris Johnson’s own Conservative Party, which worries about its economic impact. Still, passage is virtually assured because of backing from the opposition Labour Party.

Austria is also introducing new restrictions this week. Starting Tuesday and until the end of November, restaurants and bars are being closed – except for deliveries and takeout, as in Germany and England – and cultural, sports, and leisure activities canceled.

Residents will be asked to stay home from 8 p.m. to 6 a.m. They can go out to exercise or to work, among other things, and nonessential shops will remain open.

In Spain, lawmakers last week approved an extension until May 2021 of the country’s state of emergency. The measure puts into place a national nightly curfew and allows regions to impose more localized restrictions, such as limiting movement outside city limits on weekends.

“These measures save lives,” Catalonia police chief Eduard Sallent said. “We are enforcing a measure that is meant to prevent deaths and the collapse of our health care system.”

Cabinet minister José Luis Escrivá told Antena 3 television Monday that “this kind of behavior is to be expected” as people grow weary of restrictions.

In Italy, Mr. Conte announced new restrictions including the closure of shopping malls on weekends, and of museums. Movement between regions will be limited and a “late-evening” curfew introduced, Mr. Conte said, without specifying a time or saying when the measures will take effect.

Greece announced a localized lockdown in its second-largest city, Thessaloniki, and the northern province of Serres.

While cases have been rising and are well beyond governments’ comfort zones across the continent, data from the European Center for Disease Prevention and Control show wide variations in the average number of new cases per 100,000 residents reported over the past 14 days, with Germany’s figure of about 215 as of Monday less than half those of Austria and the U.K. The country currently worst hit, Belgium, has 1,735 new cases per 100,000.

A leading Belgian virologist said that “long-expected points of light” are beginning to appear, though the situation remains “extremely worrying.”

“The number of infections and hospital admissions continue to rise but not as fast anymore,” said Steven Van Gucht of the Sciensano government health group.