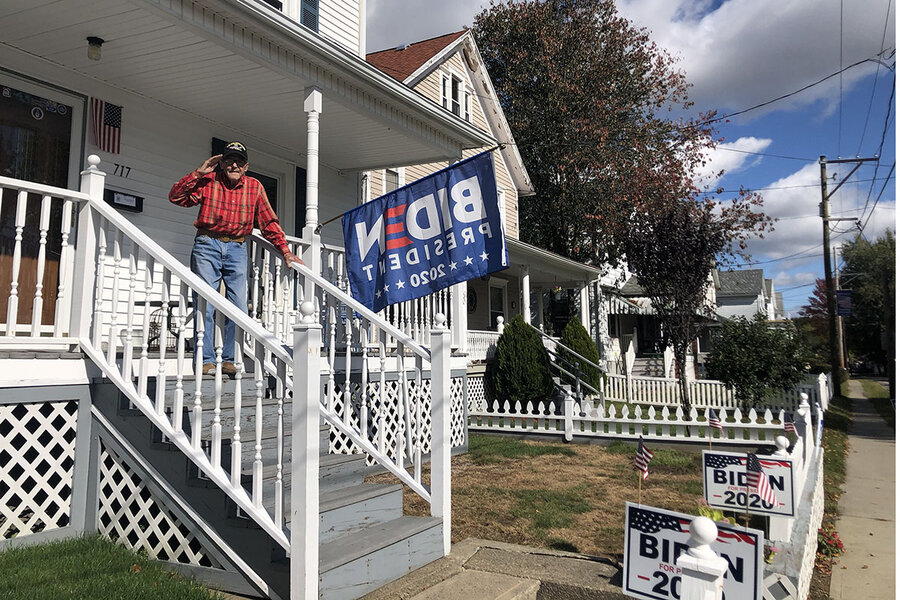 Michael Drop was never a “sign guy” before this election.

Most of his neighbors in northeast Pennsylvania favored Donald Trump in 2016 – and judging by this year’s signs, are enthusiastically supporting his reelection. Indeed, Mr. Drop’s home is flanked on all sides by flags and banners for Trump-Pence 2020.

But while Mr. Drop used to keep quiet about his political preferences, this year he has a new ritual. Every morning, the retiree and veteran gets up early to hang a Biden flag off his front porch and stake several Biden 2020 yard signs along his white picket fence. And every night, to prevent theft or damage, he brings it all back inside for safekeeping.

“The guy around here who used to have one Trump sign? Now he has three, and a flag. So I told my daughter to Amazon some Biden flags for me,” says Mr. Drop. “I’m sort of a little rebel here. … But I’m proud of it.”

As one of the most divisive campaign seasons in modern history enters its final days, there may be at least one silver lining to the nation’s polarized politics: Voters appear to be more engaged than ever. According to Gallup, over two-thirds of Americans say they are “more enthusiastic than usual” about voting in this year’s election, the highest rate ever recorded.

Already, some of that engagement has been manifested through unprecedented early voting figures. More than 79 million Americans have voted so far, which is almost 60% of 2016’s total voter turnout, according to the U.S. Elections Project, a turnout-tracking database run by Michael McDonald at the University of Florida. And while it’s too early to know for sure, it’s possible 2020 will have record turnout overall – one sign of a healthy, not ailing, democracy.

“We’ve never seen these kinds of numbers before,” says Professor McDonald. “We were worried about the conduct of the election in the middle of a pandemic. We were very concerned about the mail-in ballots that have been sent being returned all at the end,” he says. “This is a good news story.”

With five days still to go before Election Day, Texas has recorded nearly 95% of its total 2016 votes. North Carolina, Georgia, and Florida have already banked more than 75% of their 2016 totals.

It’s possible this mostly reflects a change in when Americans are voting, rather than pointing to a spike in total turnout. Because of the pandemic, most states expanded their early voting options in the hopes of reducing the numbers at polling locations on Election Day.

Still, if overall turnout does wind up breaking records this year, one reason – along with the widespread perception of higher-than-usual stakes – might be that states made voting easier.

This year, 43 states plus the District of Columbia offered in-person voting ahead of Election Day. At least 12 – including Wisconsin, Michigan, and Iowa – sent mail-in ballot applications to all voters. Others went even further, automatically mailing actual ballots to all voters. Several states, such as Minnesota and Pennsylvania, extended their deadlines for mail-in and absentee ballots to be received, while a dozen others changed their laws regarding eligibility for mail-in and absentee voting, allowing any registered voter to choose that option.

“The numbers of people who have actually voted early or by mail are just off the charts,” says John Fortier, director of governmental studies at the Bipartisan Policy Center and an expert on early and absentee voting. Still, he cautions against reading too much into the “tea leaves,” saying, “we often see a pattern of people showing up at the earliest day something becomes available.”

Certainly, many of the voters taking advantage of the new rules are not new voters. Jennifer Kornegay, a veterinary technician waiting in line with a few dozen other masked voters at the Fairfax County Government Center in northern Virginia, says she always votes in presidential elections, but this is her first time voting early. She heard news reports about long lines, and since she will be working a late shift on Election Day, she didn’t want to risk missing her chance to vote.

Virginia opened some polling locations as early as Sept. 18, with the Fairfax County Office of Elections announcing it would begin offering Saturday hours one week ahead of schedule to accommodate record numbers of early voters. In mid-October, Fairfax County opened 14 satellite voting locations – almost twice the number of satellite sites it typically opens.

With less than a week to go before Election Day, more than 300,000 votes have been cast in Fairfax County – more than half of the total votes cast for president in 2016.

“It’s amazing that so many people are willing to turn out and wait hours to vote,” says Ms. Kornegay, who brought her young son Joshua with her. Enthusiasm, she says, seems “way higher than in years past.”

Judging by the states that report party registration data, Democrats currently hold a wide advantage in mail-in ballot requests and return rates, whereas Republicans hold a slight lead among early in-person voting. While Democrats may have a slight lead in overall returns so far, that’s been typical in recent election cycles, when Republicans often make up lost ground on Election Day.

Rather than focusing on the early vote, Dave Wasserman of the Cook Political Report suggests that “motivation to vote” is the best metric to measure enthusiasm. On that score, an Oct. 22 Quinnipiac University poll found that 68% of likely voters said they were more motivated to vote than in past presidential elections – a 15% increase from 2016.

Likewise, according to Pew Research, 83% of registered voters say it “really matters” who wins the presidency this year, the highest share in two decades of surveys. And as Mr. Fortier notes, 2018 saw the highest voter turnout for a midterm election in four decades: “a case where there was [apparent] enthusiasm, and it was borne out by higher turnout.”

The U.S. hasn’t seen more than 60% of its voting age population turn out since the 1960s. Some experts believe this year could reach as high as 65%.

Vote.org, a nonprofit, nonpartisan voter registration platform, has seen “exponential growth” in the use of its services this year, says CEO Andrea Hailey – “unlike anything that Vote.org has seen before.” Use of the site really started to pick up around January, she says, far earlier than typical. They saw another surge this summer, amid the protests over racial justice.

“During the protests, people started to find out more about what was happening in their communities. People started asking questions like, ‘Who’s in charge?’” says Ms. Hailey. “The activism was transferring into registering to vote.”

For many on the right, the protests – and the destruction that sometimes accompanied them – had a similarly motivating effect.

Dan Hunsinger, the police chief for Forty Fort, Pennsylvania, leans against the wall in the Luzerne County Republican headquarters. He’s waiting for an event featuring Patricia and Mark McCloskey, the St. Louis couple who gained national attention for pointing guns at protesters who entered their gated community. Chief Hunsinger says he’s never attended a political event like this before – but decided that this year, sitting on the sidelines wasn’t an option.

“I’m scared of what would happen if the liberals got control of our country,” he says. “From seeing everything [Trump’s] accomplished, I’m more of an avid supporter than ever before.”

“My whole family voted for Trump in 2016,” echoes Gary Hontz, a semi-retired truck driver from Schickshinny. “But we support him more now, because he’s done everything he said he’d do.”

The enthusiasm seen across the political spectrum this year may reverberate well into the future. Typically, if someone participates in two or more elections, they are likely to become a lifelong voter, notes Vote.org’s Ms. Hailey.

“People are paying attention to voting and civics in a way we have never seen,” she says. “Now we have a new generation of voters who will participate.”

According to the data firm TargetSmart, 11% of 2020’s early voters – more than 7.6 million people – are between the ages of 18 and 29. This is more than double the number of young early voters who participated in 2016.

Walking around Nay Aug Park in Scranton, Pennsylvania, Jackie Bush-Holcomb lists all the ways she’s volunteered to help the Biden campaign over the past few months. She’s delivered signs, paid $500 to put up a pro-Biden billboard off the highway, and is a part of the Facebook group of almost 500 local women who walk together weekly, decked out in Biden-Harris campaign gear.

“I have never been more involved in politics than I am right now,” says Ms. Bush-Holcomb, who works with her husband, a real estate agent.

“We’ve never had people call us [for signs] like this,” says Susie Connors, a retired teacher walking with Ms. Bush-Holcomb. “I got a call Monday from my hairdresser,” she adds. “Three weeks ago, she was afraid to put a sign up. And now she said, ‘Nope. I’m doing it.’”

Professor Green led a 2016 study in which he and other political scientists examined the role of lawn signs in four different campaigns. On average, they helped increase a candidate’s vote share by almost 2 percentage points. In a close election where every vote counts, that’s an effect worth noting. But there’s an important caveat.

“There is a big difference between saying what they predict, and what they cause,” says Professor Green. Lawn signs are a type of advertisement; their quantity does not predict the winner.

They can, however, be a finger in the wind. Tom Corbett, a Republican who served as the governor of Pennsylvania from 2011 to 2015, remembers driving around outside Pittsburgh ahead of the 2016 election and being surprised at the number of Trump lawn signs.

“That’s when I thought, ‘It might actually be closer than people think,’” says Mr. Corbett. “Signs are a show of enthusiasm, a willingness to show who you will support.”