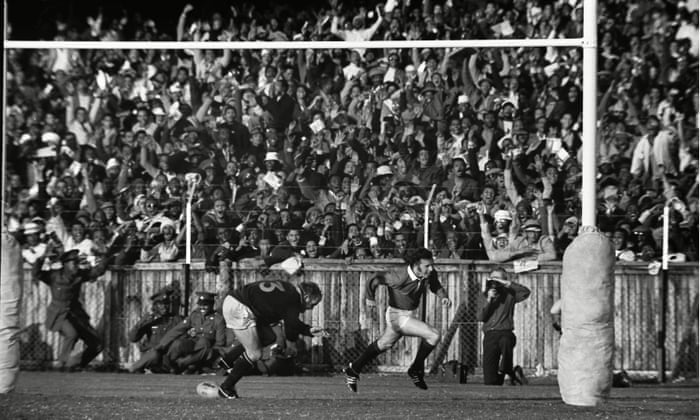 The Wales and British and Irish Lions wing JJ Williams, who has died aged 72 of cancer, helped grace a golden era in the 1970s for the Welsh rugby union side. So high was their profile in Wales that the leading players were recognised by their initials or first names – JJ, JPR, Mervyn, Gareth, Gerald and Phil. Yet such was Williams’s all-round athletic prowess that he could have forged a sporting career on the track rather than in the scarlet shirt of Llanelli and Wales. He was a Welsh Secondary Schools international at rugby union and athletics, and represented his country as a sprinter in the 1970 Commonwealth Games in Edinburgh.

His decision after Edinburgh to concentrate on rugby brought joy to the followers of the game in Wales and supporters of the Lions. Williams went on to win 30 caps and score 12 tries for his country, and he appeared in seven Tests for the Lions in South Africa in 1974 and New Zealand three years later. In South Africa, on the most successful Lions tour of all time, Williams rewrote the rugby record books.

In the words of Bill McLaren, one of the commentators who marvelled at Williams’s feats, Williams was “as quick as a trout up a burn”. But it was not just out-and-out pace that distinguished him. Williams was master of the art of the chip-and-chase, the little kick over the heads of onrushing defenders that enabled him to exploit the space behind them.

It was this skill that helped Williams to one of his two tries in the third Lions Test against the Springboks in Port Elizabeth in 1974, a match considered to be one of the most violent Tests in the sport’s history. The Lions had already won the first two Tests in Cape Town and Pretoria, and the Springboks feared a humiliating whitewash. Two massive fistfights broke out, but Williams and the Lions rose above the mayhem. The wing scored two tries for the second Test in succession, the first Lion of the 20th century to cross the line in a Test. In his second he sprinted from the halfway line and used his trademark chip-and-chase to outflank the despairing Springbok defenders. Williams dabbed the ball down and the moment was captured by one of the finest black-and-white rugby photographs ever taken. 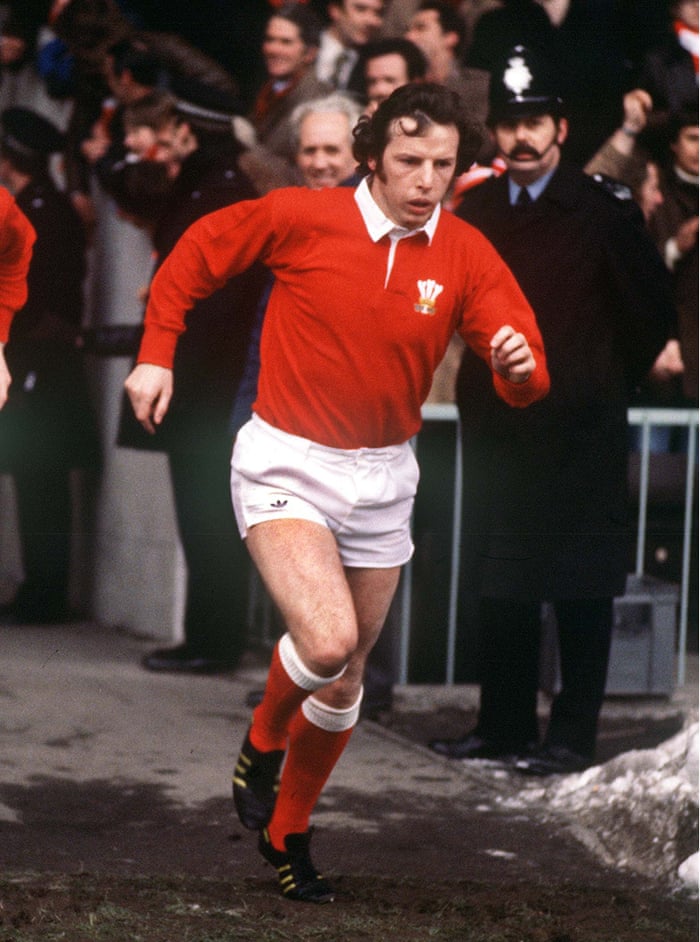 Behind the razor wire in the Boet Erasmus Stadium the black home supporters, including a smiling policeman, are cheering the score. Nelson Mandela, in the 10th year of his internment on Robben Island, was another man smiling as he heard the result, a 26-9 victory that clinched the series, from sympathetic guards. It was to be 21 long years before Mandela, now wearing the Springbok No 6 jersey, was smiling again as he handed the World Cup to South Africa’s captain, Francois Pienaar, perhaps the finest image in the sport’s history.

John James Williams was born in Nantyffyllon in south Wales and educated at Maesteg grammar School and Cardiff College of Education. He was the British Schools champion at 100m and 200m before qualifying as a teacher and initially playing rugby for Bridgend then joining Llanelli in 1972. The Scarlets were a major force in the Welsh club game, as they proved that year with a famous 9-3 victory over the All Blacks at Stradey Park in which Williams, with his blistering speed, began to attract the attention of the national selectors.

Williams went on to play 223 games in nine seasons at Llanelli and won his first Wales cap in 1973. That first cap was as a replacement for Arthur Lewis at a revamped Parc des Princes at the end of March. Lewis had not returned to the field after the interval after injuring his shoulder and Phil Bennett had a rare off day with the boot as France won 12-3.

But Williams’s Wales career was up and running and he became a permanent fixture in the side that dominated the then Five Nations in the 1970s, even if he had to allow Gerald Davies to take the preferred right-wing spot and play on the left flank. In truth, it hardly mattered. Both were far too good for most defences.

As well as those 12 tries for Wales there was a famous try-that-wasn’t in his first game against England, at Twickenham in Williams’s glory year of 1974, when John West disallowed a late effort by Williams. England went on to a rare 16-12 victory and Wales supporters rue the decision to this day. It was a rare setback. Williams went on to help Wales to four Five Nations Championships, including two grand slams.

Williams had begun a career in marketing after leaving teaching when his employers refused him leave of absence to go to South Africa. After his retirement from the game in 1980 he had a sideline as a straight-talking BBC pundit, ruffling feathers in the rugby establishment just as he had ruffled those hapless would-be tacklers on the pitch.

When the country’s international team moved from Cardiff Arms Park to the Millennium Stadium next door at the end of the 1990s he led a campaign to have a room inside it devoted to former Wales players, after founding the charity Wrex, the Welsh Former International Players Association. In later life Williams became a self-made millionaire through his industrial painting business.

He began a sporting dynasty. All three of his children, Kathryn, James and Rhys, represented Wales at athletics, with Rhys winning a European Championship gold medal in Helsinki in 2012.

Williams died nine days after his brother Peter, a rugby coach. He is survived by his wife, Jane, and his children.