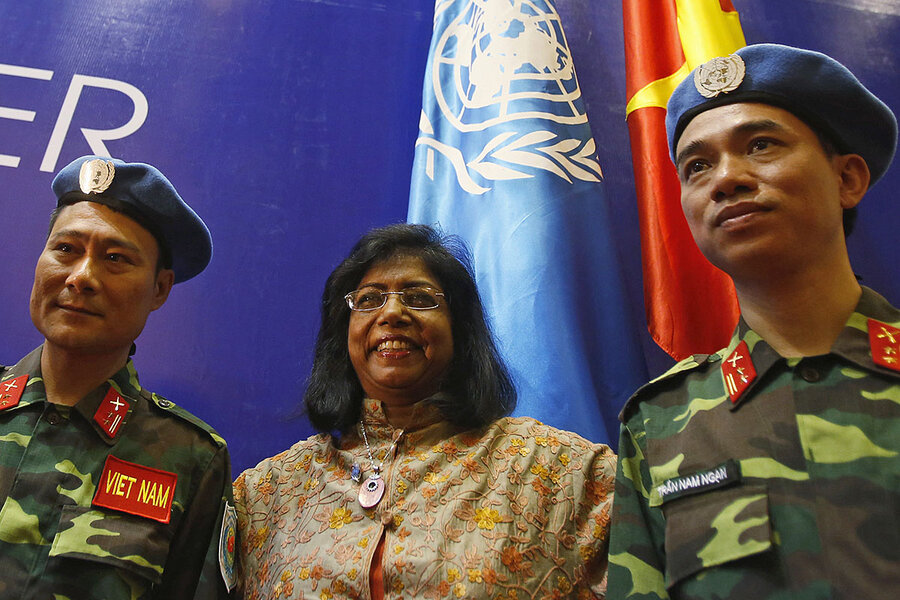 The U.N. has its first female undersecretary-general for political and peace-building affairs, the American diplomat Rosemary DiCarlo. Surveys show that now half of all senior leadership positions at the U.N. are held by women.

Indeed, the scuttlebutt around the U.N. is that if any office or agency dares to send up to Mr. Guterres an all-male list of candidates for a position like head of a peacekeeping mission or director of a department, the response is curt and on the order of: “Where are the women? Get back to me with a revised list.”

The remarkable progress at the U.N. toward gender parity is first a story of leadership. But it also highlights the importance of determination to reach a goal – especially at a time when countervailing geopolitical forces are increasingly buffeting the march of women’s rights and gender equity issues.

Mr. Guterres took the office of U.N. secretary-general after an election in which all of his major competitors were women. Clearly influenced by a nearly successful campaign to elect a woman to run the world’s premier diplomatic institution for the first time, the former Portuguese prime minister made elevating women a top priority.

The recent rapid rise of women in senior U.N. positions – overall since 1996, 78% of senior positions in U.N. peace operations have gone to men, for example – suggests that the pool of capable female candidates was available but untapped.

But behind the strong numbers overall for women in senior positions, experts say challenges remain for achieving gender parity, especially in field postings in the realm of peacekeeping and security missions.

Perhaps the biggest challenge, these experts add, is not unlike what the public and private sectors in countries around the world face as they seek to boost the number of women in leadership posts: retaining junior women on career paths long enough, despite domestic and traditional family-care pressures, to develop strong leadership candidates.

“The emphasis being placed on gender … is yielding good results at the leadership levels,” says Ms. Haq, who was undersecretary-general for the Department of Field Support when she retired in 2014. “But more needs to be done to build up a healthy pipeline of women who can be nurtured, mentored, and trained for these senior leadership positions.”

Specialists who study the trajectory of female hiring, retention, and promotion at the U.N. confirm Ms. Haq’s view that despite considerable progress, stumbling blocks remain for women rising to top positions.

“The real gap remains at the middle management level at the U.N.,” says Paige Arthur, deputy director of New York University’s Center for International Cooperation. “We know that women are coming into the system in strong numbers, but once they get about five years’ experience, they start to leave the U.N.,” she says. “If you think of that middle management as the pipeline to leadership and women are leaving it,” she adds, “then there just are fewer senior-level candidates.”

Ms. Arthur is part of the NYU team that recently unveiled a new “UN Senior Appointments Dashboard” that showcases with bright graphics the upward progression of female hiring and promotion at the U.N. since 1995. Behind the dashboard’s interactive charts, she says, is “a growing sense of gender equity” and progress “at making these senior positions more attractive to a wider and more representative group of people.”

What strikes some about the dashboard is the steep rise in appointments of women to senior positions as of about 2017 – when Mr. Guterres arrived at the secretary-general’s 38th-floor offices at U.N. headquarters in New York.

“The headline frankly is the clear evidence of the secretary-general’s strong determination to do everything in his power to increase women in senior positions,” says Anne Marie Goetz, a clinical professor at NYU’s Center for Global Affairs and a specialist in women’s empowerment in peace building. “He’s not just going after the low-hanging fruit,” she adds. “He’s putting women in some of the tougher [peace and security] posts” – for example in countries that retain a traditional view of women’s role in society.

Still, when it comes to heading up a peacekeeping force or directing a stability mission, women remain much less likely to accept an offer than men – who almost always say “yes.” Why? One reason is that such postings in dangerous or unstable areas usually don’t allow for bringing families along, experts say. And women remain much more likely to turn down a post for family reasons.

“Women more than men are presented with this choice between caring for their families and accepting a position in the field they’ve been working toward for years,” says Vanessa Jackson, CARE’s representative to the U.N. “It’s a massive commitment, and for many women, it’s just too big an ask.”

Also notable in the eyes of some U.N. experts is Mr. Guterres’ perseverance despite signs of rising resistance to the broader women’s agenda, including from the Security Council’s most powerful members.

“Women’s rights, whether on the Security Council or on the streets, are facing serious backsliding,” says Ms. Jackson. “Particularly in 2019 we started seeing that commitment to women’s peace and security issues was very fragile, and that backsliding continues.”

Russia this week provided fresh evidence of the waning interest in women’s rights in the form of a watered-down council resolution on the role of women in peace and security matters.

As president this month of the Security Council, Russia proposed a resolution marking the 20th anniversary of a groundbreaking resolution that first recognized the contributions women make to successful peace and security operations. The 2000 resolution also addressed for the first time issues like sexual violence and the use of rape in conflict, and called for boosting women’s participation in peace and stability missions.

But the proposed resolution incorporates language supplied by China that downplays women’s human and civil rights in conflict and peace building, while prioritizing women’s betterment through development and other economic gains.

That language reflects an increasingly assertive China’s conception of rights, as opposed to the traditional Western focus on political rights and freedoms.

The United States continues to present itself as the world’s leading champion of women’s rights, particularly in peace and security issues, but has remained mostly quiet in this week’s debate. Last year the U.S. shocked its chief Western allies when it insisted on deleting language affirming women’s rights to “sexual and reproductive health” – language the Trump administration interprets as “abortion” – from a council resolution on sexual violence in conflict.

Yet even as such controversies rage, Mr. Guterres pursues his goal of gender equity. And despite the considerable progress he’s made within the U.N., the top diplomat acknowledges the steep climb for women, particularly in conflict settings.

At an event earlier this month commemorating the U.N.’s landmark resolution on women, peace, and security, Mr. Guterres noted that over the course of 2018, women constituted just 13% of negotiators, 3% of mediators, and 4% of signatories in conflict settlements.

And then the man who has fashioned great strides in gender equity within the U.N. concluded, “This must change.”