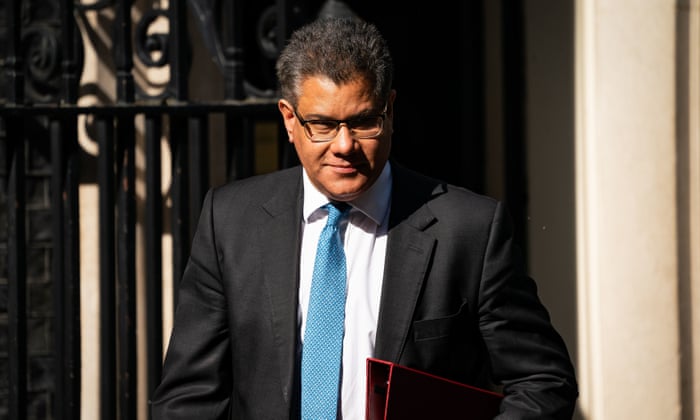 The business secretary, Alok Sharma, is facing questions after a union health and safety inspection identified concerns over social distancing in his private office days before a member of his inner circle tested positive for Covid-19.

The Guardian has learned that an employee in Sharma’s private office tested positive last Monday after reporting Covid symptoms a day earlier, with other members of staff in the Department for Business, Energy and Industrial Strategy (Beis) forced to isolate.

But Sharma – who had a meeting with the individual the Thursday before, with the pair also in the department’s Whitehall office the following day – went on a trip to South Korea on Saturday, where he continued meeting foreign dignitaries after being informed of his colleague’s positive test result when it came through on Monday.

A spokesman for the business secretary said his last “formal meeting” where the individual was present was on Thursday, denying he had any “close contact” with them prior to his departure, including when they were both in the office on Friday, and said he had not been told to isolate by NHS test and trace. However, an undisclosed number of staff have been instructed to isolate, the department confirmed, and an area of the office has been deep cleaned.

Unions representing civil servants have written to the BEIS permanent secretary, Sarah Munby, to express “extreme concern” following confirmed cases. There are understood to have been two other recent Covid cases among BEIS staff. The letter, from Public and Commercial Services (PCS) Union, FDA and Prospect, warns: “Health and safety rules apply to everyone irrespective of grade or role. The recent confirmed case of the virus in the private office has now recklessly put a number of people at risk who could otherwise have been working from home. This is unacceptable.”

It references a health and safety inspection carried out on Thursday 22 October – the same day of Sharma’s meeting including the individual who has tested positive for Covid – which found concerns.

A copy of the PCS health and safety report seen by the Guardian, which said there were 28 staff working on the floor with ministerial offices – including eight in Sharma’s office – compared with only 12 on some others, stated: “Ministerial offices, especially SoS [secretary of state], were very crowded and by far the busiest part of the building. The offices apparently had been given a ‘dispensation’ … to allow two people to sit on each bank of desks, contrary to the guidance applying in the rest of the building.

“Whilst they may well have been sitting 2 metres apart, because of movement in the office and narrow corridors, staff were often passing each other very closely and we observed staff standing closer together than 2 metres. We believe there are too many people (8 PO staff when we inspected) routinely in the SoS’s private office to enable social distancing and so protect the health and safety of all staff.”

It was a pleasure to meet with former @UN Secretary-General Ban Ki-moon in Seoul today.

As #COP26 President, I warmly welcome his work with @gggi_hq to drive ambition in South Korea 🇰🇷 and around the world to meet the crucial challenge of #TacklingClimateChange pic.twitter.com/zgL8ilOmrT

A PCS spokesman said: “These revelations are extremely shocking and Alok Sharma has some serious questions to answer. Our members will be extremely worried at potentially being exposed to Covid-19 and will rightly want to know if proper safety processes were followed.”

On Tuesday, Sharma, who is president of the COP26 UN climate change conference being hosted by the UK in Glasgow next year, met two South Korean ministers, as well as the acting mayor of Seoul and South Korean National Assembly members working on the Green New Deal.

If an individual is informed by NHS test and trace that they are a “contact” of someone who has caught Covid-19, by law they must isolate for 14 days from their last point of contact with the person.

Government guidance defines a “contact” as “a person who has been close to someone who has tested positive for Covid-19 any time from two days before the person was symptomatic up to 10 days from onset of symptoms (this is when they are infectious to others)”.

A spokesperson for the business secretary said: “Mr Sharma has followed government guidelines at all times. He had no close contact with the individual prior to his departure and has not been told to self-isolate by NHS test and trace. As required when travelling to South Korea, the business secretary was tested in the UK prior to departure and again on arrival in South Korea. Both tests returned negative results. Mr Sharma followed the local guidelines at all times during his visit.”

A Beis spokesperson added: “We have put in place extensive measures throughout the building to ensure that the two-metre social distancing rule is being observed, and to maintain a covid-secure work environment.

“In line with government guidance, the vast majority of our staff continue to work from home, and have done since the beginning of the pandemic. But the extensive measures we have taken ensure that a small number of colleagues who cannot carry out their normal duties from home are able to use the office, as well as those whose home or personal circumstances mean that they need to be able to access the building at least some of the time on a voluntary basis.”