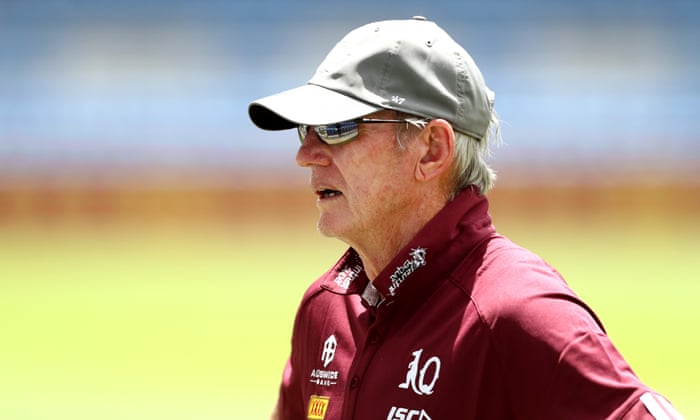 Leave it to Wayne Bennett to put a positive spin on a spiralling mess.

“I’m confident without being overconfident,” the Queensland coach said on Tuesday, 24 hours before a State of Origin opener that could, in the event of additional injuries to his already-ravaged squad, just about signal the impending death of his side’s series.

“Tough game, you know that the other team will be up for it, but I think we’ve done the best we can.”

They are the words of rugby league’s ultimate survivor, a septuagenarian with a knack for rising from the dead – and bringing a squad of stayers with him.

This time, though, Bennett will not be able to call upon the heroes of series past. He no longer has the likes of Billy Slater, Darren Lockyer, Johnathan Thurston, Cameron Smith, Greg Inglis and Cooper Cronk at his disposal.

And he will not have the luxury of, say, luring Alfie Langer back from England to orchestrate a pivotal 2001 game-three triumph – one of his five series wins from the total seven in charge. But the other interesting thing about that particular series is the fact he blooded 10 debutants and won game one, his first back in the job, after his predecessor lost the previous series.

On Wednesday, 19 years later, Bennett will likely field eight debutants at Adelaide Oval, in his first match back in the hot seat, as his depleted Maroons attempt to thwart an assembly of New South Wales stars from steamrolling their way to a third consecutive series win.

Indeed, this incarnation of Queensland are the biggest Origin outsiders since the 1990s. As Brad Fittler sows the seeds of a Blues dynasty, injuries, retirements and suspension have devastated their enemies of the state.

But that, in and of itself, is not the point. Nor is Bennett’s longevity. The crux is that one of these two factors will be magnified by this year’s condensed Origin format, and whichever it is will either make or break the Maroons.

Three games in 15 days suggests a preordained war of attrition, an on-field series of Survivor lost by the squad whose injuries pile up the quickest on the unprecedentedly short turnarounds. Queensland, as has been reported ad nauseam in recent weeks, already find themselves at a distinct disadvantage thanks to the absence of several significant incumbents including Kalyn Ponga, Moses Mbye and Michael Morgan.

Their series hinges on young but inexperienced legs. On how, for instance, Queensland’s first rookie centre pairing hold up following Tuesday’s injury scares to Kurt Capewell (groin) and Brenko Lee (calf). Losing either would add further pressure to a backline already shaking on its foundations.

Yet even Fittler recognises the potential power of galvanised rookies, having blooded 11 debutants in game one of 2018 – his first in charge – that soon became the Blues’ first series win since 2014.

“We had 11 players playing their first game two years ago, so I know exactly what it’s all about,” Fittler said on Tuesday. “The one thing you know is they have very experienced coaches, so they know how to get a team working together.”

Which segues nicely into influencing element No 2. Bennett’s strength lies in his simplicity. The 70-year-old has not endured at the top for three decades on a throne made of pure imperiousness.

Demanding – some say arrogant – as he is, the “master coach” and “super coach” monikers are more a reflection of his consistency and ability to relate to his players. He does not try to reinvent the wheel – rugby league is not a complicated game on the field. It is off it where he cultivates the will to win, and an uninterrupted three weeks in camp, without losing his players to their NRL clubs after each game, presents a unique opportunity to write his own narrative.

Paul Vautin on Tuesday called Bennett’s imprimatur “guts and intestinal fortitude”. It could, the Queensland great said, help this motley crew engineer the biggest upset since his own 1995 Maroons side pulled off an extraordinary 3-0 win.

Whether 2020’s Origin mini-series becomes a regular occurrence in future years is up for discussion and may come down to the all-powerful television ratings. Last week, ARL Commission chairman Peter V’landys was leaning towards a shift back to the traditional mid-season slot in 2021.

“ … if it’s a runaway success we might look at it again,” V’landys said. “At this stage it will go back to mid-season.”

Even if it does, there is merit to the argument in favour of briefly halting the regular season to cater for a similarly fast-and-furious format, not least because clubs will have all players available every week. Which side of the fence Bennett ultimately sits may depend on what goes down over the next three weeks.