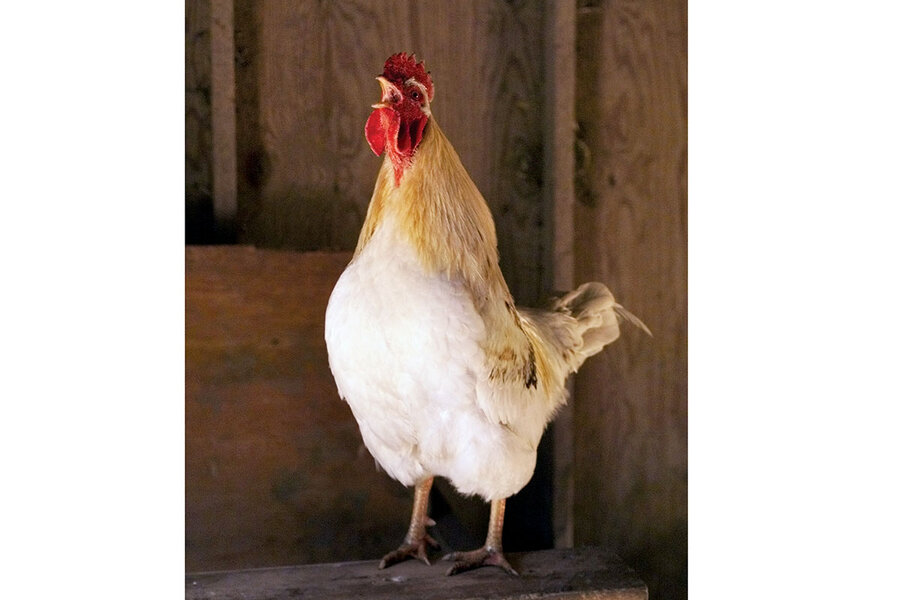 In late May, a friend asked if I could take in her sister’s month-old chick, who was beginning to look like a rooster. The sister lived in a village that allowed her to have a backyard flock of six hens but no noisy rooster. Because mine had died, I welcomed adopting the little fellow.

“He loves to sit in my lap,” my friend said as she lifted the black chick out of a box. He was a Black Copper Marans, a French breed.

I’ve kept chickens in healthy and safe conditions for more than 40 years. In the winter, I cut them kale from my garden. But I’ve never had enough free time to make them pets. In the dim evening light, I placed the little rooster in the coop.

In the morning, an unhappy bird ran out to me. The young rooster didn’t know how to socialize with the hens. So I carried Cocoa to my garden, and he strolled around while I weeded. Now and then he would hop into my lap to cuddle, and I would pet him before he resumed his search for grubs and bugs. When I needed to tend to a different section, I carried him along and enjoyed his soft chirps as he investigated the new area. Finally, worn out, he napped beneath a broccoli plant.

Instead of returning Cocoa to the coop, I set up a home for him in another shed. Two days later a shipment of chicks arrived. But instead of accepting the infant birds, Cocoa pecked at them as if they were intruders. So, I took him to the goat barn, where he settled into an empty stall. My goal was to reintroduce him to the laying hens, but Cocoa had other ideas.

The next morning, I discovered him in the goats’ stall, following around the 2-month-old kids. The little trio played in the paddock, but when mama and babies headed to the pasture, Cocoa stayed behind, too timid to trek into an open field. I was thankful for his cautious attitude, because hawks have snatched chickens that managed to fly out of their pen and roam the barnyard.

Slowly, Cocoa grew taller and stouter. One day I spied him strutting beside the goats as they grazed. Goats are herd animals and are miserable if made to live alone without caprine companionship. So I wondered: Had they accepted Cocoa as a member of their goat clan or was he performing the traditional role of a rooster protecting his flock? Most likely the goats’ presence saved the bird’s life by shielding him from the young red-tailed hawk that often circled the pasture. In the evening I would find Cocoa back in the empty stall, roosting on the upper board of the manger. I would sprinkle a handful of grain on the board and pet him as he pecked at the bedtime snack.

As Cocoa matured into a majestic rooster with gold streaking his plumage, he would sometimes stand at the fence separating the goat paddock from the chicken yard and stare at the hens. Was he pondering his identity? With cooler weather coming, the time arrived to move our four new laying hens into the coop along with Cocoa. We performed the task in the dark, hoping the hens would soon make friends with the newcomers. The goats bawled as we took Cocoa away, but we assured them that they would continue to see their rooster.

Now Cocoa roams the chicken yard presiding over his flock. But sometimes he pauses at the fence and communes with the goats, enjoying his emeritus status as a member of their herd.

And then he raises his head and crows.