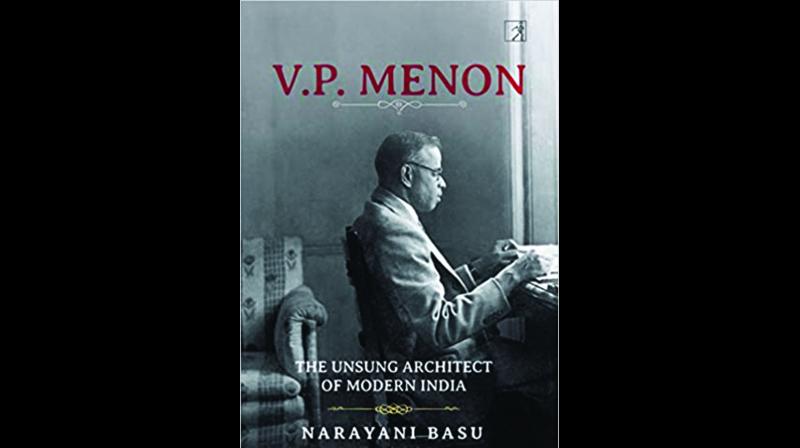 I picked this book with great enthusiasm. Because I do believe that in many ways V.P. Menon is the architect of modern India and that he is largely unsung. I have read both The Transfer of Power in India and The Story of the Integration of the Indian States by Menon several times over. In Menon’s books, incredibly detailed, informative and insightful, you get a remarkable portrait of Sardar Vallabhbhai Patel and the enormous task he was entrusted with: to bring together a disparate and motley group of princely states within the borders of India.

But hovering below the surface of Patel’s astounding achievement was the writer himself, Menon. It is clear within the story that Patel could not have done this without Menon and yet Menon himself was ephemeral, elusive. This biography, by his great granddaughter, seemed like the perfect answer. To the riddle that was Menon and to acknowledgement at last of his formidable accomplishment.

When all the controversy erupted over Jawaharlal versus Patel, at the launch of this book, I was still at the beginning of the story, where in a sleepy Kerala village and with an indulgent mother, Menon, was a brilliant if rebellious young student. Here, we focus on the development of a young man. The dynamics of family life. And how childhood moulds us for the future. There are dramatic moments here. That a young boy should be so angry that he burned down his school and ran away from home. The sheer grit that made him work as a labourer in the Kolar mines and claw his way up. The losses and tribulations that the young Menon faced and his dogged determination to rise above every setback. That a man without formal education could rise so far and so brilliantly.

This was the story I wanted. Alas, it was not to last long. Between the fascinating beginning that draws you in and the final, moving, emotional end, V.P. Menon remains lost. Instead of a story of his life, with his insights, you get the story of the last days of the Raj and India’s Independence. You are not even sure whether this version is that of the writer Narayani Basu, as a historian, or that of Menon. There are pages and pages of history — available anywhere for anyone to read — and one line thrown in about what Menon thought about what was going on.

It is evident early on though that Basu, and perhaps Menon, is no fan of Jawaharlal Nehru’s. For one, he is called “Jawaharlal” through most of the book, although everyone else is referred to by their surname. Nehru is also dismissed as a petty vindictive tyrant with no thoughts of his own. You may consider this harsh or fair but either way, this view is not sufficiently substantiated. Now whether Basu picked this up from her family or these are her views as a historian or whether Menon was clear about his feelings is not fully explained to the reader. And so also with Menon’s own personal life. It is interesting enough, his rocky relationship with his sons, the collapse of his first marriage, his relationship and subsequent marriage to his mentor’s wife, all you get is the bare bones. There are no insights, no conflicts, no impression of how his life affected his work. Or vice versa.

Indeed, until you reach the transfer of power, Menon himself gets lost in the tumultuous events around India’s Independence. And if you want to read about the transfer of power, Menon’s own books are freely available. There are missed opportunities here. The friendship between Mohammed Ali Jinnah and Menon would have made fascinating reading. There are nuggets on how Menon felt about Partition which are too disparate and disconnected to make a lasting impression on the reader. The struggle for power, such as it was, between Patel and Nehru finds a few pages at the end and not enough before or between. Patel himself, who played such an important role in Menon’s life, does not shine through.

It is possible that the linear structure of the biography is the problem. That by juxtaposing Menon’s lifeline along that of India’s, the man himself has got lost in the turmoil of the times. If instead, we were told Menon’s story without India’s story taking centre-stage, we may have learnt more about him. Basu tells us that Menon was unpredictable and remote and you feel that sometimes in his interactions with his sons. But clearly, he loved his second wife. That dichotomy is not explored.

For this reviewer, the fact that a book has been written about V.P. Menon is insufficient. His character and achievements are such that he deserved a more intimate portrait without the massive presence of Indian history as a distraction and detraction.

The writer is a senior journalist who writes on media affairs, politics and social trends. She tweets at @ranjona.