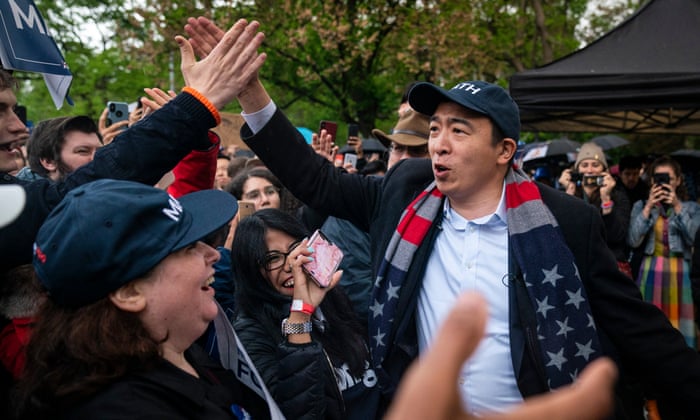 “You do karate, chink?” the biggest bully barked at Andrew Yang, as he kneed the future 2020 US presidential candidate in his groin and sent him face-first into the schoolyard dirt.

It was a taunting question Yang’s tormentors often asked him before they beat up the town’s only Asian kid. Yang was an easy target. He was smaller and scrawny compared to his peers – something he couldn’t help because he’d skipped a grade to join them. Yang endured years of beatings, until he decided to take his aggressors’ advice and train in a martial art.

It took a few years, but by age 14, Yang was able to do something he hadn’t before. He won a fight.

“Someone picked a fight with me and I surprised them because I started to fight back,” Yang told the Guardian. “He hit me first and didn’t expect me to hit back. He seemed really surprised by the suddenness of it.” It wasn’t a long affair, but it ended with Yang having be pulled off his attacker by the other astonished schoolchildren.

What does Yang’s experience have to do with sports? For mixed martial arts, it turns out a whole lot. As an active campaign surrogate on the trail, Yang is reportedly high on Joe Biden’s list of potential cabinet appointees should the former vice-president win Tuesday’s presidential election. Depending on his placement, Yang believes he could get the Muhammed Ali Boxing Reform Act, which establishes federal protections for boxers, extended to MMA within the next two years. All MMA promotions would be affected by the new regulations, but none so much as the UFC, which enjoys a global lion’s share of the sport’s overall profits.

Yang, who studied kung fu and competed in taekwondo through his early 20s, loves watching UFC fights. He got hooked on a reality show called The Ultimate Fighter in 2005 and was immediately drawn to it.

The brainchild of the UFC, TUF is widely credited with introducing mixed martial arts to a new generation of fans who supported and sustained the new sport as it punched, kicked and choked its way into mainstream consciousness in the mid-2000s. Yang was among that crucial generation. He waxes about the first live TUF finale pitting Forrest Griffin against Stephan Bonnar – a barn-burner that became water-cooler fodder that Monday and convinced Spike TV to sign TUF up for a few more seasons. Yang even had his bachelor party at a UFC event in Las Vegas.

As Yang’s appreciation for MMA grew, so did his connection to the fighters and his curiosity as to how it all worked. Many state athletic commissions are required to provide a list of the fighters’ purses. When Yang looked at one, his jaw dropped. The numbers just didn’t add up.

“I admire the fighters, as they’re disciplined in their training,” Yang said. “They should not worry about making ends meet when they’re one of the top fighters in the world.”

With data provided last year through discovery in an anti-trust lawsuit currently playing out against the UFC, it can be ascertained that anywhere from 10% to 18% of the UFC’s total revenues go to the fighters, as opposed to the 50% athletes get in other major sports. It should be noted that these figures only reflect fighter pay through 2017. Today, more fighters are making million-dollar paydays – newly retired lightweight kingpin Khabib Nurmagomedov – made at least $3m (but probably closer to $10m) for his seven-minute destruction of Justin Gaethe at UFC 254 a week ago. Yet two other fighters on the same card took home purses closer to $13,500.

Yang saw such a discrepancy in fighter pay that he included ‘Empowering MMA Fighters’ as one of his presidential campaign platforms. His plan was to bring federal regulation to MMA through the Ali Act, which was passed in 2000 to protect prizefighters from coercive contracts, among other fighter protections when dealing with promoters.

“The Ali Act would fundamentally change the UFC’s business model,” wrote Erik Magraken, a managing partner of the British Columbia litigation firm MacIsaac & Company, who has written extensively on the subject for combatsportslaw.com. “The door would be open for more competition from other promotions. Stars would enjoy market free agency far more frequently and open bidding from multiple promoters would be a reality. Many of the exploitative contract provisions the UFC has used to gain their position in the market would be prohibited.”

Currently, MMA fighters are widely signed to multi-fight contracts with lengthy duration terms. If a fighter is injured or turns down a bout for another reason, their contract freezes until they become active again. The UFC also has a liberal ability to cut a fighter at any time.

“The UFC has such market prominence that they can treat their fighters, even stars, as replaceable cogs in the machine,” wrote Magraken. “This option would largely be lost if the Ali Act was in place. Every prominent fighter would force the books to be open. Many fighters would take a stand.”

Free of long-term contracts, fighters would have the ability to negotiate one fight at a time and talent would likely spread more evenly across all the sport’s promotions. The Ali Act would also address rankings. Unlike boxing, there are no independent organizations to rank the fighters, largely because the UFC hasn’t agreed to work with one. The UFC provides its own rankings for the independent media to vote on, though a vast majority do not participate. Recently, welterweight Leon Edwards was abruptly cut from the UFC’s rankings, because he wouldn’t commit to any of the opponents presented to him. A few hours later Edwards had a new opponent and his name returned to the rankings within hours.

“Promoter-controlled titles would be eliminated,” wrote Magakren. “Instead, these would be overseen by outside sanctioning organizations. These organizations are regulated under the legislation with requirements for objective ranking criteria and other protection for the fighters – rank and title would become objective property rights of fighters. These could then be used when exploring and negotiating their market worth instead of tools of promotional control.”

Yang believes this will be a strong start, but federal regulation will be the first swing in a one-two combination.

“Applying the Ali Act would a big step forward, but to me, MMA fighters need either a union or pro association, so they can negotiate for a fairer share of the revenue stream,” Yang said. “Big changes need to happen, and I’d like to do this on a human level.”