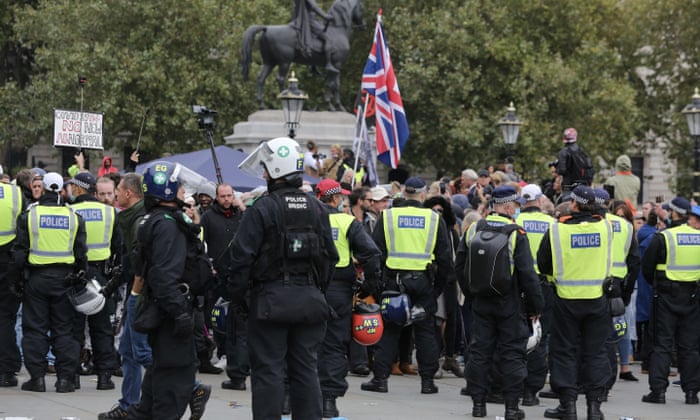 Police chiefs have warned they will crack down harder on people who fail to show “civic responsibility” by ignoring coronavirus restrictions and fines as England heads into lockdown this week.

Amid concerns over low compliance with self-isolation rules even before the new measures, the chief constables of five forces in the north-west of the country said they would “collectively target” the public who flout lockdown by holding large gatherings, music events and parties.

In an open letter, they said a minority of people seemed “incapable of demonstrating any civic responsibility” and that they would now “face the consequences of greater levels of enforcement”.

The senior officers also said they were seeking support from the government and judiciary to consider how they could rapidly bring to justice the “significant proportion” of people ignoring coronavirus-related fines.

The message from the forces covering Cheshire, Cumbria, Greater Manchester, Lancashire and Merseyside comes after a period of tightened restrictions for much of north-west England due to high numbers of Covid-19 cases.

Strict new rules are expected to be rolled out for the whole of England from one minute after midnight on Thursday, including the instruction to stay at home except in a handful of circumstances including exercise and essential shopping.

Last week, the National Police Chiefs’ Council (NPCC) said more than 20,000 fines had been issued in England and Wales since coronavirus restrictions were introduced on 27 March. No data was available on how many had been paid.

Of these, 1,103 fines were issued in the four weeks to 19 October to people breaking England’s local lockdowns and for gatherings of more than 30 people. The NPCC said the highest level of financial penalty – £10,000 – had been issued 64 times in England and twice in Wales for people holding raves, house parties, or protests of more than 30 people.

Prof Chris Whitty, England’s chief medical officer, said there had been a remarkable level of compliance among the British public to the draconian restrictions on social contact.

However, there have been concerns that the majority of people – up to 80% – fail to quarantine fully when asked to do so by test and trace. Police chiefs are planning to release data in the coming weeks on how many people have been referred to officers for breaching self-isolation.

In their letter on Wednesday, the senior officers said they had seen first-hand “the misery the pandemic has caused” but had received “great support from the majority of our communities”.

They said their forces had taken a “very measured” approach to enforcement and used a model of “engage, explain, encourage and only as a last resort enforce” in relation to issuing fines.

The public wanted a “consistent and robust” approach to enforcement and that the introduction of local restrictions had seen forces take a “firmer stance” over restrictions and move more quickly to issue fixed-penalty notices, they added.

Addressing potential rule-breakers, the chief constables added: “To the minority who feel the restrictions don’t apply to them, be prepared to face the consequences of greater levels of enforcement.

“We will collectively target those who flout the restrictions, particularly those organising large gatherings and music events, repeatedly holding parties or deliberately causing harm to our communities by not following the restrictions such as self-isolating where necessary.”