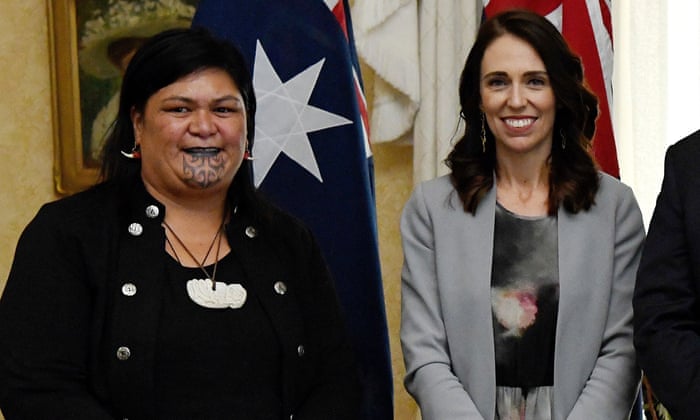 A major New Zealand website has pulled the books of a local author after she made comments about the country’s incoming foreign minister, Nanaia Mahuta, that many considered offensive.

Mahuta is the first woman to be appointed to the role of foreign minister and the second-ever Māori person.

In 2016 Mahuta became the first Māori woman to display a moko kauae [sacred facial tattoo] in parliament and has been promoted from associate minister of housing and Māori affairs to one of the highest ministerial portfolios.

On Monday writer Olivia Pierson publicly criticised Mahuta, making comments about her moko and suggesting it was inappropriate for a diplomat.

“Moko is a statement of identity, like a passport,” Mahuta, from the Waikato-Maniapoto tribe, told the Guardian in 2016. “I am at a time in my life where I am ready to make a clear statement that this is who I am, and this is my position in New Zealand.”

Mahuta had the moko kauae inked in 2016, alongside 13 other prominent Māori women. They are usually bestowed on high-ranking Māori women as a reflection of their standing and mana, or power, in the community.

Marama Fox, co-leader of the Maori party, told the Guardian in 2016: “Apart from the fact that I find her moko kauae stunningly beautiful, it is an expression of her whakapapa [genealogy] and uniqueness.

“I’m proud as a Māori woman to sit alongside her in parliament restoring to our political landscape a symbolic gesture of rangatiratanga [self-determination] previously dissuaded during our colonial struggle to give vote to Māori women in their land of inheritance.”

On Twitter Pierson wrote: “Facial tattoos, especially on a female diplomat, is the height of ugly, uncivilised wokedom!”.

Then I’ll say it again – facial tattoos, especially on a female diplomat, is the height of ugly, uncivilised wokedom! https://t.co/rjphfeISY4

On her website, Pierson describes herself as a “free-thought advocate”. Her most recent book is Western Values Defended: A Primer. The Guardian has approached Pierson for comment.

Pierson’s comments were quickly censured, with many New Zealand twitter users encouraging her to delete her original post.

Pierson’s supporters say she has become a victim of “extreme wokeness”, and the move by Mighty Ape was an example of “cancel culture” in action.

I just did a big order from Mighty Ape yesterday and I am tino pleased about it 🥰..

Mahuta, who has been an MP for more than 20 years, has previously said she wanted to break down the negative associations that facial moko have with gang membership in New Zealand.

“I think there is an emerging awareness about the revitalisation of Māori culture and that facial moko is a positive aspect of that. We need to move away from moko being linked to gangs, because that is not what moko represent at all.”

Mahuta said that since she was inked, the majority of responses had been positive and inquisitive – and sparked conversations about Māori culture and traditions in modern, multi-cultural New Zealand.

Traditionally women’s facial moko were confined to the chin area, while men’s could be across the whole face.

Mahuta has said her moko is both highly individual and also intrinsically linked to her tribe, whanau (family) and bonds to the rivers and mountains of New Zealand.