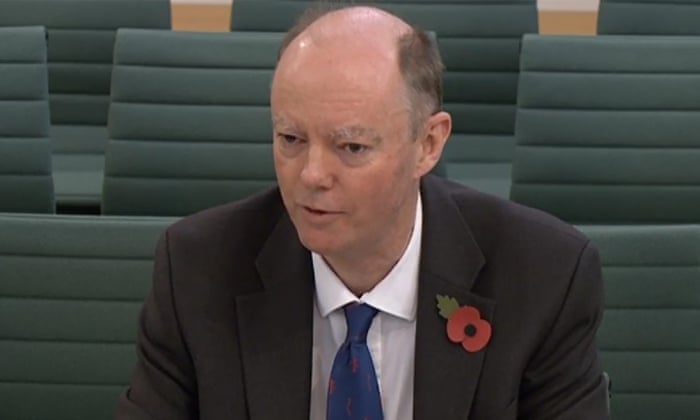 A high-profile proposal to avoid lockdown by letting the coronavirus run wild in the young and healthy while shielding the most vulnerable is dangerously flawed and operationally impractical, according to England’s chief medical officer.

Prof Chris Whitty told MPs on the science and technology committee that the Great Barrington declaration, put forward by three scientists at Oxford, Harvard and Stanford universities, would lead to a very large number of deaths and was unlikely to achieve such widespread immunity that the epidemic would fizzle out naturally.

Speaking at the hearing with Patrick Vallance, the government’s chief scientific adviser, Whitty said he expected the month-long lockdown for England that Boris Johnson announced at the weekend to have the desired effect of bringing the R value below 1 across the country, causing the number of cases to fall.

The scientists, who were called before the committee to explain the evidence behind the latest lockdown, said that left unchecked, hospital admissions would exceed levels seen in April, a situation Whitty described as “entirely realistic”.

Lockdown aim is to reduce Covid enough by 2 December to move on, says Whitty – video

Questioned on England’s strategy for lifting the lockdown, Whitty said he expected changes to be made to the three-tier system imposed in October. Vallance said further measures would be needed until the spring to keep infections down.

“We’re likely to need degrees of social distancing and other measures over the course of the winter. It’s only really come springtime and beyond when other things may start to allow some more relaxation,” Vallance said. Vaccines, new drugs and improved testing would all be important for restrictions to be eased, he added.

His comments came as Dido Harding, the under-pressure head of NHS test and trace, conceded the system needed to improve during the second lockdown if the country was to recover.

Lady Harding has faced criticism for the performance of the six-month tracing system, which last month contacted less than 60% of infected people’s contacts.

In an interview conducted at the CBI’s virtual annual conference on Tuesday, she said that the main problem was finding and testing people who had Covid but displayed no symptoms.

“Every country is grappling with the same problem. Despite everyone’s best efforts and all of the work of our team in NHS test and trace to be the second line of defence, the virus is spreading too rapidly and too widely,” she said.

“As we go into another really challenging period for us as a country, it is time for the organisation that I lead to take the next big leap forward. We will be focusing on improving NHS test and trace so that when England emerges from lockdown we are better able to live with Covid.”

MPs on the science and technology committee earlier pressed Vallance to explain why he had shown out-of-date modelling from Cambridge University and Public Health England at the prime minister’s announcement of the new lockdown on Saturday. The modelling suggested that deaths could reach 4,000 a day in the coming weeks if nothing were done, a figure the Labour MP Graham Stringer said “frightened a lot of people around the country”.

The modelling was based on the growth of the epidemic before the tier system was brought in and gave unrealistically high numbers of deaths.

Vallance defended the decision and said it was one scenario that informed thinking about a reasonable worst-case scenario. More recent results from the Cambridge model point to a much lower daily death rate, bringing it in line with other models that suggest they could reach about 2,000 a day.

The Great Barrington declaration calls on governments to protect the most vulnerable and let the rest of society return to life as normal. The aim is to let the virus spread in the young and healthy who build up enough immunity that the epidemic grinds to a halt.

Whitty, however, said that with the vast majority of infectious diseases, herd immunity was never achieved naturally, and that it was “simply impractical” to believe vulnerable people in the community, care homes, hospitals and elsewhere could be shielded.

Another concern, he said, was that the strategy assumed that “very large numbers of people would inevitably die” unless all vulnerable people could be identified and isolated perfectly for several years. “Other than that, it no doubt has some merits,” he said.

Vallance agreed with the assessment and said Sage, the government’s expert committee, had reviewed the Great Barrington proposal and found “fatal flaws in the argument”.