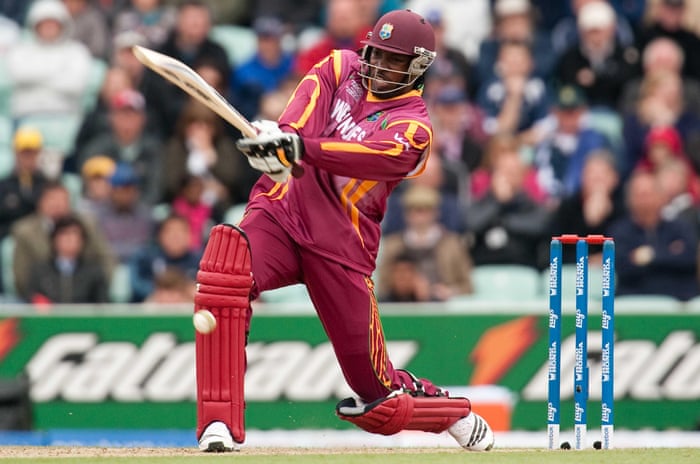 And now for something completely different. The Rajasthan Royals played the Kings XI Punjab in Abu Dhabi last Friday, and while they were at it Chris Gayle hit his 1,000th six in T20 cricket. He did it with a slightly manic pull shot over midwicket, off a 19-year-old kid called Kartik Tyagi. This is Tyagi’s first season in the IPL, so he didn’t know better than to try bowling a chest-high bouncer when Gayle was 85 not out at the death. In the end, Jofra Archer got Gayle for 99 in the next over, bowled with a leg-stump yorker. Gayle was so angry about it that he tossed his bat away to square leg, then regained his cool, and congratulated Archer by slapping his hand as he walked off.

Gayle has scored more runs in sixes alone than the vast majority of players make any way in their entire T20 careers. Really. There are only 36 other batsmen who’ve made more than 6,000 T20 runs. Gayle is so far ahead that you have to start measuring him against entire countries. He hasn’t just hit more sixes than any player, he’s hit more sixes than any international team, more than Australia have managed in 968 international T20 innings, more than all the 152 players who’ve taken strike for Bangladesh and Sri Lanka have between the lot of them in 15 years of international T20 cricket.

He’s a one-man superpower, the Jeff Bezos of boundary hitting. He’s hit sixes for 26 teams in 13 different leagues across eight different countries and five continents, has broken the records for most sixes in the Indian Premier League, the Caribbean Premier League, and the Bangladesh Premier League. So long as Gayle’s playing, it’s always six o’clock somewhere in the world.

Given that Gayle also holds the record for hitting the most sixes in all forms of international cricket (534 in Test matches, one-day matches, and T20s for the West Indies), it’s just possible that he’s hit more sixes than anyone else in the history of the game, that he is, in fact, the sixiest cricketer who ever lived. Since we don’t have records for first class and List A cricket, it’s impossible to say for sure. But T20 has been played in an era when each and every ball’s recorded, which means that we can list all of Gayle’s sixes, from the very first, a lofted on-drive off George O’Brien for Jamaica against Bermuda in the Stanford 20/20 in 2006, to his 1,001st, a swat over the leg-side off a full toss from the ball before Archer got him out last Friday.

My favourites were the three he took off Brett Lee at the Oval during the World T20 back in 2009, one pulled out of the ground and over the road into the Archbishop Tenison’s school, another on to the top of the Bedser Stand, a third into the stands at midwicket. Lee got him in the end, for 88 off 50 balls, but his four overs cost 56 runs, and West Indies won by seven wickets. They were shots that shook the game. It was one of those moments when the sport seemed to take a sudden leap forward in the space of a single, short spell of play, a breathtakingly exciting contest between one of the world’s best, and fastest, bowlers, and its most destructive batsmen. Those six deliveries gave a glimpse of the unimagined potential of the format.

That was more than a decade ago now, ancient lore in a game that moves on so quickly. Gayle is 41 now, and has grey streaks in his beard. He’s a liability in the field, and sometimes he even seems like a burden on his batting partners because he turns down so many singles. But, whatever else they tell you, there’s enough of the old magic there. Kings XI were bottom of the table this season, till they brought him in to bat at No 3, then they won five in a row.

Still, he’s at the point where he’s fending off questions about his retirement plans. And his fans hang on his tweets, wondering if they ought to read more into them than is really there. Just this week there was a flurry of stories asking whether he was going to quit because he sent one telling people to keep watching the IPL “even though my season has come to an end”. However he finishes, it surely won’t be anything like so prosaic as that.