Heiko Mass urged restraint from both Donald Trump and his Democrat rival Joe Biden until the full results were known in the election. He said: “America is more than a one-man show. Anyone who continues to pour oil on the fire in a situation like this is acting irresponsibly. Now is the time to keep a cool head until an independently determined result is available.”

Counting continues in the US today with the final absentee votes being opened.

Last night Donald Trump said “they are trying to steal the election”, claiming voter fraud, but showing no evidence to back up his allegations.

Mr Maas added: “In order for the result – which has not yet been determined – to be accepted, everyone must first show restraint.

“Decent losers are more important for the functioning of a democracy than radiant winners.

“With such narrow majorities, it is very easy to find yourself on the losing side.

“This shows how important it is to work to bridge the political divide.” 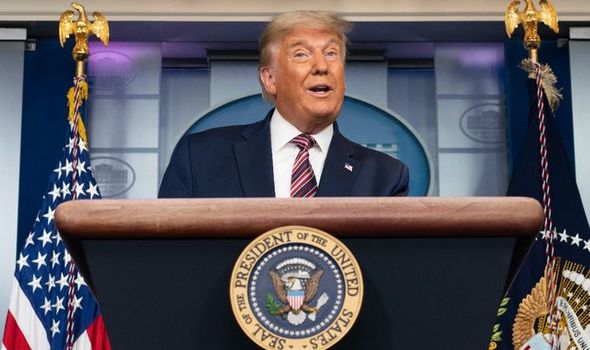 Maas said he expected that once the election result is settled, “the USA will probably not return to the international stage with full energy for the time being”.

He added: “The world needs the USA as a force for order, not as a factor of chaos.”

Joe Biden took the lead in Georgia in the early hours of this morning after more postal votes were counted, making it appear more likely the Democrats would snatch the seat from the Republicans.

That win puts Biden at 269 electoral college votes – just one away from the crucial 270 needed to be declared the winner of the US Presidential election.

Trump supporters began protesting outside some counting centres in key seats, with a man arrested on suspicion of plotting to carry out an attack outside a venue in Pennsylvania.

Police also seized a weapon near the Pennsylvania Convention Center in Philadelphia. No injuries were reported.

Donald Trump clinched an early lead in the state, but absentee ballots, largely used by Democrats, have eroded his lead.

In a press conference on Wednesday night he said: “If you count the legal votes I easily win.

With the future of the presidency in the balance, restive encounters also unfolded in New York and Washington as well as swing-state cities such as Milwaukee, Wisconsin; Las Vegas, Nevada; Detroit, Michigan; and Atlanta, Georgia.

In Phoenix, Trump supporters briefly chased a man who held up a sign depicting the president as a Nazi pig behind a stage where right-wing conspiracy theorist Alex Jones was speaking.

Police intervened and broke up the altercation after the man and his small group of counterdemonstrators were surrounded by Trump activists.

“They are trying to steal the election but America knows what happened and it’s fighting back,” Jones told the throng of some 300 people.

Chris Cox of Bikers for Trump said: “I think voter fraud is systemic. I didn’t work five and a half years (for Trump) to sit home now.”

In Milwaukee, some 50 Trump supporters gathered for a “Stop the Steal” rally in front of a city building where votes were being counted, blasting country music, waving flags and carrying signs reading “Recount” and “Rigged”.