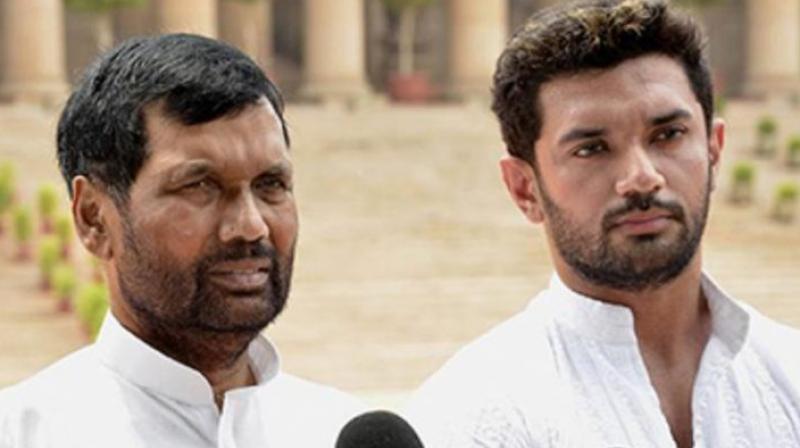 Patna: The Hindustani Awam Morcha (HAM), an ally of the BJP led NDA has raised the political pitch in Bihar by demanding a judicial probe into the death of veteran Dalit leader Ram Vilas Paswan.

On Monday, HAM spokesperson Danish Rizwan wrote a letter to Prime Minister Narendra Modi seeking a judicial probe into the case. He has alleged that “day after Ram Vilas Paswan's final rites, Chirag Paswan was seen smiling and happily participating in a shooting. This has raised doubts among his supporters”.

The party also asked why hospital authorities never released Ram Vilas Paswan’s medical bulletin and why only three people were allowed to meet him at the hospital.

When contacted for his comments on the issue, Jitan Ram Manjhi clarified that demands for a judicial probe were being made after people started raising questions regarding the death of Ram Vilas Paswan.

“My party has demanded a probe into the death of Ram Vilas Paswan after his supporters started raising questions. Even I was told that he had passed away two or three days before the official announcement was made. The people also want to know why the hospital never released any medical bulletin. Questions are being raised because Ram Vilas Paswan was a big leader”, Former Bihar CM and HAM Chief Jitan Ram Manjhi said.

Immediately after Ram Vilas Paswan’s death on October 8, Jitan Ram Manjhi had demanded Bharat Ratna for him. He had also urged the government to convert his official bungalow in New Delhi into a memorial.

However, these allegations and were later dismissed by Chirag Paswan. While launching a stinging attack on HAM leaders, he said that “people who are raising such questions should first answer why they did not show any concern for his father when he was unwell. Everyone is playing politics over a person who has passed away. Mr. Manjhi was aware of my father’s condition yet he never made any effort to visit him when he was in the hospital”.

Ram Vilas Paswan, who was the founder of the Lok Janshakti Party (LJP) and Union Minister passed away on October 8 at a hospital in Delhi a few days after his heart surgery.

The controversy regarding Dalit leader Ram Vilas Paswan’s death comes a day before elections for the second phase of polls are to be held in Bihar.

LJP Chief Paswan who pulled out of the NDA citing ideological differences with Chief Minister Nitish Kumar has emerged as the third force in Bihar. He is contesting on 143 out of 243 seats in the ongoing assembly elections.