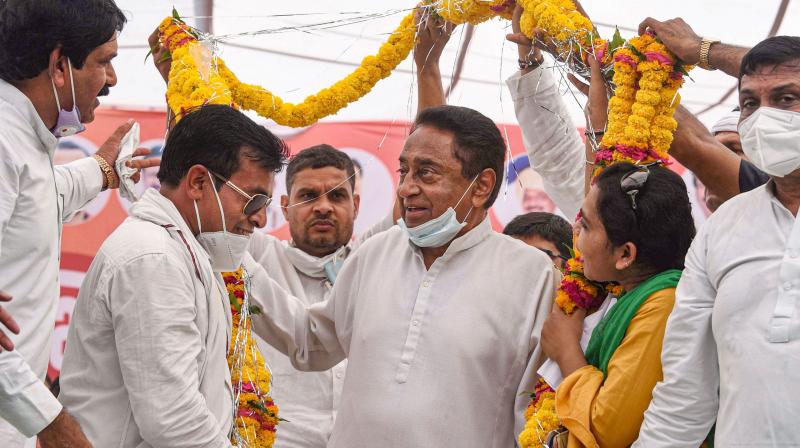 New Delhi: The Supreme Court Monday stayed the Election Commission order which revoked the "star campaigner" status of former Madhya Pradesh Chief Minister Kamal Nath for model code violation during the campaign for bypolls in 28 assembly constituencies in the state.

The counsel appearing for the poll panel told a bench headed by Chief Justice S A Bobde that Nath's plea has become infructuous as the campaigning has ended and the voting is to take place on Tuesday.

We are staying it, said the bench, also comprising Justices A S Bopanna and V Ramasubramanian.

The apex court was hearing Nath's plea challenging the October 30 order of the EC revoking his star campaigner status.

While a political party pays for the expenditure of its star campaigner, the candidate concerned bears the expense of other campaigners.

The top court also issued notice to the EC seeking its response on Nath's plea.

Issue notice. Until further orders, there shall be a stay of order dated October 30, 2020 issued by Respondent No.1  Election Commission of India, the bench said in its order.

Besides seeking quashing of the EC order, the senior Congress leader has also sought framing of appropriate guidelines for speeches during campaigning by star campaigners or campaigners, "keeping in mind the right to freedom of speech and expression and concept of democratic elections".

During the hearing conducted through video-conferencing on Monday, senior advocate Rakesh Dwivedi, appearing for the EC, told the bench, This is infructuous as campaigning has ended. Voting is tomorrow.

Senior advocate Kapil Sibal, who along with senior counsel Vivek Tankha appeared for Nath, said the matter has not become infructuous and the EC had not issued any notice to the former chief minister before passing the October 30 order.

How can you determine who is their leader? It's their power not EC's power, the bench asked EC's counsel.

Dwivedi said, We have acted under the model code of conduct and moreover, now the matter is infructuous.

It does not matter whether the matter is infructuous or not. We will determine that from where do you get power, the bench said.

When Dwivedi said if the court is to determine this aspect then EC's order should not be stayed, the bench said, No, we are staying it.

Nath, who is currently the president of Madhya Pradesh Congress Committee, has said in his plea that the EC has passed the order without any notice or hearing him based on a complaint by the BJP against a speech delivered on October 13.

"It is submitted that the impugned order (of EC) is illegal, arbitrary, unreasoned, passed in complete violation of basic canons of natural justice and in negation of fair play and therefore, deserves to be quashed.

"Further, no notice has been issued to the petitioner (Nath) with regard to the impugned order in complete violation of principles of natural injustice," said the plea, filed through advocate-on-record Varun Chopra.

In his plea, Nath said that EC has passed the October 30 order and has revoked his name from the list of 'star campaigners' of the Indian National Congress on the ground of repeated violation of model code of conduct (MCC) and advisories of the poll panel.

The plea has said that MCC has been in force for 12 districts of Madhya Pradesh since September 29 when the schedule for by-elections to 28 seats in the state legislative assembly, which are to be held on November 3, was announced by the EC.

The former Union minister and nine-time Member of Parliament further claimed that leaders of the BJP have been "repeatedly making statements ex-facie in violation of the model code during campaigning for the by-elections.

It is reiterated that despite use of such language in public view and blatant violation of the Model Code of Conduct, the Respondent No.1 (EC) has not taken any such action against any leaders of BJP or the party itself for allowing its leaders to repeatedly violate provisions of MCC, it has said.

The plea has also raised several questions of law of public importance, including whether the fundamental right of freedom of speech and expression guaranteed to Nath has been abrogated by the EC.

In the order, the poll panel had said, "…for repeated violation of Model Code of Conduct and for completely disregarding the advisory issued to him, the Commission hereby revokes the status of leader of political party (Star Campaigner) of Kamal Nath, Ex-Chief Minister, Madhya Pradesh, with immediate effect for the current Bye-elections of Legislative Assembly of Madhya Pradesh."

He had used the words "mafia" and "milawat khor" against a political rival at a recent campaigning event.

Last week, the EC had asked Nath not to use words like "item" in campaigning.

He had used the jibe to hit out at state minister and BJP candidate Imarti Devi at a rally.

Trump’s final fight is with democracy itself