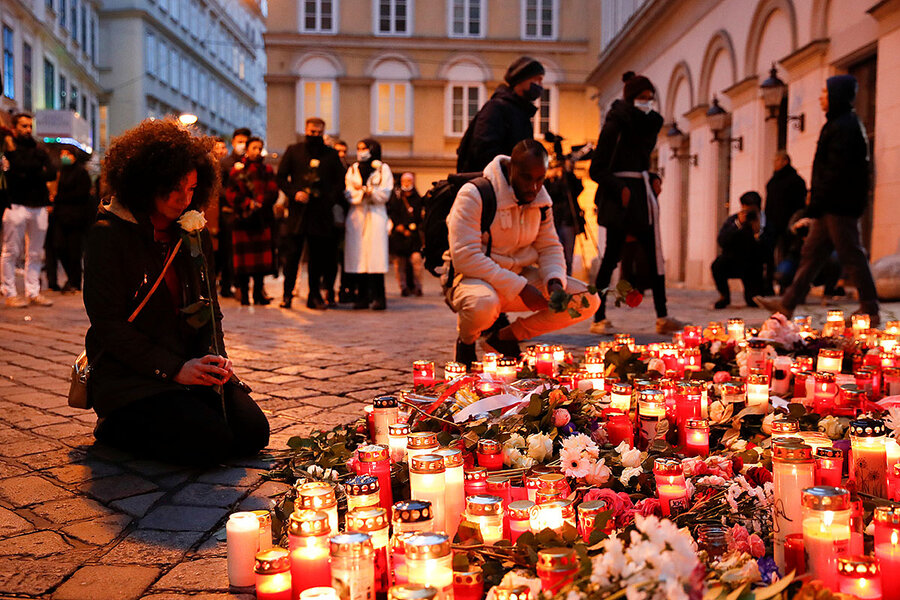 To Vienna resident Julia Schrammel, her beloved hometown felt like a bubble of peace and security. Until Monday night, that is, as Europe’s third terror attack in three weeks brought gunfire to the city center as she dined with friends.

The shooter – who killed four people before being shot dead by police – had tried to travel to Syria to join the Islamic State (ISIS) a few years ago. But he was arrested and given a prison sentence in Austria that was cut short. Holed up in her apartment later, Ms. Schrammel reflected upon his early release.

“I think the public would have wished this person had stayed under arrest,” says Ms. Schrammel, who is a master’s student in international management. “I understand it’s really hard if someone’s convincing authorities that they’re no longer [radicalized]. Still, it’s important to understand this is about extremes and not about Muslims overall.”

This separation of terror from religion is a sentiment that has characterized Austrian society’s response. Chancellor Sebastian Kurz at first remarked the shooting shouldn’t be seen as a fight “between Christians and Muslims, or between Austrians and migrants,” before later taking a more divisive tone.

In France, on the other hand, last week’s knife attack in Nice and a beheading in a Parisian suburb on Oct. 16 weren’t met with such a fine line. French President Emmanuel Macron stoked controversy when he made remarks earlier last month that “Islam is a religion that is in crisis all over the world today” and outlined plans to counter what he called “Islamist separatism.”

Terror attacks in Europe are increasingly perpetrated by radicalized individuals, rather than being organized and supported by networks such as ISIS, experts say. That means Muslim communities are more vulnerable to discrimination as politicians and greater society rush to condemn terror attacks and their perpetrators.

“Fighting ‘Islamic terror’ is a catastrophic term,” says Daniela Pisoiu, a researcher on radicalization at the University of Vienna. “People all of a sudden slip into talking about Islam, and it’s a very slippery slope. I don’t think a terror attack can divide societies, but policy can.”

The reasons an individual might commit violence are incredibly complex, and there are no clear paths to radicalization, says Fiona de Londras, chair of global legal studies at the University of Birmingham in England. “There are a lot of assumptions in politics; one example is poverty. But we’re not entirely sure that’s the case. The push-and-pull factors are contextual.”

What’s clear, however, is that acts are increasingly perpetrated by lone wolf actors, which make them extremely difficult to detect and track. For example, the young man behind the Paris beheading, who was of Chechen origin but had spent most of his young life in France, was not previously known to authorities. Neither was the Tunisian man who authorities say killed three worshippers in a church in Nice last week. “Attacks are impossible to stop with a single individual and access to firearms … [or] everyday items such as a vehicle or knives,” says Steve Hewitt, a lecturer in security and intelligence at the University of Birmingham.

When perpetrators might be known to authorities, they can still slip through the cracks. The Vienna shooter had been in prison and should have been tracked after his release, says Dr. Pisoiu of the University of Vienna. “But they didn’t,” she says, remarking that the shooter had been evaluated and flagged as someone who “wasn’t over it.” “Everyone’s pushing [around] the blame. Now the Interior Ministry says, ‘Well, it’s not our fault because the guy was supposed to be deradicalized.’ The problem is that we don’t actually have a deradicalization program.”

A good program, she says, involves many institutions and aspects, from schooling to psychological support and employment programs. “Make sure the guy has a job, you know, make sure he doesn’t go back to his buddies, his community,” says Dr. Pisoiu.

The politics around terrorism

The rise of the far-right in European politics is adding an often toxic new element to the discussion around terror attacks. Far-right ideology can inflame Islamophobia, which risks triggering a broader societal backlash against Europe’s population of more than 26 million Muslims. That can fuel alienation within members of the Muslim community, which can in turn trigger those members’ radicalization, says Dr. Hewitt of the University of Birmingham.

“I also can’t help wondering if it’s about politics,” says Dr. Hewitt. French President Macron is facing reelection in 2022 and increasing pressure from the far-right. His comments about reforming Islam are likely meant to appeal to this right flank, but they also are “exacerbating divisions,” says Dr. Hewitt, which makes things “far worse in the long run.”

Politicians might feel it imperative to channel the “gravity” of a violent attack, says Dr. de Londras, but they must also “make sure nothing is incendiary.” “There’s a balance to achieve,” she says. “It’s arguable that President Macron has a tendency to respond in a way that fails to reflect on what the root causes of divisions are in France.”

Experts believe France and other European nations should avoid duplicating the United Kingdom’s controversial “Prevent” deradicalization program introduced in 2003, which led to the targeting and alienation of British Muslims.

“‘Prevent’ places a responsibility on all sorts of institutions, such as schools, health, etc., to report those they suspect as radicalized to authorities. The problem is that [the] communities identified are mostly Muslim and it creates a profile,” says Dr. Alex Christoyannopoulos, a politics and international relations lecturer at Loughborough University. “Some are suspected much quicker than others, maybe because they’re simply critical of foreign policy in the Middle East.”

If lone wolf attacks do continue and society doesn’t better grasp how to talk about them, backlash against Muslim communities in the U.K. and France could worsen, experts say.

“Society as a whole has a certain amount of responsibility; not the main responsibility, also not the first responsibility, but it has an effect on the process,” says Lamya Kaddor, a scholar of Islamic studies and teacher who introduced Islamic education into German public schools. “If I as a young person am constantly being pushed into a corner, constantly being pushed towards the edge of society, because my lifestyle isn’t German enough or isn’t considered normal, then this promotes radicalization.”

In the Vienna shootings, Austrian society reacted in a sensitive way that was encouraging, says Thomas Roithner, an expert on Austrian foreign affairs, security, and defense at the University of Vienna.

Take the media. “There wasn’t this reflexive response to research his background and religion,” says Mr. Roithner. Austrians were also discouraged from sharing self-shot videos of the shootings, and media interviewed bystanders to ask why they felt compelled to help. Politicians also mostly talked of unity.

“Politicians didn’t start talking about shutting people out or dividing [out] people who were born in Austria or not born in Austria and now live here,” says Mr. Roithner. “It hasn’t always been like that in the past. This is an important sign that civilians sent to politicians, that they don’t want to see people divided right now.”