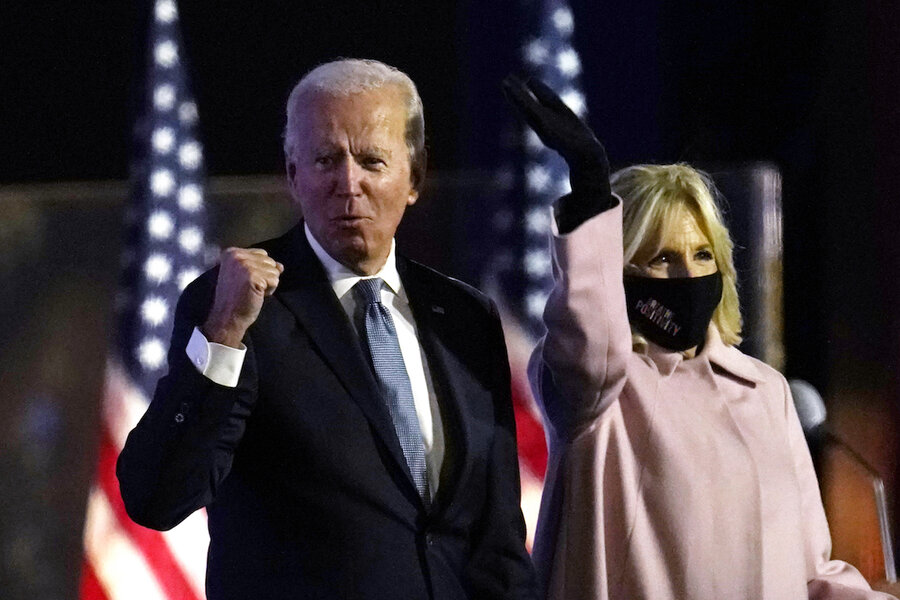 The fate of the United States presidency hung in the balance Wednesday as Democratic challenger Joe Biden picked up a win in Wisconsin while fighting President Donald Trump in other battleground states that could prove crucial in determining who wins the White House.

Neither candidate cleared the 270 Electoral College votes needed to win the White House, and the margins were tight in several other battleground states. Top advisers for both Mr. Biden and Mr. Trump on Wednesday morning expressed confidence that they respectively had the likelier path to victory in the outstanding states.

The AP called Wisconsin for Mr. Biden after election officials in the state said all outstanding ballots had been counted, save for a few hundred in one township and an expected small number of provisional ballots.

It was unclear when or how quickly a national winner could be determined. The latest vote counts in Michigan gave Mr. Biden a small lead, but it was still too early to call the race.

Trump campaign manager Bill Stepien said the president would formally request a Wisconsin recount, citing “irregularities in several Wisconsin counties,” and the campaign filed suit in Michigan to halt counting of ballots because it contended it wasn’t given “meaningful access” to observe the opening of ballots and the counting process.

At the same time, hundreds of thousands of votes were still to be counted in Pennsylvania.

The margins were exceedingly tight in states across the country, with the candidates trading wins in battlegrounds. Mr. Trump picked up Florida, the largest of the swing states, while Mr. Biden flipped Arizona, a state that has reliably voted Republican in recent elections. But some Trump supporters say the president could still take the state. With 84 percent of the votes counted at 3 p.m. Wednesday, Biden has a lead of 94,000 votes in Arizona.

The unsettled presidential race came after Democrats entered election night confident not only in Mr. Biden’s prospects, but also in the party’s chances of taking control of the Senate. But the GOP held several seats that were considered vulnerable, including in Iowa, Texas, Maine, and Kansas. Disappointed Democrats lost House seats but were expected to retain control there.

The high-stakes election was held against the backdrop of a historic pandemic that has killed more than 232,000 Americans and wiped away millions of jobs. Both candidates spent months pressing dramatically different visions for the nation’s future, including on racial justice, and voters responded in huge numbers, with more than 100 million people casting votes ahead of Election Day.

Mr. Trump, in an extraordinary move from the White House, issued premature claims of victory and said he would take the election to the Supreme Court to stop the counting. It was unclear exactly what legal action he could try to pursue.

Senate Majority Leader Mitch McConnell discounted the president’s quick claim of victory, saying it would take a while for states to conduct their vote counts. The Kentucky Republican said Wednesday that “claiming you’ve won the election is different from finishing the counting.”

The president stayed out of the public eye but took to Twitter to suggest, without basis, that the election was being tainted by late-counted ballots. Twitter flagged a number of Mr. Trump’s tweets, noting some of the information shared was “disputed and might be misleading about an election or other civic process.”

Mr. Biden, briefly appearing in front of supporters in Delaware, urged patience, saying the election “ain’t over until every vote is counted, every ballot is counted.”

“It’s not my place or Donald Trump’s place to declare who’s won this election,” Mr. Biden said. “That’s the decision of the American people.”

Vote tabulations routinely continue beyond Election Day, and states largely set the rules for when the count has to end. In presidential elections, a key point is the date in December when presidential electors met. That’s set by federal law.

Several states allow mailed-in votes to be accepted after Election Day, as long as they were postmarked by Tuesday. That includes Pennsylvania, where ballots postmarked by Nov. 3 can be accepted if they arrive up to three days after the election.

Pennsylvania Gov. Tom Wolf said he had “promised Pennsylvanians that we would count every vote and that’s what we’re going to do.”

Mr. Trump appeared to suggest those ballots should not be counted, and that he would fight for that outcome at the high court. But legal experts were dubious of Mr. Trump’s declaration. Mr. Trump has appointed three of the high court’s nine justices including, most recently, Amy Coney Barrett.

The Trump campaign on Wednesday pushed Republican donors to dig deeper into their pockets to help finance legal challenges. Republican National Committee Chairwoman Ronna McDaniel, during a donor call, spoke plainly: “The fight’s not over. We’re in it.” Mr. Biden’s running mate, Sen. Kamala Harris, made a pitch on Twitter to supporters to pitch in $5 to help pay for a fight that could “stretch on for weeks.”

Democrats typically outperform Republicans in mail voting, while the GOP looks to make up ground in Election Day turnout. That means the early margins between the candidates could be influenced by which type of votes – early or Election Day – were being reported by the states.

Throughout the campaign, Mr. Trump cast doubt about the integrity of the election and repeatedly suggested that mail-in ballots should not be counted. Both campaigns had teams of lawyers at the ready to move into battleground states if there were legal challenges.

Mr. Trump kept several states, including Texas, Iowa, and Ohio, where Mr. Biden had made a strong play in the final stages of the campaign. But Mr. Biden picked off states where Mr. Trump sought to compete, including New Hampshire and Minnesota. But Florida was the biggest, most fiercely contested battleground on the map, with both campaigns battling over the 29 Electoral College votes that went to Mr. Trump.

The president adopted Florida as his new home state, wooed its Latino community, particularly Cuban-Americans, and held rallies there incessantly. For his part, Mr. Biden deployed his top surrogate – former President Barack Obama – there twice in the campaign’s closing days and benefitted from a $100 million pledge in the state from Michael Bloomberg.

The momentum from early voting carried into Election Day, as an energized electorate produced long lines at polling sites throughout the country. Turnout was higher than in 2016 in numerous counties, including all of Florida, nearly every county in North Carolina and more than 100 counties in both Georgia and Texas. That tally seemed sure to increase as more counties reported their turnout figures.

Voters braved worries of the coronavirus, threats of polling place intimidation, and expectations of long lines caused by changes to voting systems, but appeared undeterred as turnout appeared it would easily surpass the 139 million ballots cast four years ago.

On Wednesday, some awoke to fresh anxiety about an election undecided and what could be ahead.

“Honestly I’m just more concerned about what’s gonna happen after we find out,” said Deion Flan, a voter in Atlanta. “I just want everything to just go back to the American way. It’s the tension of what could happen, what may happen, what’s going to happen after.”