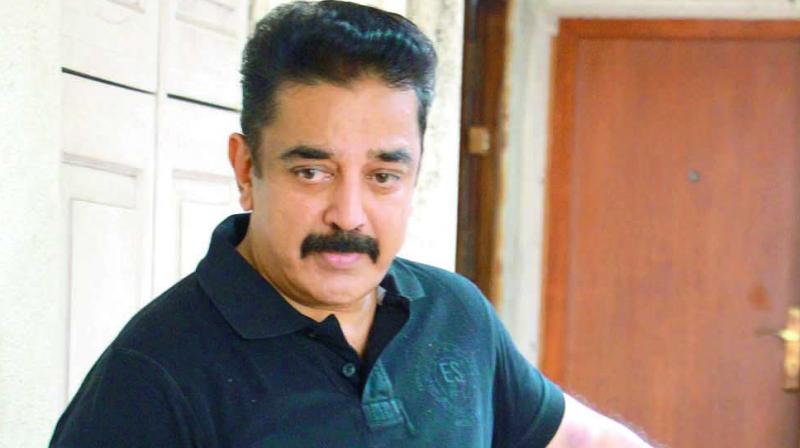 Chennai: Actor Kamal Haasan made it clear on Monday that his party, Makkal Needhi Maiyam (MNM), would not have ties with any of the Dravidian parties for the coming Assembly elections in 2021.

Hailed as ‘Future Chief Minister’ even as he arrived to address the party’s district secretaries at a hotel in Chennai, Haasan said the meeting was called to firm up the preparations for the elections, which had already begun.

Party functionaries, who adhered to all Covid-19 safety norms like social distancing and wearing of other gear at the meeting venue, insisted that the party’s Chief Ministerial candidate contested the election himself. They suggested that he faced the polls from his hometown of Paramakudi.

However, no decision was taken as Monday’s meeting was the first of the three phase discussions that the party had charted out with a view to avoiding crowding in the hall. Only election in-charges of 100 constituencies and 17 district secretaries were present.

The rest of the functionaries, including district secretaries, would attend the second phase on Tuesday and the third phase the next day. Some top leaders of the party like vice president Mahendran, general secretary A G Mourya and youth wing secretary Snehan were present at the meeting.

Talking about having alliances with other parties, he said that he did not mind the party being not part of a coalition. It would contest the elections alone rather than joining hands with the Dravidian parties. All decisions relating to candidates and alliance would be taken at the right time, it was told.

According to insiders in the party, the functionaries were in an upbeat mood as they felt that actor Rajinikanth backing out of politics would only help Haasan. They also expect Rajinikanth to support his friend in the film industry, thus increasing MNMs’ vote tally.

Haasan’s declaration that he would have nothing to do with the Dravidian parties is also said to be keeping with a perceptible mood in the social media, where people were seemingly looking for a ‘change.’ It was evident in the manner in which Rajinikanth was exhorted to enter politics in the last few days. Hassan perhaps wants to capitalise on that.

Photograph of CRPF commando captured by Maoists one year old; could be ploy

Buttigieg on Biden’s infrastructure plan: Americans ‘want to see us get it done’