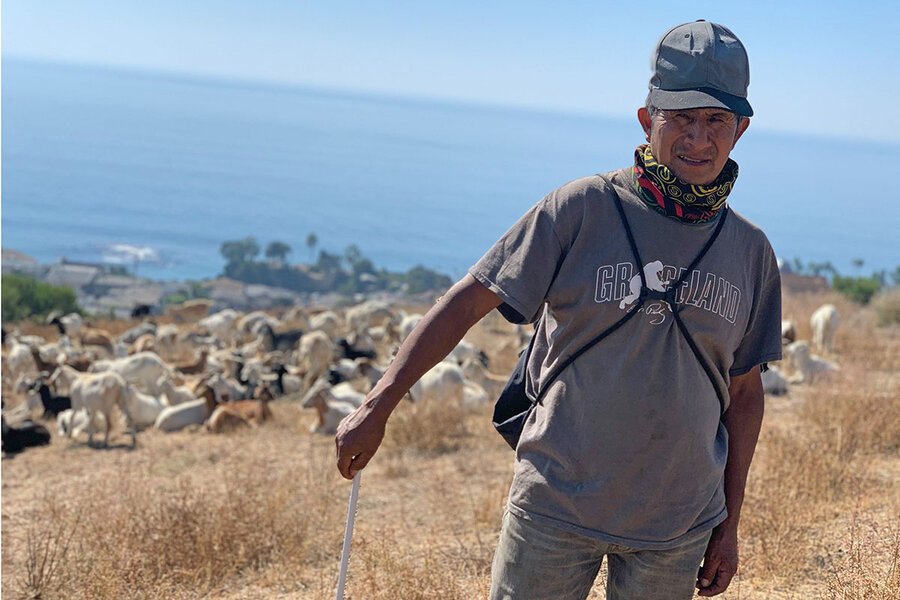 When the balmy breezes off the Pacific turn tail before the hot Santa Ana winds that bring conditions for wildfires, Agotilio Moreno’s 300 goats become very serious – but cute – talismans of hope.

Murmurs of dread floated through this old art colony recently when the Silverado wildfire erupted 20 miles away, on the other side of the 900-foot-high wilderness area that isolates the 6-mile-long beach town from the rest of Orange County. But Mr. Moreno’s goats dotting the steep hillsides here are a cheerful part of fire defense that officials and residents take seriously: “fuel reduction” –  also known as voracious grazing with nimble lips and grinding teeth.

The goats have been working nearly 24 hours a day since March, clearing 90% of the biomass wherever Mr. Moreno pens them with portable electric fencing. While the goats are aimed at grasses – wildfire kindling that combusts fast and furiously –  misfires happen. They particularly love flowers, and have been known to break bonds and feast on a homeowner’s expensive landscaping.

If anything has proven helpful in fending off fires, says city Fire Marshal James Brown, goats are an important tool in fire prevention here. “When a wildland fire hits, [goat fuel reduction] can be the difference between a neighborhood surviving or not, or [firefighters’] ability to get in or not get in.”

Wildfires can spark unusual alarm because of their unpredictability and uncontrollable power. So when something as simple as a lone goatherd and his flock can eliminate what stokes those fires, it feels somehow right.

After the legendary 1993 wildfire here 27 years ago last week, says Mr. Brown, it was not lost on observers that in the area where a small herd of goats had been located, no adjacent homes were lost; but 400 homes were leveled in other areas untreated by goats.

To place a value on what the goats can do, he says half-jokingly, would be to peruse Zillow for the total value of homes in Laguna Beach – a notoriously high-price real-estate market – that have not burned down. And that, he adds, isn’t even to mention the emotional toll exacted from the residents who didn’t lose homes, but who had to flee barefoot and empty-handed.

The city spends about $250,000 a year for Mr. Moreno – a contractor from a large Basque-run sheep-and-goat ranch in Riverside – to herd his goats over about 250 acres of open land. “Pound for pound, it’s hard to beat the goats,” Mr. Brown says, noting that human brush-clearing and grass-clearing, which is not as thorough, costs the city $1 million annually.

Mr. Brown speaks the language of fire science – BTUs and flame length and geology and topography. Certain grasses are “flashy,” he says, and can “pyrolyze a burn in half a second.” In other words, it explodes; and creates flame lengths of 30 to 80 feet – the kind that can shoot out horizontally and consume a car in an instant. These grasses and mustard plants that can grow 10 feet tall in the hills here are what he hires Mr. Moreno and his goats to eliminate in areas next to homes.

Mr. Moreno, on the other hand, speaks in the calculus of experience herding in the Peruvian Andes province of Huancayo. He says he can gauge the “softness” of dirt and how unstable a hill is before cloven hooves and munching can disrupt it enough to create bare spots that could erode, or, worse, slide. He knows how steep a hill a goat can handle before taking a tumble over a precipice.

The goatherd has lived a humble existence away from his wife and three now-adult and college-educated daughters for 21 years. He nomadically moves his trailer around the edges of neighborhoods, parking alongside homes with soaring multimillion dollar views of the ocean and canyons. And yet, while he says he savors this place, with the sounds of the ocean waves that echo up into the hills and the smell of wild sage and rosemary, he adds with palpable melancholy that he doesn’t really know anyone here.

But, ironically, he is known. Particularly now, in the pandemic that has driven everyone to outdoor extremes, hundreds of passing mountain bikers, soccer dads in Teslas taking canyon bends at high speed, power-walking moms, and nature-exploring school kids, can identify him and what he does to defend their community.