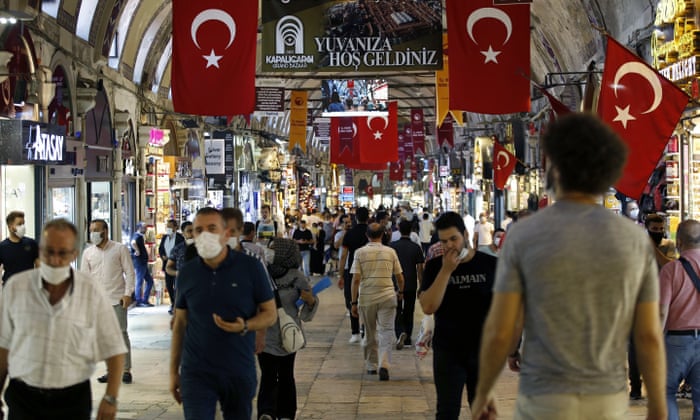 The Turkish president, Recep Tayyip Erdoğan, has removed the governor of the country’s central bank from his post after the lira currency hit record lows, having lost 30% of its value since the start of the year.

The decision to replace Murat Uysal as governor was made by presidential decree and announced in the country’s official gazette early on Saturday. It was not immediately clear why Uysal was removed.

The lira closed at 8.544 against the US dollar on Friday after a touching record low of 8.58, despite dollar weakness as votes were still being counted in the US election.

Erdoğan had appointed then-deputy governor Uysal to head the central bank in July 2019 when he sacked his predecessor, Murat Çetinkaya, amid the president’s frustration that the bank had not cut interest rates to boost the economy.

Erdoğan, a self-described enemy of high interest rates, has repeatedly called for lower borrowing costs. Last weekend, he said Turkey was fighting an economic war against those squeezing it in “the devil’s triangle of interest and exchange rates and inflation”.

However, Turkey was at risk of a full-blown currency crisis such as the one it suffered in 2018 unless the central bank adopted tighter monetary policy, Capital Economics warned this week.

#BREAKING: The war-of-words between #French President @EmmanuelMacron and @RTErdogan continues, and so does the #TurkIsh lira’s troubles. The #lira is toast. Headed for 9 to the USD. This will keep fueling #inflation. Today, I measure it at 48.49%/yr. pic.twitter.com/QbpKZ2JD9H

“We are becoming increasingly concerned that Turkey’s central bank will not deliver the monetary tightening required to shore up investor confidence.”

Naci Ağbal, an Erdoğan ally who served as finance minister from 2015 until 2018, will be the new governor but it was not clear if he would be prepared to raise rates.

Turkey’s Milliyet newspaper reported on Thursday that finance minister Berat Albayrak had ruled out intervening to support the lira, reiterating government concerns that raising interest rates could hurt the economy.

At the last meeting of its monetary policy committee on 22 October, the central bank bucked expectations for a big interest rate hike and held its policy rate steady at 10.25%, triggering sharp losses in the lira.

The bank, which also surprised markets a month earlier when it hiked rates, said it would continue with liquidity measures to tighten money supply. It raised the uppermost rate in its corridor, the late liquidity window, to 14.75% from 13.25%.

However, the lira has continued to slide despite those measures, weakening 30% against the US currency this year to become the worst performer in emerging markets.

Bearishness towards the lira stems from concerns about possible Western sanctions against Turkey, depleted reserves, high inflation and political interference in monetary policy.

Analysts are concerned that Turkey’s ties could suffer if Democrat Joe Biden becomes US president.