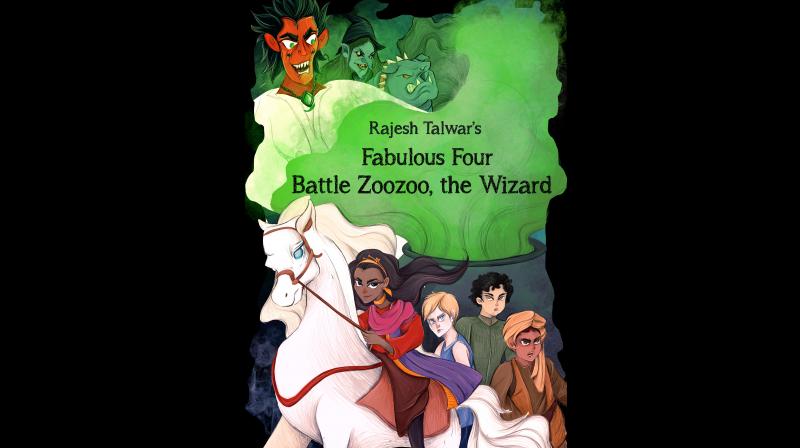 In a country with not enough literature for kids, The Fabulous Four brings a new, exciting adventure full of eastern story-telling magic.

Written by lawyer and noted screenplay writer and author of several books, Rajesh Talwar, the story is about an evil wizard, Zoozoo, who kidnaps Princess Samara’s parents, the king and queen of Nonamia. The princess journeys to the far corners of the world, where she meets and befriends three youngsters who help her to plan and carry out a mission to rescue her parents.In Wetlands, Princess Samara meets Raja, who can balance a candle on his head while swimming. In Hotlands, she meets Nandu, who can walk through a hot wind without any difficulty. In Snowlands, she meets Prince, the Snow Baby, who can walk through freezing temperatures in little more than a T-shirt. With the help of Khabar, a magical bird, and Barado, the fastest horse in the world, the four children undertake the fearsome task of challenging Zoozoo, his army headed by General Zombo and the evil witch the Churail.

Theme of the book

One interesting thing about the four children in the story is that they all look very different from each other. “Just as do humans on this planet of ours, who belong to different races,” adds Rajesh. “On the one hand, you have the princess whose skin is as dark as the night sky, and on the other hand, you have Prince from Snowlands who is as fair or white as any European. There is a strong underlying theme of racial unity in the story,” says the author of the popular satire on the law criminalising homosexuality, Inside Gayland.

The common humanity of different races is something that has always interested Rajesh. “The theme of racial unity has been close to my heart ever since I joined the United Nations in 2000. My first posting was to the newly established but war-torn country, Kosovo, which was born from the breakup of the former Yugoslavia. The UN Mission in Kosovo, or UNMIK as it is called, had a large international policing force, comprising a large number of Indians, Bangladeshis and Africans amongst other nationalities. The Kosovars are Albanians who are very fair and look completely European, yet it was the black- and brown-coloured international civilian police running the show in the interim. This fascinated me! At the end of the day, I could see, we were all the same. As Michael Jackson sang famously, ‘It don’t matter, baby, if you’re black or white!’”

With friends across different countries and races, Rajesh knew some of their children very well and grew fond of many of them. “But it always felt a shame that they were reading Western-dominated children’s adventures such as The Secret Seven and The Famous Five,” says Rajesh.

Then pointing out that he didn’t think there was anything wrong with those books and that they are wonderful, he asserts that it is indeed fine for kids to read those books. “But it often crossed my mind that we could have a children’s adventure book that featured characters from all the major races. This remained an idea till a few years ago when I was reading a book by Tagore and he spoke of how the problems of India today were the problems of the world tomorrow — how India was, in a sense, a microcosm of the world. I suddenly realised that I could and should write a children’s book that had characters from different parts of India, who could also simultaneously represent the different races in our planet.”

“I have written books, especially plays, where I have everything plotted out in advance after which is when I start the actual process of writing. In the case of The Fabulous Four, though, I wrote in the inspirational mode, so to speak, not knowing where the story would take me,” says the author.

Some of the other children’s books Rajesh has written include The Bearded Prince and The Three Greens (by Orient BlackSwan) and The Sleepless Beauty. He has also penned two fictions — namely, An Afghan Winter and The Sentimental Terrorist: A Novel of Afghanistan (both published by CreateSpace Independent Publishing Platform) — as well as non-fiction, including the bestselling Courting Injustice: The Nirbhaya Case and Its Aftermath (by Hay House Publishing), The Judiciary on Trial (by Cosmos Publication) and The Third Sex and Human Rights.

Rajesh’s rich body of work ranges from social justice and culture to law. His more recent plays include Kaash Kashmir, which examines the conflict in the valley and Gandhi, Ambedkar and the Four-Legged Scorpion: A Play on Untouchability, a historical play on Gandhi and Ambedkar.