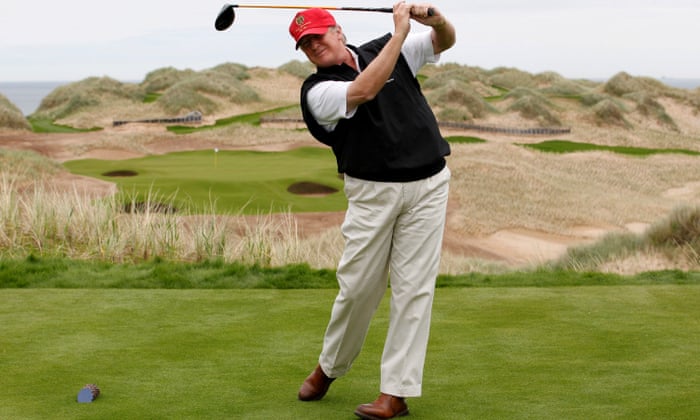 Donald’s Trump’s boast about winning 18 club championships is a lie that’s so over-the-top Crazytown it loses all credibility among golfers the second it’s out of his mouth. To double check, I called the only guy who could come close: George “Buddy” Marucci, of Philadelphia. Like Trump, Marucci belongs to more clubs than you can fit in your bag. Like Trump, he’s in the right age bracket, at six years younger than Trump. Like Trump, he’s got all the money he needs to play as many club championships as he can fly to. Unlike Trump, he’s as fine a golfing businessman as you can find. Marucci took 19-year-old Tiger Woods – 24 years his junior – to the last hole of the 1995 US Amateur before finally losing.

So, Buddy Marucci, do YOU have 18 club championships?

“Ha!” he laughed. “No way. I have a few, but nowhere near that many. It’s hard to win a club championship. I might have eight. Tops.”

This is a guy who’s been breaking par for the past 45 years. He belongs to nearly every creamy course in the world – Winged Foot, Seminole, Pine Valley, Cypress Point. If it’s on a top 10 in the world list, Marucci probably has a locker there.

When Trump told Gary Player he’d won 18 championships, Player scoffed. “I told him that if anyone beats him, he kicks them out. So, he had to win.”

Trump International in West Palm Beach, Florida, has a plaque on the wall that lists all the men who’ve won the men’s club championship. Trump appears three times: 1999, 2001, and 2009. But hold on. The course wasn’t even open in 1999. Turns out, then White House spokesperson Hope Hicks admitted to the Washington Post, Trump played in a “soft opening” round on 1 November of that year with “a group of the early members,” and declared it the club championship.

On 17 March 17 2013, Trump tweeted he’d won the club championship again at Trump International. But the plaque for that year lists the winner as “Tom Roush.” The catch? It wasn’t really the club championship at all. Trump won the “Super Seniors Club Championship,” which at most clubs is reserved for players 60 and older. Something to be proud of, sure, but not within a Super Walmart of beating the best young players in the club. The difference between “Club Champion” and “Super Senior Club Champion” is the difference between Vanna White and Betty White.

“I remember Melania used to ask us ‘What is this ‘Super Seniors’?’” recalls former Trump Westchester exec Ian Gillule. “And Mr Trump would say, ‘Oh, Super Seniors is better than just a regular club championship, honey.’ He was saying it tongue in cheek but she didn’t know the difference.” 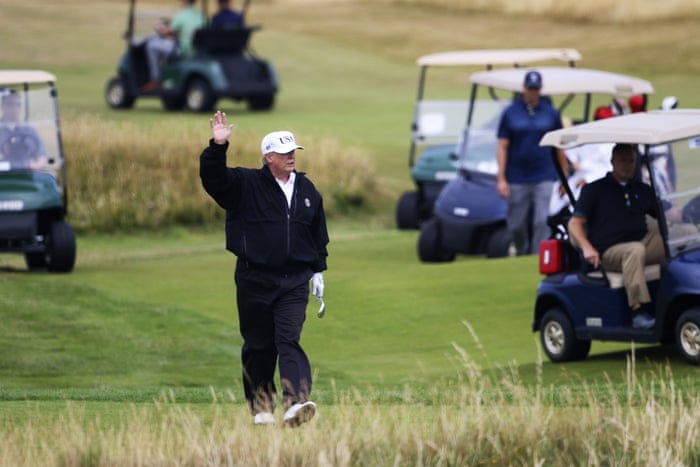 At Trump Bedminster in New Jersey, Trump once won a senior club championship from 87 miles away. He’d declared that the club should start having senior club championships for those 50 and up, but he forgot that one of the best players at the club had just turned 50. Having zero chance at beating the guy, he went up to his Trump Philadelphia course on the day of the tournament and played with a friend there. Afterward, according to a source inside the Bedminster club, he called the Bedminster pro shop and announced he’d shot 73 and should be declared the winner. The pro, wanting to stay employed, agreed. His name went up on the plaque. “But then,” says the source, “somebody talked to the caddy up in Philly and asked him what Trump shot that day. The caddy goes, ‘Maybe 82. And that might be generous.’ He pulls that kind of shit all the time around here.”

More than one source described another time when Trump happened to walk into the Bedminster clubhouse just as a worker was putting up the name of the newly crowned senior club championship winner on a wooden plaque. Trump had been out of town and hadn’t played in the tournament, but when he saw the player’s name, he stopped the employee. “Hey, I beat that guy all the time. Put my name up there instead.”

“Well, no, I know for a fact that’s not true,” Gillule says. “He never won any in the eight years I worked there. I mean, I loved working for Mr Trump, but you know, some people take a certain license with the truth.”

We do know that Trump played in the 2007 Westchester Men’s Club Championship and was knocked out in the first round by a 15-year-old named Adam Levin. Trump was four-up with five holes to play, helped greatly by the 60-year-old calling two ticky-tack rule violations on the kid, one for accidentally touching the grass inside a hazard and one for fixing a small ball mark off the green, both loss-of-hole penalties.

That’s when, according to Levin, Trump said to the small gallery, “The kid put up a good fight, didn’t he?” A small bonfire lit under Levin, who wound up winning hole after hole, tying Trump up through 18 and then winning on the second playoff hole.

“He didn’t even say ‘Congratulations’ or ‘Good match,’” remembers Levin, now a data analyst. “He didn’t look me in the eye. He just shook my hand and walked off. He’d kind of been a dick the whole day. We were together for five or six hours, so there was plenty of time for conversation with me or my parents, but all he ever said was, ‘Isn’t this course fantastic?’ and ‘Aren’t these facilities the best?’ He’s a total asshole with no character.”

That leaves three possible club championship wins, all at one course – Trump International in West Palm Beach. But we already know the 1999 win there is a lie, since the course wasn’t open. That leaves two. Of those two – 2001 and 2009 – I have never seen a signed scorecard or spoken to any objective person who remembers him winning or not winning.

Final score on the “18 club championships”: Lies 16, Incompletes 2, Confirms 0. By this time, Trump’s nose has grown so long he could putt with it.

The whole thing bugged me so much I started to itch. I wasn’t offended as a voter. I was offended as a golfer. For golfers, the stain of cheating is so much graver than winning or losing that we live in mortal fear of being called a cheater. Tom Watson accused Gary Player of illegally moving a leaf away from his ball at the Skins Game in 1983 and they’ve hardly spoken since. One leaf.

So here was Trump caterwauling about 18 golf championships that were faker than Cheez Whiz, and it started to make me think. How much of what Trump says about his golf brilliance does the country believe? During the campaign, when Trump stood up in front of 30,000 red hats and bloviated, “When it comes to golf, very few people can beat me,” did people buy that? Because 50 guys at every course in America can beat him.

When Trump held endless 18-hole meetings at his Florida courses with this prime minister and that emperor, were these leaders returning home to laugh at OUR president the way they laughed at him at the United Nations? Would they think all Americans cheat at golf?

It got me thinking …

Somebody should point out that the way Trump does golf is sort of the way he does a presidency, which is to operate as though the rules are for other people.

Somebody should explain that facts and truth are to Trump what golf scores and crowd sizes are—“feelings”—malleable and negotiable, flitting this way and that like a car-lot balloon man.

Somebody should write that the way Trump cheats at golf, lies about his courses, and stiffs his golf contractors isn’t that far from how he cheats on his wives, lies about his misdeeds, and stiffs the world on agreements America has already made on everything from Iran to climate change.

“Golf is like bicycle shorts,” I once wrote. “It reveals a lot about a man.”

You could write a book about what Trump’s golf reveals about him.