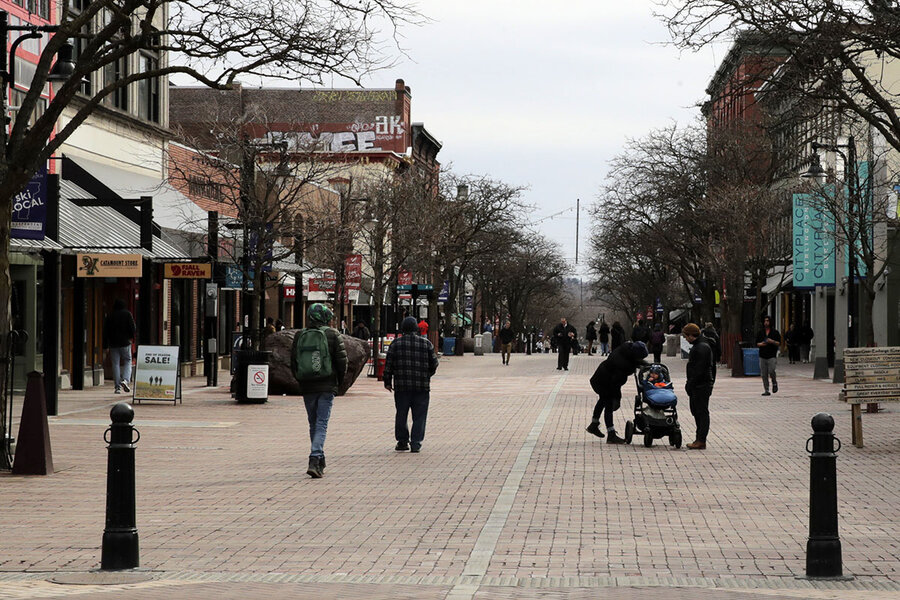 As he speaks, City Manager William Fraser gazes out on the heart of downtown Montpelier, Vermont.

“Just as we’ve been talking – and I have a window facing Main Street – every single person that’s gone by has had a mask on,” he says. “And that’s on the sidewalks.”

It’s his way of pointing out that many Vermonters are doing their all to contain the pandemic. The state has called on people to wear masks in public, and many here in Vermont’s capital are following through, outdoors as well as indoors. They may be playing a crucial role in this state’s battle against the most serious viral outbreak in a century.

Nationwide, a surge in cases notched an unwelcome milestone Wednesday, with the United States becoming the first nation to see more than 100,000 new COVID-19 cases in a single day. The spike has forced some states to pause their reopening plans and put new restrictions on activities.

On Monday, Massachusetts issued a new stay-at-home advisory and ordered in-restaurant dining stopped after 9:30 p.m. As of this week, Michigan restaurants have to track customer names and phone numbers. Maine has postponed bar reopenings and returned to stricter limits on indoor gatherings.

Until recently, rural America had largely avoided the brunt of the pandemic. But the most recent surge has put rural regions on two distinct tracks. Four of the five states with the highest rate of infections per capita are among the most rural states in the Great Plains. Here in New England, Vermont and Maine, the nation’s most rural states, have the lowest infection rates per capita, along with New Hampshire. Researchers are beginning to piece together why that is.

“Part of that is policy,” says Jacob Conway, a Ph.D. candidate in economics at Stanford University and co-author of a new study on the spread of the pandemic. That means things like the mask mandate and social distancing along with a spirit of public compliance.

In the early stages of the pandemic, he says, the key drivers were population size and density. While the virus this past spring was tearing through dense urban centers like New York, with thousands of new cases per day, Vermont’s new daily cases peaked at 72, according to data from Johns Hopkins University. With its biggest city, Burlington, less than one-sixth the density of New York City, and fewer than 4 in 10 Vermonters living in urban areas, Vermont was well situated to avoid major outbreaks.

So were less populous places like North Dakota, the eighth most rural state, which reached a daily high of COVID-19 cases similar to Vermont’s in late April. But in July, the two states’ trajectories began to diverge. By the end of October, the surge was so bad that North Dakota skyrocketed to the top of the charts, with the worst infection rate among the states and the highest seven-day averages of new cases and fatalities per capita.

Vermont, by contrast, has the lowest infection rate in the nation, at less than a tenth of North Dakota’s. And it’s earning kudos for its policies, such as a cautious reopening and a program to trace contacts in superspreader events.

“This should be the model for the country – how you’ve done it,” Dr. Anthony Fauci, the government’s top expert on infections, said of Vermont’s response in a September media briefing.

Ordinary Vermonters are on the front lines of compliance with state rules. Chris Cassidy in Woodstock, who was masked up while walking his dog through downtown Woodstock on Thursday, says people in his town and throughout the state are looking out for their neighbors by following state guidance. That includes mask-wearing, social distancing, and avoiding crowded areas.

“I know in my sphere; we’re doing as much as we possibly can,” he said. “And we have an older population, so it behooves us to do everything we can.”

Unlike Vermont, North Dakota never issued a mask mandate. Instead, Gov. Doug Burgum has encouraged mask-wearing and social distancing as a voluntary action. And voluntary actions have only gone so far.

When the pandemic hit, Vermont virtually shut down. Using cellphone data, which can determine when people carrying cellphones have moved, Mr. Conway and his colleagues found that Vermont residents reduced their trips by at least 63% between February and mid-April. North Dakota was more varied, with some counties shutting down as much as Vermont while nearly as many cut their mobility by no more than 51%.

As states have opened up, mobility has crept upward in both states, according to Google, which tracks callers who have their cellphone location history turned on. Also, officials worry about mask and social distancing fatigue.

“I think we’ve got some fatigue going on,” says Tracy Dolan, Vermont’s deputy commissioner of health. “During our contact tracing, more and more people are letting us know that some of the things they should’ve been doing, they weren’t doing.”

Since mid-October, the state has been tracking multiple outbreaks of COVID-19 cases linked to an arena in Montpelier that hosts youth and adult hockey leagues and broomball teams. The Montpelier arena outbreak led to Vermont’s first confirmed case of in-school transmission of COVID-19. As a result, the Union Elementary School here switched to remote learning on Oct. 23. The school returned to in-person instruction on Monday, with approval from state health officials.

Much remains unknown about the virus, so researchers hesitate to pinpoint the combination of factors that have made Vermont relatively successful in fighting the pandemic. Does it come down to personal choices or geography? One intriguing fact is that the states with the lowest infection rates per capita – Vermont, New Hampshire, and Maine – are all located next to each other in a corner of the country.

“This could be coincidence, but it could also suggest that position may be a factor,” Iván Franch Pardo, a geographer at the National Autonomous University of Mexico in Morelia, writes in an email. He and colleagues recently reviewed 63 scientific articles dealing with the geography of the pandemic. For example, it may be that fewer people and goods flow through them than the centrally located Plains states. The three states may be buffered by neighboring states, especially Massachusetts and New York, which have taken more active measures to contain the virus than North Dakota’s neighbors generally have.

Then there’s the industrial mix, Mr. Pardo says. Meatpacking plants have been a source of many COVID-19 cases, and they are more prevalent and larger in the Plains than in New England.

Still, there’s also evidence Vermonters are complying with their mandates more than North Dakotans are with their guidelines. In Carnegie Mellon University’s surveys on Facebook, Vermont consistently ranks among the top 10 states with more than 90% of surveyed residents saying they wear masks, while North Dakota ranks in the bottom 10, with roughly 80% saying they wear masks.

With the holidays approaching, one of the keys to containing the virus will be keeping gathering sizes down, says Ms. Dolan, the deputy health commissioner of Vermont. Even small holiday gatherings with 20 people may be risky, she warns. “It’s not that you shouldn’t get together with anyone, but it’s really about keeping that circle very small.”

The winter months will likely see some days with higher cases, but Vermont is building up its contact-tracing capacity so it’s prepared, she adds. “We’re asking people to hold on a little bit longer, stay vigilant, and hopefully we’ve got a very different year next year.”