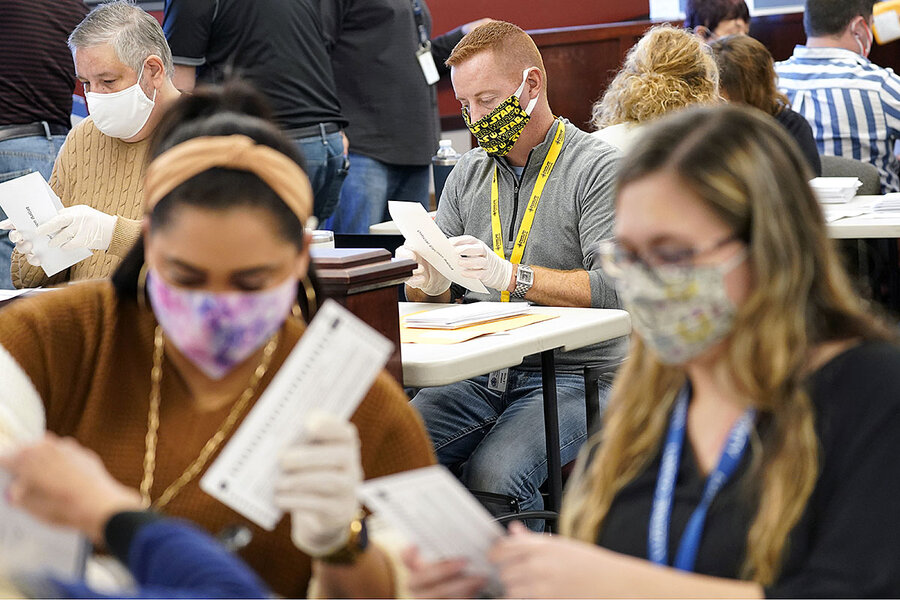 As Joe Biden continues to pick up ground in battleground states such as Nevada and Pennsylvania, President Donald Trump and his allies are moving to a new venue in an effort to hold onto the White House: the courts.

In Pennsylvania and other key states, the Trump campaign has filed lawsuits alleging a variety of ballot-related infractions. Trump officials have intervened at the Supreme Court in a case that challenges Pennsylvania’s intention to count ballots received up to three days after Election Day. The president’s team has vowed to seek a recount in Wisconsin and raised vague charges of improper voting in Nevada.

The Trump administration promised more challenges as the election is “clearly moving from the political to the legal,” says legal commentator and George Washington University Law School professor Jonathan Turley.

Attempting to tie up electoral results in courts across the country may offer little legal respite for the president’s campaign. Courts require solid evidence of fraud and show “a great deal of deference” to state election administrators, says Mr. Turley.

Courts also look at the final vote tallies, often throwing out lawsuits where it is mathematically impossible for the challenger to prevail. On Thursday, a judge in Michigan threw out a Trump campaign lawsuit to stop the vote count there. Democrat Joe Biden is ahead by 150,000 votes – far beyond the range of any recount – and the race has been called for him.

In some ways the legal moves may be just bare-faced bids to raise general doubts about the integrity of the election. On its face, the Trump campaign’s legal strategy is contradictory, even confusing. It has sued to stop ballot counts in Georgia and Michigan. Yet in Arizona, where Trump has gained as mail ballots are tallied, Trump supporters chanted “Count the vote!” outside a Maricopa County ballot processing location.

Like so much else in the Trump administration, the lawsuits may be aimed at satisfying an audience of one, backing up the president’s charge of an election “rigged” by his adversaries, and allowing him to frame and explain away a defeat.

“I think the litigation serves a broader purpose,” says Franita Tolson, a professor at the University of Southern California Gould School of Law. “It might not be about winning. It might be about changing the narrative.”

In Mr. Trump’s preferred narrative, he is not an electoral loser, but a victim “who would’ve won except for fraud and the incompetence” of state election boards, says Professor Tolson.

In many ways the Trump legal blitz is a chronicle of litigation foretold. The president has long said he would use any means to fight for reelection and that he would go to the Supreme Court if necessary. As a private citizen he was highly litigious and used lawyers and lawsuits as a weapon of public relations as much as law.

Early Wednesday morning at the White House, Mr. Trump appeared before reporters, insisted he had already won the election, and that voting should stop. Though he produced no evidence he said his opponents were stealing the election.

Since then he has tweeted “STOP THE VOTE!,” “STOP THE FRAUD!,” and other inflammatory comments while continuing to insist he will win the election. He’s vowed to legally challenge every state “claimed” by Mr. Biden due to voter and state election irregularities.

Taking an election dispute to the Supreme Court, as Mr. Trump said he would do during his appearance at the White House in the early hours of Wednesday, is not as simple as the president made it sound. Challenges must first be filed in lower state, or federal court.

That’s what Republican officials and the Trump campaign have done in the past two days, filing a flurry of lawsuits in courts in tightly contested states where mail ballots are still being counted – namely Pennsylvania, Michigan, Georgia, Nevada, and Arizona. In Pennsylvania, the Trump campaign scored a win Thursday when a judge ordered certain mailed ballots lacking identifying voter information to be set aside and not counted until the court could consider the matter further.

The legal challenges have made various specific claims. Some concern allegations of not having sufficient access to vote-counting locations. Others have alleged that mail ballots have been improperly handled, among other things by alerting voters to errors they made filling out their ballot. In Georgia, a case was thrown out after the judge found there was no evidence to support the campaign’s claims of improper ballot counting when two witnesses admitted under oath they had no knowledge of wrongdoing.

Succeeding with these kinds of postelection lawsuits requires meeting legal thresholds that the Trump campaign, in large part, hasn’t seemed able to. There must be concrete evidence of wrongdoing, or a compelling argument that a statutory or constitutional violation has occurred. Perhaps most importantly, there needs to be the possibility that the suit would affect the outcome of the election.

“It’s entirely possible that none of the lawsuits will impact the outcome,” says Michael Morley, an assistant professor at the Florida State University College of Law.

Counting the vote in Bucks County

Meanwhile, close up, ballot counting seems prosaic, even inspiring, as opposed to riddled with wrongdoing.

Outside the Bucks County Courthouse and Administration Building in Doylestown, Pennsylvania, 100 or so people stand together waving signs that say “COUNT EVERY VOTE.” Speakers take turns talking at a podium.

On Tuesday, Bucks County was sued by the Trump campaign. Larry King, director of public information for the county, says that before Election Day if they received a ballot and could tell from the outside that something was wrong with its preparation, they would contact the voter and ask them if they wanted to come in and correct the error. That’s what the lawsuit is about.

Inside the building giant TV screens in the hallways show what is happening just on the other side of a nearby wall: Tired workers with disheveled hair walk back and forth across a typical office space that looks like it needs a good cleaning. Crumbs, trash, and paper scraps litter the floor.

This is a room where the ballot counting happens. No one but the workers is allowed inside – not even Mr. King.

“After the ballots started arriving, it became like Fort Knox in there,” says Mr. King. “They don’t let me back there, they don’t let the janitor back there at night.”

There are roughly 30 people in the room – government employees who have to take an oath before they begin – working at any one time. The room has been operational since 7 a.m. on Tuesday morning.

“There are a lot of tired people in the building,” Mr. King says.

Inside the room are observers – one for each party, and one for each candidate on the ballot. First, ballots go through a sorting machine called “The Dragon,” a long silver thing that cost $500,000 and is so big they had to take out a wall to get it inside. Then comes the labor-intensive part: The ballots are opened, flattened, and put through one of 10 high-speed scanners.

All paper ballots are retained as backup. None of the equipment – not the Dragon, not the scanners – is hooked to the internet, to prevent hackers gaining access.

To claim fraud in a process the workers will have to repeat some 150,000 times before they are done is “really an insult to these poll workers who have been working their butts off,” says Mr. King.

Will the Supreme Court step in?

The Trump team lawsuit with the most potential credibility, experts say, is another case involving Pennsylvania. It concerns the state’s decision to allow mail ballots postmarked by Election Day but arriving up to three days later to be counted.

Republican officials in Pennsylvania challenged the so-called ballot deadline extension before the election, but the state supreme court upheld it. A preelection appeal to the U.S. Supreme Court was unsuccessful, though Justices Clarence Thomas, Samuel Alito, and Neil Gorsuch expressed an openness to the GOP argument.

“There is a strong likelihood that the State Supreme Court decision violates the Federal Constitution,” wrote Justice Alito. Only state legislatures, he wrote, have the power to make rules governing state elections.

The three justices asked Pennsylvania to segregate ballots received after Election Day so that if the deadline extension is overturned “a targeted remedy will be available.” The state agreed to segregate the ballots, and yesterday afternoon the Trump campaign asked the Supreme Court to revisit the case.

The justices have asked Pennsylvania to file a reply brief by the end of the day today, but has taken no other action. If the court does take the case, the new Justice Amy Coney Barrett – who joined the court a week ago – would be able to sit in judgment on the case since the preelection hearing was preliminary.

The Trump campaign “has a more than decent chance of success” if the Supreme Court takes the case, said David Strauss, a professor at the University of Chicago Law School, on a Wednesday call with reporters. But the bigger question, he added, “is whether that is likely to make any difference to the outcome of the election.”