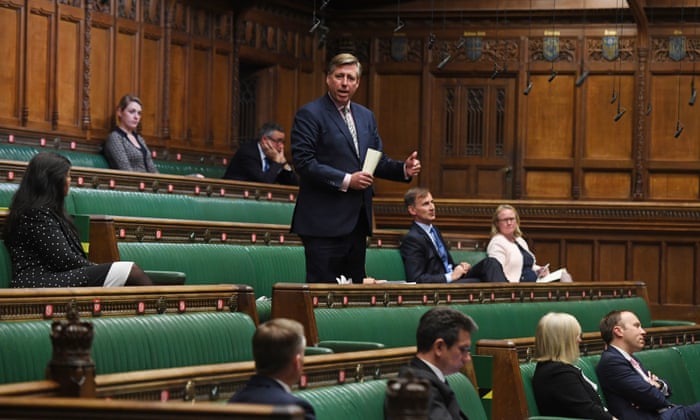 Senior Tory MPs have warned Boris Johnson that there would be mass revolts in the party and the country against any attempt to extend the national lockdown beyond 2 December as anger grows in Conservative ranks over government handling of the pandemic.

Evidence of growing Tory disquiet has risen since it emerged that data produced by No 10 last weekend to back the case for another lockdown exaggerated the potential number of deaths from Covid-19. Last week, the Office for National Statistics also suggested the rate of increases in cases had already started to slow – which many Tory MPs interpreted as meaning the previous regional three-tier approach was beginning to work.

Last Wednesday, the government won a Commons vote on imposing lockdown with a majority of 477 after opposition parties including Labour backed the plan. However, 34 Tory MPs voted against the measures while several others, including former leader Theresa May, abstained.

The rebellion was fuelled in part by comments from Michael Gove, who refused to rule out a further extension beyond 2 December. In the Commons, May said a rolling series of lockdowns would cause “irreparable damage” to the economy and have a “significant impact on lives”. She and others argued that the three-tier system had not been given adequate time to work.

Last night, the chair of the influential 1922 Committee of Tory MPs, Sir Graham Brady – who voted against – told the Observer he believed there would be many more rebels if any attempt were made to extend the restrictions. “Some of us voted against lockdown but my sense is that far more would make a stand if a third lockdown were to be contemplated.”

Brady said the way government had produced exaggerated figures at last Saturday’s briefing had caused huge disquiet. A slide used to justify the lockdown projected daily deaths reaching 1,500 by December – more than at the peak of the first wave. But government officials later acknowledged it should have shown an upper limit of 1,000 daily deaths – in line with the first-wave peak.

Brady added: “It is of serious concern that the data produced to justify this lockdown has begun to unravel so quickly. These are massive restrictions on the liberty and rights of constituents. It is essential parliament should have accurate and sufficient data before decisions are taken.”

Johnson has made it clear the new regulations will automatically elapse on 2 December but has stopped short of categorically ruling out a renewal or a fresh future lockdown if the R rate is not brought down to below 1.Labour leader Kier Starmer has made clear that ending the lockdown before the R had fallen to below 1 would be irresponsible.

Today the latest Opinium poll for the Observer shows a majority of people in England (64%) support the new lockdown, with a similar proportion (62%) believing it was introduced too late. Only 20% oppose it.

The poll suggests many people are sceptical about the current end date, with 58% believing it will be extended beyond 2 December. Only a fifth (19%) think the lockdown will end when planned. When asked about compliance, just under a fifth (18%) say they would break the rules if the lockdown is still in place on Christmas Day.

A former Tory cabinet minister now on the backbenches said most Conservative MPs who backed the lockdown did so with serious reservations and fears about the effects it would have on the economy, jobs and people’s mental health. The former minister said there would be “a massive revolt” that would shake Johnson’s authority if a new lockdown was proposed with infections levels anywhere near current levels.

Charles Walker, vice-chair of the 1922 committee, said the public had had enough of lockdowns and were making their own decisions on how to deal with the risks. He said: “People have rationalised Covid and are increasingly accepting of living alongside the virus. In March, the public had fled city centres, restaurants and shops two weeks before lockdown. Hours before the second lockdown started, they were laying siege to these very same facilities. There will not be a third lockdown beyond 2 December as the public will not accept it and the government will not have the moral or constitutional authority to impose it.”