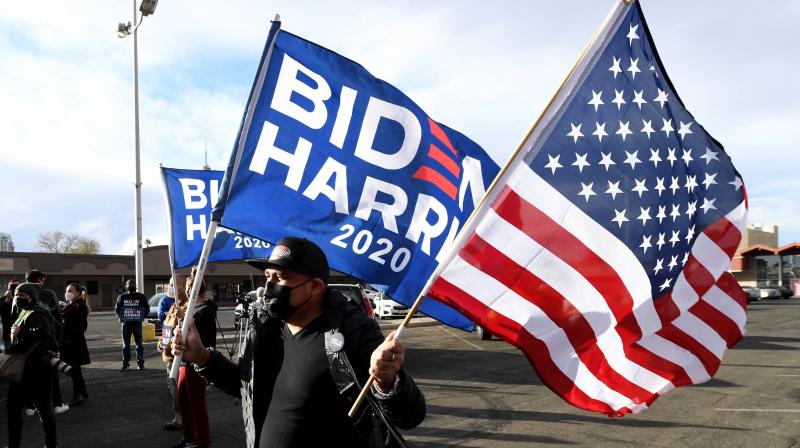 While Trump refused to accept the results of the election, many world leaders made it clear they backed the announcement that Biden had won with running mate Kamala Harris:

"Congratulations!" said Chancellor Angela Merkel. "I wish luck and success from the bottom of my heart.

"Our transatlantic friendship is irreplaceable if we want to overcome the great challenges of our times," she said in a tweet issued by a government spokesman.

French President Emmanuel Macron tweeted: "The Americans have chosen their President. Congratulations @JoeBiden and @KamalaHarris! We have a lot to do to overcome today's challenges. Let's work together!"

British Prime Minister Boris Johnson congratulated Biden "on his election as President of the United States and Kamala Harris on her historic achievement.

"The US is our most important ally and I look forward to working closely together on our shared priorities, from climate change to trade and security."

NATO chief Jens Stoltenberg described Biden as a "strong supporter of our Alliance".

Stoltenberg, who often had to adapt to President Donald Trump making unexpected announcements about US troop drawdowns from NATO deployments, said in a tweet he looked forward to working with Biden.

"A strong NATO is good for both North America and Europe," he said.

Canada's Prime Minister Justin Trudeau said: "I look forward to working with President-elect Biden, Vice President-elect Harris, their administration, and the United States Congress as we tackle the world's greatest challenges together."

"The Australia-US Alliance is deep and enduring, and built on shared values. I look forward to working with you closely as we face the world's many challenges together," he said on Twitter.

New Zealand Prime Minister Jacinda Ardern, a popular leader who had verbally jousted with Trump, congratulated Biden and Harris in a tweet focused on cooperation.

"With so many issues facing the international community, your message of unity is one we share. New Zealand looks forward to working with you both!"

The republic's Prime Minister Micheal Martin was one of the first to take to Twitter, tweeting: "I want to congratulate the new President Elect of the USA @JoeBiden. Joe Biden has been a true friend of this nation throughout his life and I look forward to working with him in the years ahead. I also look forward to welcoming him back home when the circumstances allow!"

Prime Minister, Kyriakos Mitsotakis tweeted: "Congratulations to US President-Elect @JoeBiden. Joe Biden has been a true friend of Greece and I'm certain that under his presidency the relationship between our countries will grow even stronger."

Prime Minister Giuseppe Conte tweeted: "We are ready to work with the President-elect @JoeBiden to make the transatlantic relationship stronger. The US can count on Italy as a solid Ally and a strategic partner."

Prime Minister Pedro Sanchez tweeted: "Congratulations @JoeBiden and @KamalaHarris. We wish you good luck and all the best. We are looking forward to cooperating with you to tackle the challenges ahead of us."

"Your success is pathbreaking, and a matter of immense pride not just for your chittis, but also for all Indian-Americans," Modi said in a tweet to Harris.

"Chitti" is a Tamil term of endearment for the younger sisters of one's mother, which Harris used in her acceptance of the Democratic nomination for vice president.

President Muhammadu Buhari, leader of Africa's most populous nation, called for "greater engagement" with the continent.

He said he looked forward to "enhanced cooperation between Nigeria and the United States, especially at economic, diplomatic and political levels, including especially on the war against terrorism".

President Cyril Ramaphosa said on Twitter his government looked forward to "working with you and deepening our bonds of friendship and cooperation".

President Barham Saleh extended "warmest congratulations" to Biden, describing him as "a friend and trusted partner in the cause of building a better Iraq. We look forward to working to achieve our common goals and strengthening peace and stability in the entire Middle East".

President Abdel Fattah al-Sisi said Egypt, the most populous Arab country, looked forward to "strengthening strategic bilateral ties between Egypt and the US in the interest of both countries and peoples".

"Warm congratulations to @JoeBiden and @KamalaHarris. I look forward to working with you to further strengthen the Japan-US Alliance and ensure peace, freedom, and prosperity in the Indo-Pacific region and beyond," Suga wrote on Twitter.

South Korean President Moon Jae-in tweeted: "Congratulations to @JoeBiden and @KamalaHarris. Our alliance is strong and the bond between our two countries is rock-solid. I very much look forward to working with you for our shared values."

However Mexican President Andres Manuel Lopez Obrador said it was too soon to congratulate Biden and he would wait for "all legal issues" in the US election to be resolved.

"We don't want to be imprudent. We don't want to act lightly and we want to respect people's self-determination and rights," Lopez Obrador, who has had good relations with Trump, told reporters.

What will Democrats offer Georgians?

Time to heal America: Biden urges unity in his first speech as US President-elect