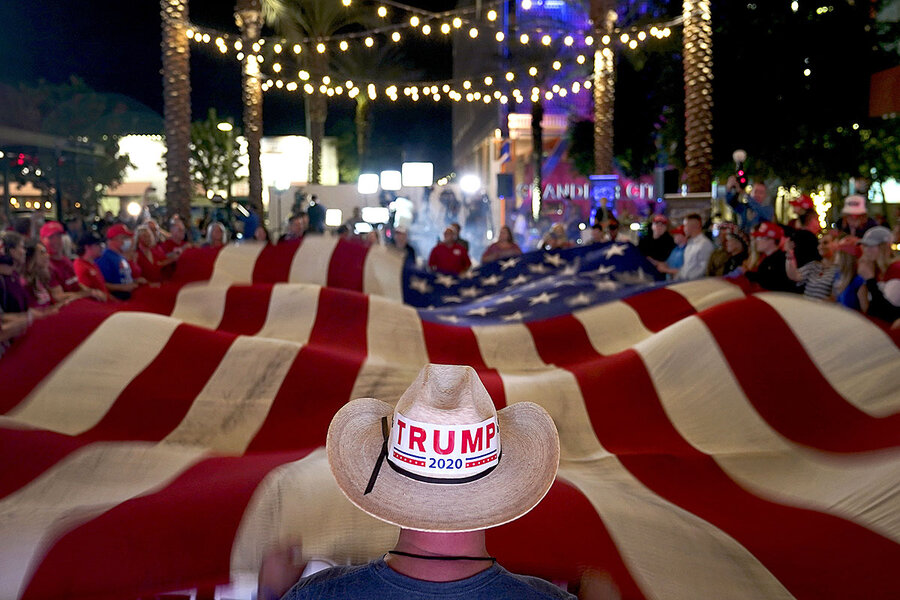 President Donald Trump may lose reelection, but if the nail-biter contest of 2020 has shown anything, it’s that “Trumpism” is here to stay.

As a political agenda divorced from the more controversial aspects of his personality and style, Trumpism is part Reagan Republicanism – lower taxes, less government regulation, cultural conservatism – plus a pivot toward a hard line on immigration and an “America First” approach to foreign policy. It’s also infused with old-fashioned populism, in its appeal to Americans who feel forgotten by the powerful.

As long as President Trump himself remains in the public eye – which he is expected to do, win or lose – his outsize persona will ensure that his political brand dominates the Republican Party for the foreseeable future.

But the preeminence of Trumpism within the GOP is not just about one man’s ability to garner attention and appeal to a significant portion of the electorate. It’s also about the deeper currents of thought that he has tapped into – and which long predated his fateful ride down the escalator at Trump Tower in June 2015.

“For the past 40 years, our political paradigm has shifted from ‘left versus right’ to ‘front versus back,’” says Mo Elleithee, director of the Institute of Politics and Public Service at Georgetown University.

“It’s about people who feel stuck at the back of the line versus those at the front who they feel are keeping them back,” he says.

In Mr. Trump’s terms, it’s about fighting the “swamp” – the Washington establishment, of both parties, that he says are in it for themselves, not hardworking Americans.

In recent memory, a series of “outsider” presidents has come to Washington – from Jimmy Carter and Ronald Reagan to Bill Clinton and Barack Obama, all of whom staked claims to addressing concerns of the “little guy.”

But nobody can match the sheer disruptiveness of Mr. Trump, both in style and policy. The president’s continuing popularity within the Republican base means that he still holds the party in his thrall, regardless of how GOP leaders feel.

When polls suggested that Mr. Trump might lose badly on Election Day, some vulnerable Republican senators started tiptoeing away from him – particularly on his handling of the pandemic. He also faced criticism for not clearly denouncing a white supremacist group during the first presidential debate.

Now that Mr. Trump has overperformed expectations in the election results, and still has an outside shot at winning, party officials are circling the wagons. His grip on the party seems as tight as ever. And even if he loses, he will remain the party’s leader, at least through the midterms – and likely until there’s a clear GOP presidential front-runner for 2024.

It’s also possible Mr. Trump will run again for president himself. At the very least, he is expected to maintain a public presence – via Twitter, public appearances, possibly his own media venture – which would allow him to keep the embers of a potential political comeback burning bright.

For experienced party hands, Mr. Trump is a wonder to behold. In early 2013, Henry Barbour, Republican National Committee member from Mississippi, co-wrote a report on the future of the GOP. Dubbed the “autopsy,” it aimed to reimagine a more inclusive party, following presidential nominee Mitt Romney’s loss in 2012.

Most memorably, the report embraced comprehensive immigration reform, in an effort to recast the party as more welcoming to minorities. At the time, Mr. Trump lashed out against that recommendation: “Does the @RNC have a death wish?” he tweeted.

The rest is history. He launched his 2016 campaign by railing against unauthorized Mexican immigrants. “Build the wall” has been a Trump rallying cry ever since.

“Certainly, the president’s tone on immigration is not consistent with what we wrote in the report,” Mr. Barbour says in an interview. “It is what it is.”

But, he notes, the president did better Tuesday than he did four years ago with Latino voters as well as African Americans. And he points to a logic in Mr. Trump’s approach.

“That’s something we missed in the report,” Mr. Barbour says. “How do we consistently win working-class voters of all backgrounds?”

At heart, the future of Trumpism is very much tied to the legions of Americans he has brought into his orbit, including first-time voters – some of whom have sat out many elections but are now invested in Mr. Trump and his goals.

Mr. Trump has won many converts, such as Steven Mosley of Alexandria, Virginia, who works in higher education. Four years ago, he didn’t vote for Mr. Trump – but on Tuesday, he did.

“He is the only Republican in my lifetime that actually said he was going to do something and did it,” says Mr. Mosley, who points to judicial appointments, moving the U.S. Embassy in Israel to Jerusalem, and defunding Planned Parenthood.

All political parties are coalitions, as is the Trump electorate – effectively the Republican Party, minus the “Never Trumpers.” Not all Trump voters like his brash style but many do, citing his willingness to fight hard and flout norms.

“A lot of his base, they love his behavior,” says Dick Wadhams, a veteran GOP strategist in Colorado.

Others are willing to vote for Mr. Trump in spite of his style, citing his traditional Republican approach to taxes and regulation.

For now, GOP strategists say, Mr. Trump is the Republican Party. To some “Never Trumpers” – a slice of the Republican elite that cannot abide the president’s persona or values – a Trump loss in the presidential race would mean the end of his party control.

Trumpism is a “cult,” says Rick Tyler, a former top aide to Republican Sen. Ted Cruz of Texas. And if Mr. Trump loses the election, “the cult goes away.”

To University of Denver political scientist Seth Masket, Trumpism represents “a loyalty to him rather than to any specific ideology. It’s an alternative to conservatism.”

Indeed, perhaps Mr. Trump’s most significant departure from conservatism is his seeming lack of care about the debt and deficit, even before the pandemic.

Other analysts see a certain logic in Trumpism.

“Trumpism itself has a much more anti-globalist ideology than traditional Republicanism,” says Brandice Canes-Wrone, a political scientist at Princeton University. “It’s more generous in terms of social insurance; he’s not trying to significantly reform Social Security or Medicare, or even indicating any interest in doing that.”

She notes that elements of Trumpism adhere to traditional Republican philosophy, including in its conservative judicial philosophy and its approach to taxes and regulation.

“Those areas are consistent,” Professor Canes-Wrone says. “But the anti-globalism and even the kind of strong preservation of Social Security and Medicare and the willingness to spend a lot during the pandemic, you could say anyone would do that. But with Trump, you don’t sense the kind of hesitation you might find with a more traditional Republican.”

How Mr. Trump would handle a second term – a live possibility at time of writing – could go a long way to determining the future of the GOP. One important question: How would he behave, given that he would no longer need to campaign, at least for himself?

“He could take a look at how his own behavior clouded the success of his administration over these past four years, and make the decision to be different,” says Mr. Wadhams. “Or he could double down and be even more confrontational than he was the first term.”