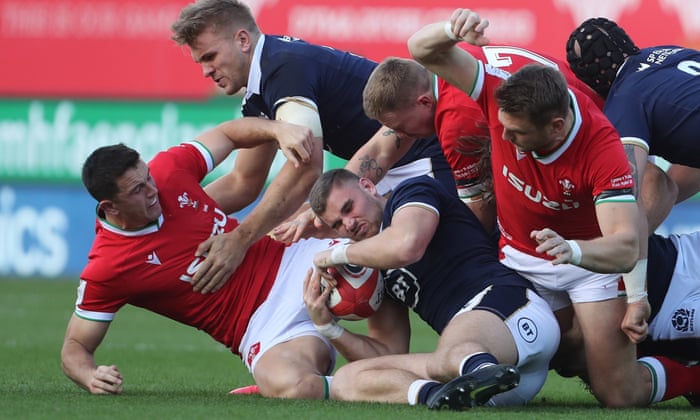 Take the “row” out of “crowd” and what are you left with? CD, a disc which is one way of trying to develop an atmosphere in an empty stadium. Home teams are having to generate their own energy with the lack of support having a clear impact.

The last weekend of the Six Nations saw the penalty count won by the away side in all three matches. The three hosts were awarded a total of 27 penalties with their opponents receiving 47, an average of nearly 25 a match compared to 18 in the opening three matches, which were all played before crowds and divided equally between the home and away side. Is it a coincidence that Manchester United have conceded five penalties in their last seven Premier League matches at Old Trafford when the previous five spanned 101 contests?

Scotland profited in Llanelli on Saturday from the current restrictions, but such was their purpose and drive against opponents trying to find themselves, they would have been a handful at a packed Principality Stadium. It was their first away victory in the Six Nations other than in Rome for 10 years and the first time they had recorded three successive victories in a campaign since Italy joined in 2000.

A year ago, Scotland were on an early flight out of Tokyo after failing to make the knockout stage of the World Cup while Wales, the grand slam champions, were on their way to the semi-final where they came within a disputed penalty from making it to the final. Many of those campaigners took the field in Llanelli, but the head coach Warren Gatland has gone, along with his defence coordinator and mood-setter Shaun Edwards, who switched to France and helped Les Bleus to their best campaign for 10 years.

Gatland’s successor, Wayne Pivac, this week received the backing of the Welsh Rugby Union’s interim chief executive, Steve Phillips, and the example of the Scotland head coach, Gregor Townsend, shows that change can take time. John Barclay, the former Scotland captain, was at Parc y Scarlets on Saturday, a ground he used to call home, and does not believe Wales’ slump will last long.

“Most teams play the same across the board, but there are small tweaks, which can take time,” said Barclay, who will be part of Amazon Prime Video’s commentary team for the Autumn Nations Cup, which starts next Friday. “Wales’ attack was not cohesive and it looked as if they were in between systems: it was not the way I know Wayne and Stephen Jones [the attack coach] like and it was sometimes the old Gatland style. Listening to the outcry, you would assume Wales won every game under Gatland.

“Wales is a tough place to coach and I would not fancy it. The media tried to get rid of Wayne a few weeks after he started at the Scarlets and a group of players then made an attempt to do so. He has a thick skin and knows he is in a results-based business. It gives the autumn extra meaning for him.” 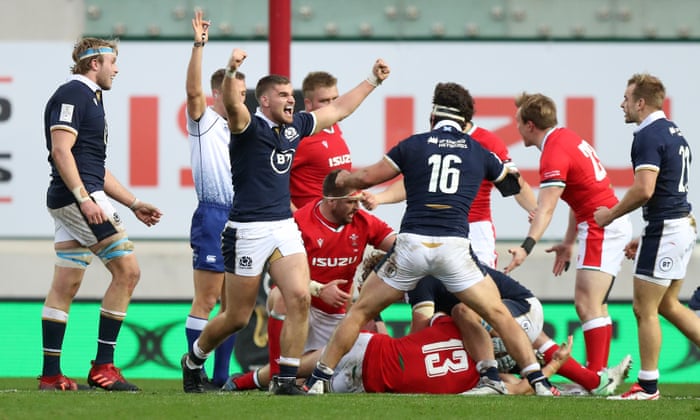 Barclay only once savoured victory against Wales, when he led Scotland in 2017. “It was nice to be there and see it,” he said. “It was the first time since I have retired that I thought it would be fun to be playing. Scotland looked comfortable and at no point looked like losing. I played in a number of Scotland teams that were bullied up front and I have not seen one so nullify Wales in the scrum, lineout and maul or at the breakdown and on the gainline.

“There is not a lot that separates five teams in the Six Nations and Scotland are coming up to the standard. We lost our way at last year’s World Cup, which I was part of. We are clunky and definitely not all on the same sheet. There is an undercurrent of excitement now and, while I try not to get carried away and appreciate there is a way to go, there is a backbone to the side and greater depth. The Autumn Nations Cup match against France at Murrayfield [on 22 November] will be one to watch.”

With France taking the national side seriously again and England Six Nations champions for the third campaign in five, the Celtic nations need to respond now that Amazon is using the autumn to see if televising rugby pays. It would suit the company if England and France contested the final, given it is likely to sell more subscriptions than if Wales faced Fiji, which at a time of financial uncertainty could fracture unity.

During the negotiations with the private equity company CVC, England and France argued they deserved a greater share than the other four because they had more mouths to feed. They were slapped down, but would they revisit the argument if Amazon became a long-term partner for whom numbers were paramount?

“Wales and Ireland will maintain their standards,” said Barclay. “Ireland are doing well at provincial level and, like Wales, they have a core of experienced players. There is talk about the futures of Johnny Sexton and Connor Murray based on whether they will be around for the next World Cup, but the time to replace anyone is when they are not playing well, not because there is a tournament in three years.

“England will be the favourites in the autumn having won the Six Nations and France have become one of the world’s form teams, but it is hard to quantify the impact on the home side of not having a crowd. I like the idea of tournament rugby in the autumn and while it came about by accident rather than design because of the pandemic, it has great potential.”