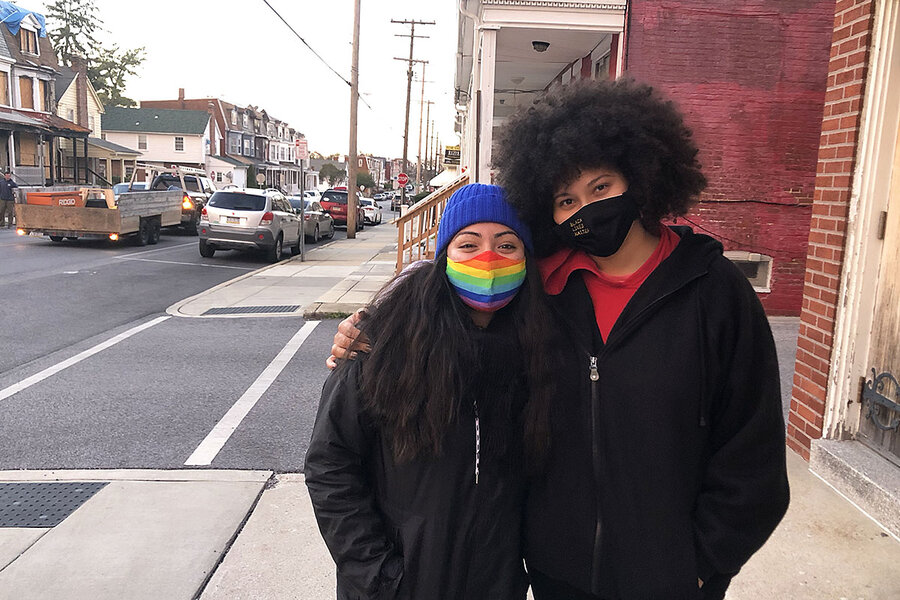 When people picture a first-time voter, it likely isn’t Shona Dausinger. The middle-aged woman with a Paula Deen-style gray blowout walks toward her car from her polling location in Shrewsbury, Pennsylvania, with her husband, Jeff, after casting her first-ever ballot – for President Donald Trump.

“I just never really thought voting was a big deal before,” says Ms. Dausinger, with a shrug of her shoulders.

One state away in Ohio, Delaney Murphy and Allie Bingham, University of Cincinnati students and first-time voters, brim with enthusiasm after casting their first-ever ballots for former Vice President Joe Biden.

Despite a chaotic election week fraught with partisan tension, the voting on Tuesday had a major bright side: a rush of voters exercising their constitutional right for the first time.

Some estimates project that the final turnout will be more than 66% of eligible voters, the highest rate in 120 years, with the 2020 turnout already exceeding 2016’s turnout in 42 states – a sign of engagement by Republicans and Democrats alike.

After driving by his Shrewsbury polling place several times on Tuesday to assess the line, Zack Ness, a field technician for an engineering company, pulled into the parking lot in his work truck. “I’m 34 and I’ve never voted in any election, but this feels important to me,” said Mr. Ness, adding that he also helped his father register so he could cast his first-ever ballot for President Trump.

Turning out young – frequently first-time – voters like Ms. Bingham and Ms. Murphy has long been a play of the Democratic Party, and this year was no different. Thus far, more than 60% of voters under the age of 30 went for Mr. Biden, and of this year’s more than 10 million first-time voters, more than 60% were either Democrat or unaffiliated.

But the Trump campaign has always recognized the possibility of expanding its base with first-time voters such as Ms. Dausinger and Mr. Ness. As the Cook Political Report’s Dave Wasserman found within 14 battleground states – including Pennsylvania and Ohio – almost 50% of nonvoting citizens in 2016 were white, non-college-educated adults, a slice of the electorate that Mr. Trump has won handily.

The 2020 race has often been framed as Democrats attempting to expand their base while Republicans focus more on restrictions they argue are needed to protect the voting process from fraud. But this year’s historic turnout is likely due to enthusiasm on both sides.

“People are like, ‘Why was there no blue wave?’ Well, there was one. There was a red wave going at the same time,” says Michael McDonald, who runs the U.S. Elections Project at the University of Florida and is an expert on voter turnout. “And that’s how you get a historic turnout. You can’t get it from just one-half of the country voting.”

And outside a polling precinct in downtown York, Pennsylvania, the enthusiasm extended to those who aren’t even eligible. Best friends Tzipporah Goins and Arlette Morales can’t vote this year: Ms. Goins turns 18 the week following the election, and the Mexican-born Ms. Morales is not a citizen. Still, they volunteered to be poll watchers, sitting in foldout chairs outside on the sidewalk, greeting voters as they left the Cornerstone Baptist Church and asking if they were able to vote without any problems.

“I still want to participate in a system that doesn’t include me, because I still want to be included,” says Ms. Morales. “It’s hard. I try to push people to register to vote because if I can’t vote, then I have to at least get other people to vote for me and my family. I still want to put my own grain of salt into this election.”