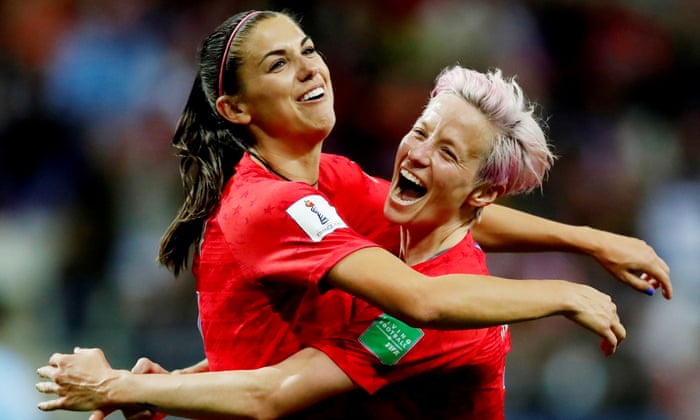 Donald Trump’s defeat in the 2020 US presidential election has been celebrated by athletes across America.

Trump has been involved in several clashes with high-profile athletes, such as NBA superstar LeBron James and World Cup winner Megan Rapinoe, during his presidency and the former was quick to react to the news that Joe Biden will take power in January.

James tweeted a video of himself smoking a victory cigar alongside a link to More Than A Vote, a campaign he has headlined to harness the power of black voters. The 16-time All-Star also posted a photo of one of the most famous moments of his glittering career, when he pulled off a spectacular block of Andre Iguodala during the 2016 NBA finals. However, in Saturday’s tweet he had superimposed Biden’s head on his body with Trump as Iguodala. “Your pettiness level is through the roof and I’m here for it,” wrote WNBA star A’ja Wilson in response.

James, one of the most famous athletes in America, has repeatedly tangled with the president. James has been critical of Trump throughout his term in office. In September 2017, James called Trump a “bum” for rescinding his invitation to the Golden State Warriors to celebrate their NBA championship with a visit to the White House. “Going to the White House was a great honor until you showed up!” James tweeted at the time. Several other championship teams, including the NFL’s Philadelphia Eagles, were also disinvited or chose not to attend White House ceremonies during the Trump presidency.

James has been one of the NBA’s most vocal advocates of the Black Lives Matter movement. Most of the league’s players knelt during the anthem this summer in protest against racial injustice. In turn, Trump said such protests have hit the NBA’s TV ratings, and he reveled in chants of “LeBron sucks” at a recent rally. “What a crowd! What a crowd!” Trump said as the chants broke out.

Meanwhile, shortly after Saturday’s result came in Rapinoe tweeted a thank you to “Black Women”, who voted overwhelmingly for Biden in this year’s election. Rapinoe was one of the first white athletes to kneel during the US national anthem and has called Trump sexist and misogynistic. Before the 2019 World Cup she said she would not go to the White House celebrations if the US lifted the trophy, a promise she kept.

NBA star Donovan Mitchell echoed Rapinoe’s sentiments. “I am extremely excited to have @JoeBiden as president but growing up with my mother and sister two black women! For them to have someone like @KamalaHarris leading the charge man is truly incredible not just for black people but for BLACK WOMEN!,” wrote the Utah Jazz guard.

The reigning US Open champion, Naomi Osaka, wore facemasks bearing the names of black Americans killed by police during her run to the title in September. She has also spoken of her support for Black Lives Matter, a movement Trump has denigrated on several occasions. On Saturday, Osaka tweeted a clip from The Office in which lead character Michael Scott shouts “Thank you”.

Basketball hall of famer Dawn Staley, congratulated her home town of Philadelphia, which helped Biden carry Pennsylvania and win the election. “IT JUST HAPPENED! #PHILLYSTANDUP #WHATMATTERS,” she tweeted. Staley was a huge star in the WNBA, which is perhaps the most politically active league in the United States. In August, WNBA players wore “Vote Warnock” T-shirts to games, a reference to Raphael Warnock, who is running in Georgia against Trump ally Kelly Loeffler for her US Senate seat. Loeffler is also a part-owner of WNBA team Atlanta Dream.

Trump trying to get back into the White House after golfing this morning pic.twitter.com/tPdmiiX8No

There was even celebration in baseball, often seen as a sport whose players skew white and conservative. St Louis Cardinals pitcher Jack Flaherty retweeted several of James’s posts and also wrote “you love to see it” after Biden’s victory was announced.

Not every athlete was pleased at the result though. Trump enjoys strong support in UFC, which is led by a friend of the president, Dana White. “The media state has declared Joe Biden the President. I wonder when trump gonna drop the hammer to fix the scorecard?” wrote welterweight Jorge Masvidal. Aubrey Huff, who won two World Series with the San Francisco Giants, accused the media of “premature ejaculation” in declaring Biden the winner of the election and added: “Congrats to @JoeBiden for your record breaking victory! Machines, black sharpies, big tech, social media companies, & China will be pleased.”

However, one athlete stayed notably silent in the hours after Biden was declared the winner of the election. It was Colin Kaepernick who kickstarted the athlete protest movement that has so enraged Trump during his presidency when the NFL quarterback knelt for the anthem in 2016. On Saturday afternoon, he had decided to let the result of the election speak for itself.