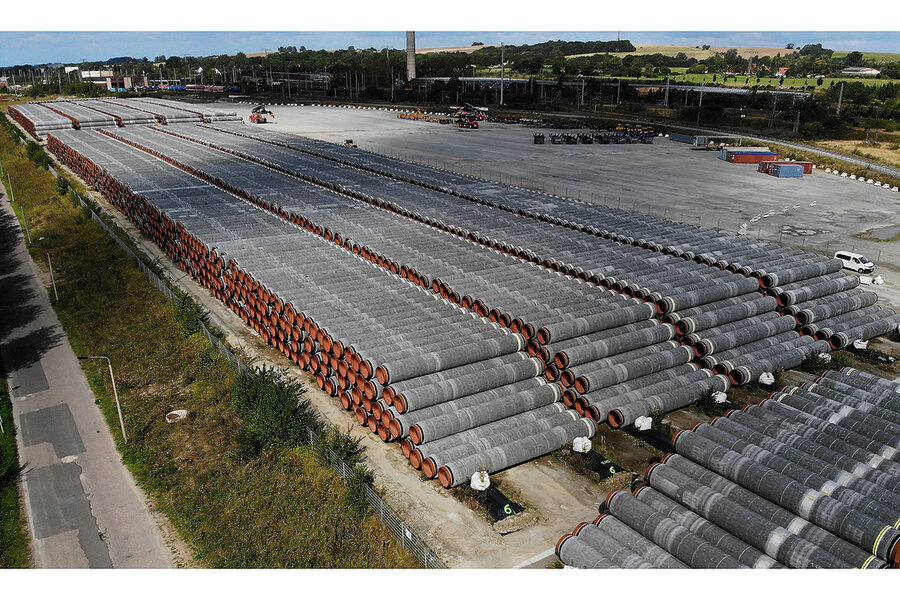 From the tiny port town of Sassnitz in northeast Germany, local politician Christine Zillmer bristles with fury when she recalls how America stuck its nose in her country’s business.

Late in 2019, a trio of American senators insisted international firms halt work on a controversial natural gas pipeline linking Russia and Germany. Failure to comply would mean sanctions for companies doing business around the pipeline, and a Swiss-Dutch company pulled out of the project, leaving the Russians to send ships to lay the last stretch of pipe.

The senators named her hometown’s port operator in the letter, and Ms. Zillmer saw red.

“I went into shock as if I just saw a terrible car accident,” says Ms. Zillmer. “Sassnitz is small, and to threaten these ‘small people’ with sanctions is shortsighted. We are simply a chess piece, with Germany caught between America and Russia.”

In August, a new development came in this game of transatlantic chess: Russian dissident Alexei Navalny was poisoned in an apparent attack, and then evacuated to Berlin, where German leadership ensured his safety and medical care. German Chancellor Angela Merkel said the Kremlin must answer for the attack, while her party’s politicians began to publicly question whether Nord Stream 2 should be halted.

On the face of it, Nord Stream 2 is simply an energy project. Yet, because it connects Russian natural gas with Germany and Europe at a time when the West has little trust in Russian President Vladimir Putin, the pipeline has become a geopolitical flashpoint. Climate change activists have also seized on the opportunity to remind the world its natural gas product is the energy of yesteryear. How will the project’s optics fare under a Joe Biden presidency? He has opposed the pipeline, yet he’d likely want to avoid the appearance of exerting undue influence over key allies like Germany, as he works to reestablish and strengthen transatlantic ties with Europe.

“The main question,” says Christoph Weber, an energy economist at the University of Duisburg-Essen, “is ‘How far can Europe go to allow America to use its powers to influence American interest on European ground?’”

The U.S. contends that Nord Stream 2 – the second of twin pipelines that would supply the European Union with 55 billion cubic meters of Russian natural gas each year for the next 50 years – would increase European dependence on Russia. The Germans, however, counter that Americans are driven less by European energy security than the desire to sell more liquefied natural gas to Europe.

It’s energy at the cross section of economics and geopolitics. Since roughly a quarter of Germany’s energy needs are met with gas, almost all imported, “of course the question of gas and where we get it is important for the German economy,” says Julian Hinz, an international economist at the Kiel Institute for the World Economy.

Yet Nord Stream 2 would foster a mutual, rather than one-sided, dependency between Germany and Russia, says Dr. Hinz. “It’s a dependency fostered by trade. Of course the Russians could stop sending gas, but we could also stop paying them. They need this income. On the other hand, if sanctions are implemented, this costs both sides.” And, he adds, other ways of importing gas might be more expensive.

But the poisoning of Mr. Navalny in August was a reminder of how antagonistic Germany’s relationship with Russia has become. “Navalny was not the first incident,” says Stefan Meister, a political scientist and Russian-EU relations expert. There was also the Russian hacking of the Bundestag, Russia’s constant disinformation campaigns, and the 2019 shooting of a man in a Berlin park believed to have been orchestrated by Russian agents.

German Foreign Minister Heiko Maas told Bild that he hoped “the Russians won’t force us to change our position regarding the Nord Stream 2.”

The renewed focus on Nord Stream has also been a clarion call for climate change scientists, who say switching to natural gas is a waste of time. “Climate change is happening much faster than we previously thought,” says Dr. Niklas Höhne, a German climatologist and founding partner of the New Climate Institute. “Ten years ago when the German government was thinking about [Nord Stream 2], we thought gas was more of a bridge energy towards renewables, but we are much too late. We have to go directly to renewables.”

The billions in investment in Nord Stream could have instead been used to forge ways to use less energy, such as retrofitting buildings, climate experts argue. It could also have been pumped into renewable energy such as wind, whose industry in Germany has suffered with tens of thousands of layoffs.

Yet few experts believe Nord Stream won’t ultimately go through. A “big shift” – say, of anti-Russia voices and climate change activists coming together – hasn’t aligned to really jeopardize this project, says Michal Baranowski, director of the Warsaw office of the German Marshall Fund of the U.S. And stoppage would result in major lawsuits and come at great cost to all partners involved.

Still, there’s plenty of speculation. If Mr. Biden asks “Germany to reconsider Nord Stream 2,” Mr. Baranowski says, “it’s going to be much more difficult for the German government to say no to President Biden, rather than President Trump.”

Back in Sassnitz, whose Mukran Port had suddenly become a household name in Russian-EU geopolitical circles, the politician Ms. Zillmer says the pipeline should be “separated” from Germany or America’s wish to punish Russia. “For the people in this region, if the project doesn’t go through, it would mean we let ourselves be dictated, be threatened by America.”

One way to avoid that, she says, is to make sure the U.S., Germany, and Russia are talking. Ms. Zillmer and a group of citizens had sent a letter to U.S. Sens. Tom Cotton, Ted Cruz, and Ron Johnson to that effect. “I was really ready to make compromises with these three senators,” but they didn’t answer. “I do think our letter arrived … but then they forgot about it.”

In the end, she says, the furor over Nord Stream 2 is not a financial one in Sassnitz. While many in her orbit had been employed around the logistics and pipe-laying, “now they are done and those jobs are gone,” she says. “Economically, [halting] Nord Stream 2 won’t hit us. But it is hitting us emotionally.”