Students clashed with police on Monday in protests over health risks posed by schools being open during the novel coronavirus crisis, local police and the town’s mayor said. The local police department said on Twitter that four arrests had been made, one fireman had suffered minor injuries and that there had been “unacceptable” incidents of criminal damage caused during the clashes. Videos on social media showed a group of youths surrounding a police car outside the Lycee Mireille Grenet school and trying to overturn it, while other videos showed fires burning in the street.

Compiegne Mayor Philippe Marini also confirmed to BFM TV that there had been trouble, and condemned the attacks on police officers.

Student demonstrations have started to build up in France over the last week, with some teachers and students protesting against keeping schools open – while the rest of France is in lockdown – saying it jeopardises their health due to the risk of catching COVID-19 on crowded school premises.

Teachers’ unions are due to hold a nationwide day of protests and strikes on Tuesday. 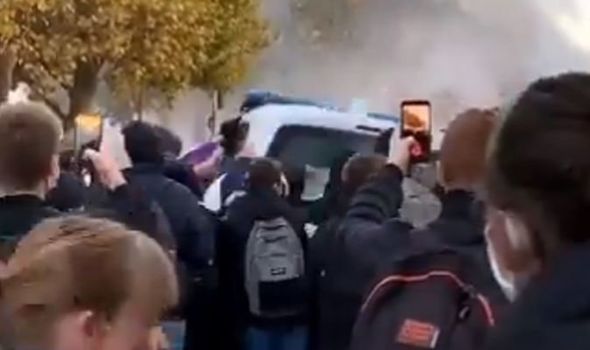 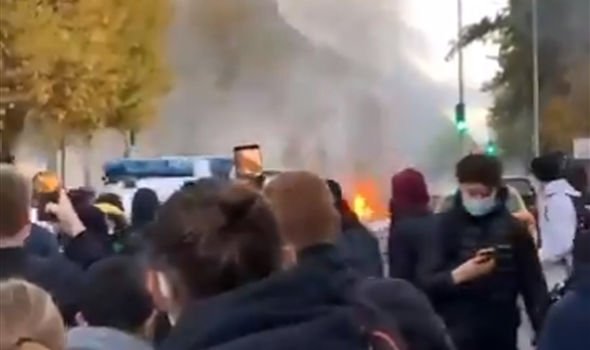 It comes after protests saw several dozen students use wheelie bins, metal grills and supermarkets trolleys to block access to the entrance of the Lycee Colbert in central Paris during the morning.

Students also hung a banner reading “on strike” from a ground floor window.

Some students hurled coloured liquid and glass projectiles when riot officers moved in, using pepper spray and their shields to push the pupils back.

Jean, a pupil at the Lycee Colbert, said: “Our classes are packed, with students sitting side by side. 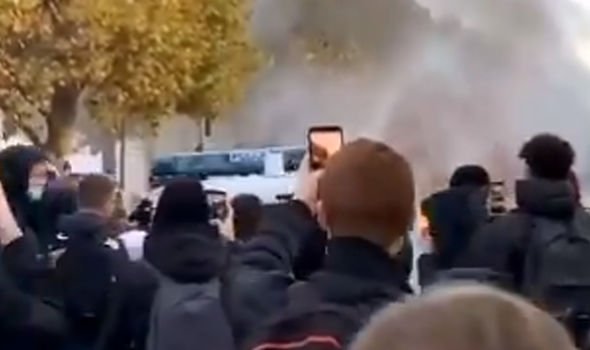 “They’ve tried to rearrange the tables but it changes nothing because there’s still 30 of us in a class.”

Class sizes should be halved, the students demanded.

A representative of the Lycee Colbert said the school was open in the afternoon. There were similar protests at several other Paris schools, French media reported.

President Emmanuel Macron ordered France back into lockdown last Friday but he left schools open, unlike the first confinement in the spring.

It comes as France’s new COVID-19 infections were sharply down over 24 hours on Monday, as they always tend to do at the beginning of the week, but deaths and hospitalisations linked to the disease were sharply up again.

And while the country’s health director acknowledged the main French cities put under curfew mid-October were starting to see a lesser spread of the disease, he stressed the peak of the coronavirus pandemic was still to come.

“We are at a crucial moment,” Jerome Salomon told a news conference, as France was already more than 10 days in its second national lockdown aimed at reining in the virus.