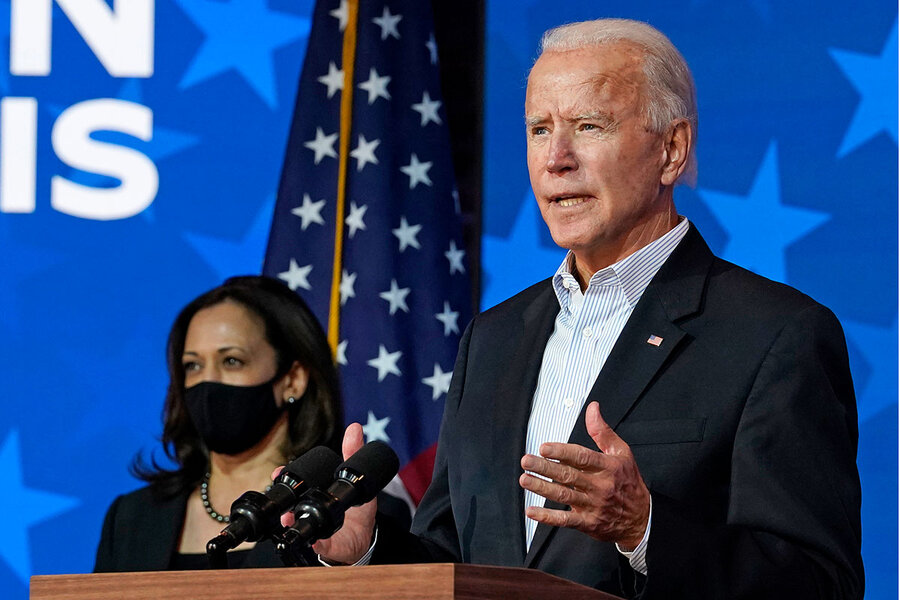 After a particularly divisive four years, the extreme wings of both parties are revved up, and any suspicions about the fairness and credibility of the election could lead to further agitation. But many others across the country – from voters to mayors to state representatives – see this election as a clear indication that trying to govern as if there’s a mandate for either party’s vision of sweeping change is not going to work.

Perhaps counterintuitively, the outcome that currently looks most likely – a Democratic president with a Republican Senate and more evenly balanced House – could provide an opportunity for America to regroup and see modest bipartisan progress. That’s in part because Mr. Biden has long-standing relationships with many Republican lawmakers, particularly Senate Majority Leader Mitch McConnell of Kentucky.

“Certainly a large part of the country is suffering from Trump fatigue,” says Ed Goeas, a Republican strategist in Alexandria, Virginia. “[Mr. Biden] has a real opportunity … to work from the center and not be pulled into what appears to be a desire on the part of the progressives to go to war.”

Still, former New Jersey Gov. Christine Todd Whitman, a Republican, emphasized the importance of not calling the election prematurely, even as it appeared increasingly likely that Mr. Biden would win.

“Every vote needs to be counted,” says Governor Whitman, the national chairwoman of Republicans and Independents for Biden, adding that the Trump administration’s court challenges should be taken seriously. “Those will need to be heard, so that people have confidence that it is what we want it to be – a free and fair election.”

Should the Senate remain in Republican hands while the White House goes to Democrats, Senator McConnell and a President Biden would become the nexus of power in Washington. The two have a strong working relationship and a long Senate history in common, including working on legislation targeting voter fraud. At Beau Biden’s 2015 funeral, the Kentucky senator was the only Senate Republican to attend.

Vice President Biden was Senator McConnell’s go-to negotiating partner in the Obama administration, together getting the country past the shoals of debt and fiscal crises. Around the White House, the vice president was called “the McConnell whisperer.” To the surprise of many, the Senate stepped up its productivity when Republicans took control in the last two years of the Obama presidency – working out deals on infrastructure, budget, education, and Medicare with Democrats.

Though the country has become increasingly polarized since then, both Mr. Biden and Senator McConnell are likely to be thinking ahead to how history will view them, says Steve Voss, a political scientist at the University of Kentucky in Lexington.

“So that’s an opportunity for them to not worry too much about the clamor among the noisy wings of their party,” says Professor Voss.

Still, Senator McConnell’s pitch to voters this year was to keep the Senate in Republican hands as a “firewall” against Democrats. “Mitch is not about public policy; Mitch is about power. Anything that makes Biden look good, he’s going to think twice about,” said former Democratic Sen. Heidi Heitkamp, in a preelection interview.

As majority leader, Senator McConnell would control the Senate agenda, and can be expected to block progressive priorities, including progressive Cabinet picks and judges, if Mr. Biden were to nominate them. The Kentucky lawmaker’s strength, said Senator Heitkamp, a centrist from North Dakota, is his tight control of his caucus. The way for Mr. Biden to break that is to work with individual Republican senators, such as Susan Collins, who won reelection in Maine, or Rob Portman of Ohio.

Senator McConnell may find it harder to control his caucus as a number of senators consider their own presidential bids in 2024. “There’s going to be a lot of competitive pressures on him. There will be [conservative] folks who want to burn the place down and moderates who will say, ‘We need to heal the country,’” said John Feehery, former spokesman under Republican House Speaker Dennis Hastert, also in a preelection interview.

By the same token, Mr. Biden could face significant pressure from “the Squad” and other progressive members of Congress who would have vastly preferred a President Bernie Sanders or Elizabeth Warren. But in that regard, Senator McConnell could become a useful foil, allowing Mr. Biden to blame the majority leader for stymieing a progressive agenda, rather than dealing head-on with intra-Democratic divides.

“Biden will have to take very modest baby steps in terms of policy innovation … if he’s going to get anything through the Senate,” says Charles S. Bullock III, a professor of political science at the University of Georgia. “[That] will frustrate the left wing of the party but also possibly give him an excuse for why he can’t go further left.”

If Mr. Biden begins his presidency by rekindling and building on relationships with his former Republican Senate colleagues, and they are game to work together, that could have a trickle-down effect to their constituents, says Martha Hennessey, a Democratic state senator in New Hampshire.

“If they are telling the people they represent … ‘This is OK, we’re going to give this guy a chance,’ … if they even give a hint of that – people will start to calm down, and breathe deeply,” says Senator Hennessey, whose party just lost control of both chambers of the state legislature in the nastiest election she ever recalls seeing in New Hampshire.

Determining how the country got so polarized – and whether it was driven or simply reflected by Washington – is difficult. But most political scholars agree a clear turning point was 1994, when Georgia Rep. Newt Gingrich led a Republican charge to take back the House. After years of compromising with Democratic-dominated chambers of Congress, he argued it was time for “trench warfare,” says Professor Bullock of the University of Georgia.

The GOP takeover that vaulted Mr. Gingrich into the speaker’s chair – and the no-holds-barred approach behind it – did not go unnoticed by other ambitious politicians, who began adopting similar techniques, on both sides of the aisle. During that time, more lawmakers also began keeping their families in their home states, coming to Washington only for weekday business and ending an era of bipartisan mingling over dinner parties and children’s soccer games.

“Gingrich gets a fair amount of the credit or the blame for what politics has become today,” says Professor Bullock.

Parallel to that, voters have increasingly “sorted” themselves into partisan camps that are both ideologically and geographically distinct, creating an urban-rural divide.

“We talk about the online echo chambers and ideological bubbles in which folks exist,” says Professor Voss, who describes himself as a radical centrist. But, he adds, if more voters lived among people who were different from them politically, “it wouldn’t have the power that it does.”

At the local level, some officials point out they can’t afford to let polarization stand in the way of fixing potholes or repairing the sewer system.

“I don’t know if it came out from Washington or we sent it back toward Washington,” says Donnie Tuck, the independent mayor of Hampton, Virginia. But wherever it started, it needs to be stopped at every level, from the president on down, adds Mayor Tuck, who makes a point of attending social gatherings and meetings with people who don’t agree with him. “We need leadership that will try to bring us together.”

Democratic Mayor Steve Williams of Huntington, West Virginia, who just won his third term with 62% of the vote in a deep-red county, points out that the oath of office taken by politicians is not to uphold a political party but the Constitution of the United States.

“That’s what this nation needs right now – put the nation first,” says Mayor Williams, whose city has become a national model for dealing with the opioid crisis, for which he credits his own community’s willingness to work together as well as support and funding from the Obama and Trump administrations.

“There are some people in Washington who want division, because as they push division on both the right and the left, more [campaign] dollars come rolling in,” he says. “Let’s … just start getting something done.”

“Once this election is finalized and behind us, it will be time for us to do what we’ve always done as Americans: to put the harsh rhetoric of the campaign behind us,” he said, calling for the nation to unite, heal, and come together. “I am campaigning as a Democrat. But I will govern as an American president. The presidency itself is not a partisan institution. It is the one office in this nation that represents everyone. … I will work as hard for those who didn’t vote for me as I will for those who did vote for me.”

He may have his work cut out for him, with many conservatives expressing doubt in the run-up to the election about whether he could or would hold off the increasingly energized left wing of his party, whose progressive agenda and stark discourse alarmed moderates.

Meanwhile, all eyes are on Pennsylvania as it tallies up the remaining ballots, cast by voters like Kim Davis.

She waited an hour and 15 minutes to vote in Glen Rock, but said earlier this week as she exited the polling place that she would have waited four hours if that’s what it took to exercise her right to vote. As in 2016, she cast her ballot for Mr. Trump, whom she described as the “lesser of the evils.”

Wearing nursing scrubs and walking back to her Mini Cooper, Ms. Davis expressed a desire for greater moderation on both sides.

“We forget that our end goal is serving the country, not serving a political party,” she said.

3 graphics tell the story of mass shootings during the pandemic